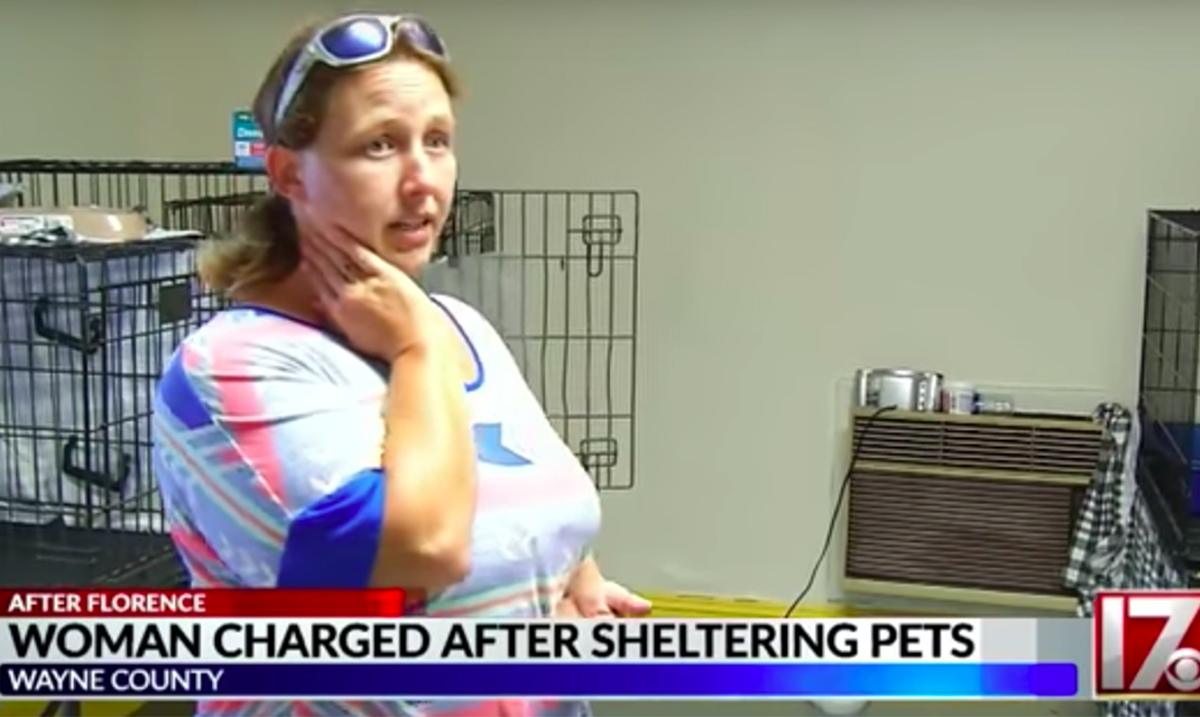 By Elizabeth DeVille September 24, 2018 No Comments

In the days and weeks that follow a natural disaster, stories of bravery and humanity often flood social media. We hear of people who went to great lengths to assist others or save the lives of animals in harm’s way. Unfortunately, it appears one such story has taken an unexpected turn.

With damage estimated at $17 to $22 billion, there is no denying the fact that Hurricane Florence left devastation in its wake. In fact, according to Moody’s Analytics, Florence is one of the ’10 costliest hurricanes’. With vast areas of the Carolinas reporting emergency conditions, Americans outside of the danger zone are glued to their television sets, watching as news pours in about the struggle and devastation faced by local residents. Amid the horrifying stories of loss, a few feel-good stories emerge to remind us that there is still good in the world.

One such story was that of Tammie Hedges and her North Carolina non-profit organization Crazy’s Claws n Paw. Hedges had been in the process of building a shelter just prior to Florence hitting the area. Seeing an opportunity to assist those in her area, she offered the space to local pet owners. Little did she know that her actions would attract some unwanted attention, culminating with her arrest.

“The goal was to make sure they were not out there drowning. We had an elderly couple, they were evacuating that afternoon, and there was no way they could take 18 animals with them,” Hedges explained to reporters. “We were trying to help abandoned animals. We knew North Carolina didn’t have any regulations or laws regarding shelters for animals. So a group of us got together to do something to help those animals is why we opened our building to them so they’d have a safe dry place to go until their owners returned to get them. I had not gone out and gotten any animals, but a couple independent rescuers had gotten some from flooded areas and brought them to me.”

In total, Hedges and her team housed a total of 17 cats and 10 dogs throughout the hurricane. However, as Florence passed, the storm was just beginning. Wayne County’s animal services managed called Hedges advising her that she need to hand over the animals in her car or he would get a warrant. The reason? She was accused of having operated a shelter without a permit.

While Hedges did have plans for the structure to become a registered animal shelter, during the time of the Hurricane she was merely opening her doors as a temporary emergency shelter. Volunteers were dismayed to learn that she was being penalized for trying to help in a highly dangerous situation for these animals.

“Since she had space, Tammy had not opened as a shelter, she just wanted to be able to provide a place for the animals,” stated Kathie Davidson, a volunteer with the organization. “Each one had its own cage or playpen, its own water, its own food, and cats had their own litter box. There was a kennel set up with pads that dogs could be taken to to use the bathroom. All of this was inside, dry as a bone. Someone stayed all night, so the animals were never left alone.”

During the time the animals were in her care, Hedges administered medication to some of the animals as needed, medication that the volunteers claimed was all available over-the-counter. The animals in question came to her either sick or injured and due to the hurricane, she didn’t have access to an available veterinarian.

Hedges’ supporters have set up a Go Fund Me page to help raise funds for the legal battle that she now faces, which (at the time of this article) has already raised over $17,000. The animals in her care have all been seized by Animal Control. The county issued a statement addressing the situation, saying: “Wayne County Animal Services turned the case over to the Wayne County District Attorney’s office based on suspicion of practicing veterinarian medicine without a license and presence of controlled substances. Ms. Hedges is considered innocent until proven guilty.” They advise that all animals seized have now been seen by a veterinarian, and they are currently working to reunite them with their owners.