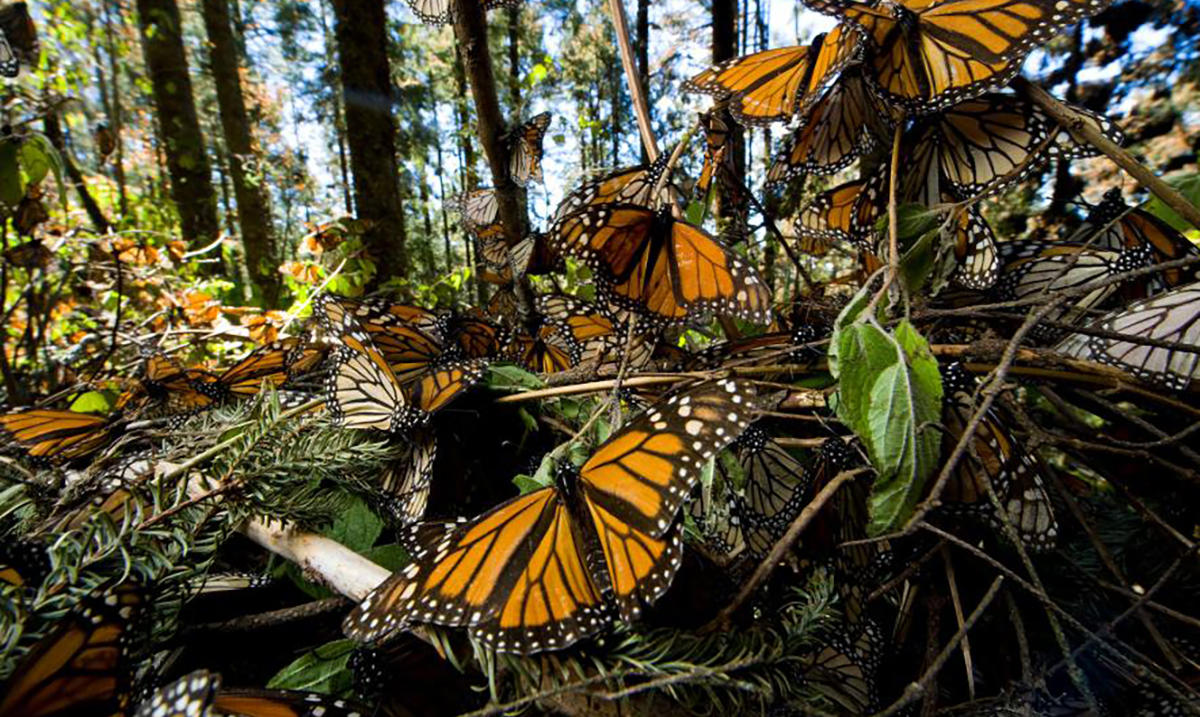 By Elizabeth DeVille October 4, 2018 No Comments

It’s a stunning sight that everyone should witness at least once in their lives, the annual monarch butterfly migration. As the cooler fall temperatures set in millions of monarchs take to the skies, headed for a winter-friendly location in the mountains of central Mexico.

The beautiful creatures may have originated anywhere across Canada and the United States, but they all come together in the Sierra Madre Oriental Mountains, where the tree cover of the oyamel fir trees provide a unique habitat where the temperatures remain not to cold, but also not too hot during the winter months.

Having witnessed the beautiful sight first hand in 1975, Canadian zoologist Dr. Fred A. Urquheart wrote, “I gazed in amazement at the sight. Butterflies, millions upon millions of monarch butterflies! They clung in tightly packed masses to every branch and trunk of the tall, gray-green oyamel tress. They swirled through the air like autumn leaves and carpeted the ground in their flaming myriads on this Mexican mountainside.”

As amazing as the sight, itself is, the whole migration will completely blow your mind when you learn that no one butterfly actually makes the trip twice. In fact, the butterflies that leave for Mexico in the fall are not the same butterflies that we will see return the following spring. Scientists are researching the phenomenon but have yet to explain exactly how the butterflies know where to go.

Each year, believed to be triggered by the shorter days and drop in temperatures, use the current air currents to help them travel from Canada and the United States all the way to Mexico. Here they will remain until the spring, when they fly as far as Texas to mate and lay eggs on milkweed plants. When these new caterpillars transform into adult butterflies, they then fly north, only travelling a few hundred miles before stopping to complete the process. In all, it can take as many as 4-5 generations of monarch butterflies before they reach Canada once again.

“Interestingly, the waves of monarchs headed north will complete their entire life cycles in just five to seven weeks each,” explains Pablo Jaramillo-Lopez, a research scientist at the National Autonomous University of Mexico. “But when fall rolls around again, a special ‘super generation’ of monarchs that can live up to eight months will make use of air currents to wing all the way back to Mexico – a seemingly impossible feat for such a delicate-looking insect. This makes the migrating monarchs so unique as they are the same species but for some reason live much longer.”

Unfortunately, experts report that the number of monarchs hibernating in Mexico has been on the decline. There are many theories for this including the increase in hurricane activity, destruction of their habitat, and unusual cold snaps that have struck in the spring recently killing off many of those who have already started their journey north.

If you haven’t had the chance to see this incredible sight first hand, you don’t want to miss this footage: