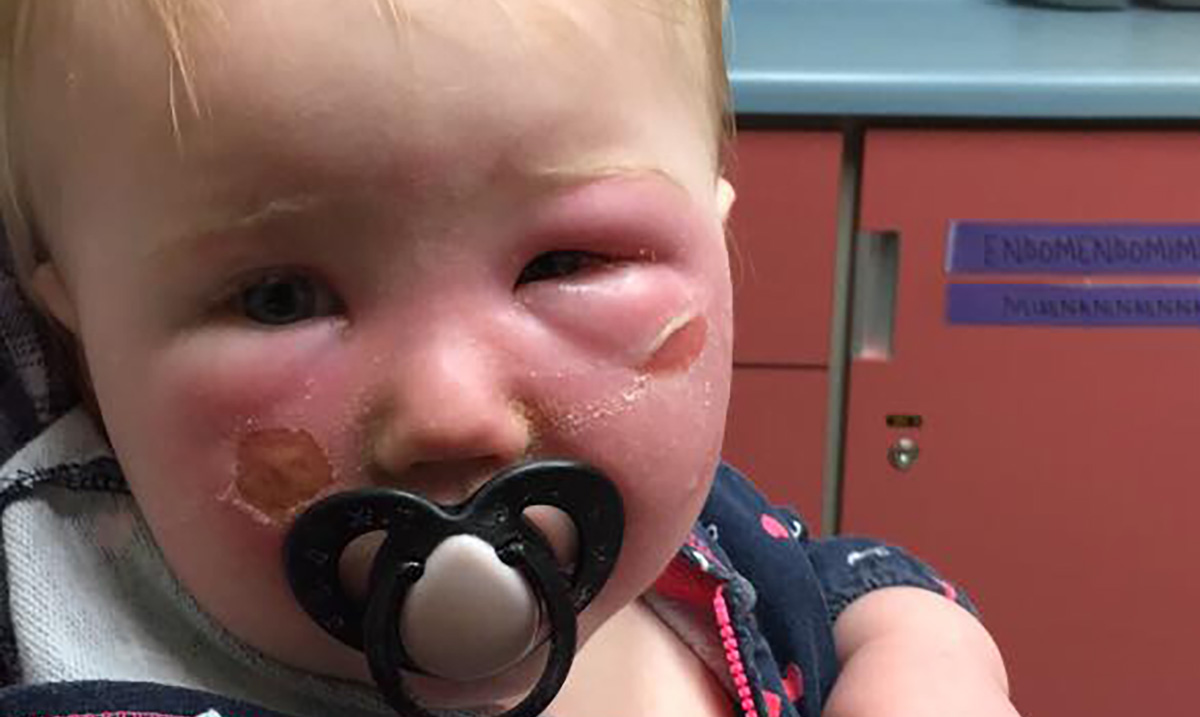 By Elizabeth DeVille November 9, 2018 No Comments

As a parent, you do everything possible to try to keep your child safe and healthy, but what do you do when the very safety precaution you attempted to put to use actually puts your child in danger? This is the nightmare that Canadian mother Rebecca Cannon experienced, and she hopes that sharing her daughter’s story on Facebook will warn other mothers.

Before taking her 14-month-old daughter Kyla outside to play, Cannon did what she believed would keep her child safe, reaching for the sunscreen. She was visiting family and had forgotten her usual go-to product, so she borrowed a can of Banana Boat SPF50 aerosol sunscreen from her sister. She did her due diligence, reading the label carefully, and seeing that it was stated to be safe for children 6 months and older, Cannon applied the product by spraying it into her hands and then rubbing it onto her daughter’s face. She wasn’t prepared for what would happen next.

“Her face gradually throughout the day got pinker. I thought it was just irritated from a different sunscreen, so I took her home and gave her a bath,” Cannon explained. “When she woke up the next day she was really swollen and blistering, so I took her to the ER.”

After an examination, the doctors informed Cannon that her daughter had a ‘caustic burn’ or a chemical burn from something in the product. The very product that was supposed to protect young Kyla from harmful sunburns actually caused a burn on the toddler’s face.

Cannon contacted Edgewell, the company that owns Banana Boat and reported the reaction. In return, the company sent her a check for $10, reimbursing her for the cost of the product. When contacted by various media sources about the safety of the product, the company ensured everyone that their products do undergo strict safety and quality testing prior to being put on the shelves. They also claim their products all have a neutral pH, which prevents them from causing any form of chemical burn and irritation.

However, dermatologist Alok Vij, MD explained that situation is a little more complicated. He advised that the burns may actually be a photoallergy – an allergic reaction that is triggered only when the chemical in question is exposed to the sun. While they are incredibly rare, this isn’t the first time that a photoallergy has been connected with the use of a sunscreen product.

“The thing that makes it harder to diagnose is that there are a lot of potential allergens in the chemical sunscreens,” Vij advised. “Fragrances, preservatives – a lot of ingredients that sunscreen companies use to make them spread more easily, absorb more quickly, essentially make them more elegant to put on the skin.”

Cannon updated all who were following her post, letting them know that Kyla had returned home from the hospital and was healing up well. However, she warns mothers to learn from her ordeal, adding “please watch and be careful when using aerosolized sunscreen! I have done a lot of research since coming home and have found a disturbing amount of cases like ours.”