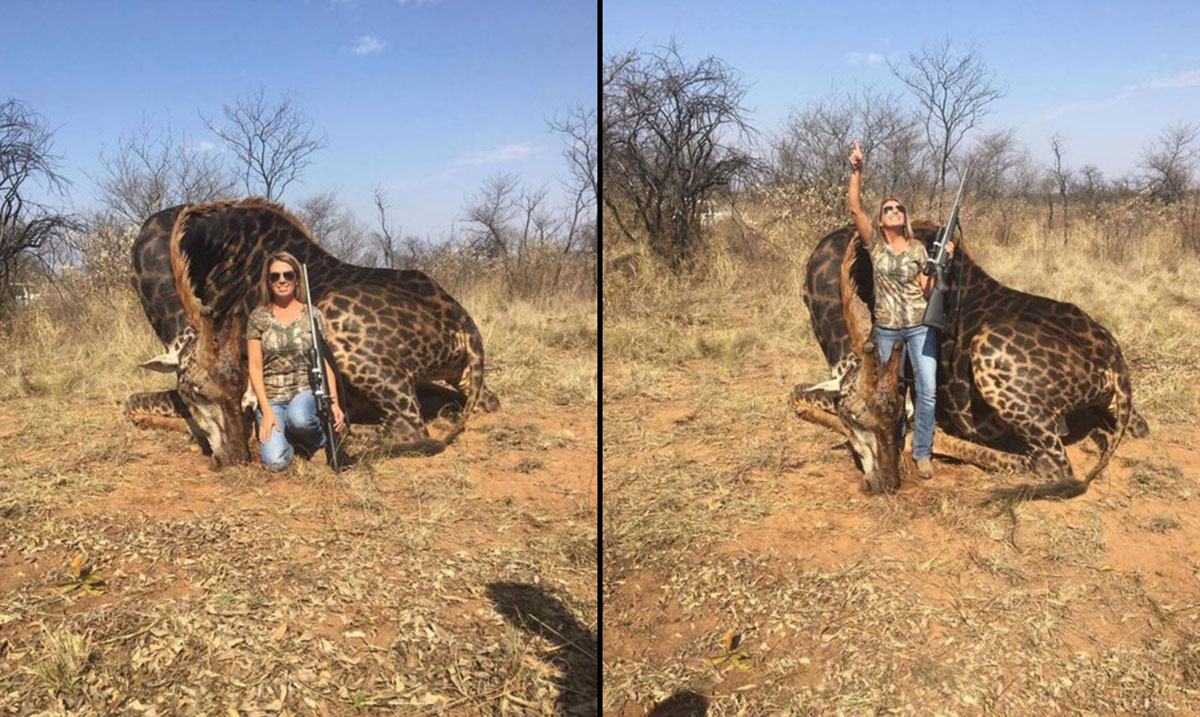 There is no denying the fact that certain content on social media can trigger great debate, including the posting of pictures by trophy hunters with their recent kills. However, one Kentucky woman has caused significant controversy when her recent hunting pictures included the body of a rare black giraffe.

The concept of ‘trophy hunting’ has long been considered controversial, and experts say that this opinion isn’t going to change anytime soon. Those who support the activity view it as a sport, arguing that when done properly it isn’t going to have an adverse effect on the species, after all, they are killing so few. Furthermore, they point to the poor communities that rely on this industry to survive. However, critics argue that it’s unnecessary killing of innocent animals, and any killing is going to be detrimental to our current efforts to save many of these species from potential extinction.

While there is no clear and universally accepted answer at present time, there are a few rules that trophy hunters generally adhere to: No unnecessary torture or pain inflicted on the animals and avoid the killing of rare or endangered species.

Recently, however, a couple photos that made their way to social media have been met with a greater amount of outrage and anger than usual. Why? The pictures shared on Twitter by South-Africa based AfricLand Post show Kentucky hunter Tess Thompson Talley alongside the body of a rare black giraffe. The caption? “White american savage who is partly a neanderthal comes to Africa and shoot down a very rare black giraffe courtesy of South Africa stupidity. Her name is Tess Thompson Talley. Please share.” And share they did…

White american savage who is partly a neanderthal comes to Africa and shoot down a very rare black giraffe coutrsey of South Africa stupidity. Her name is Tess Thompson Talley. Please share pic.twitter.com/hSK93DOOaz

In the comments, AfricLand added “If our so called governments can’t care for our wildlife then its time we stand up and responsibility of our continent, lands, resources and wildlife… share share share! and lets have a united voice against pillage of Africa, it’s the only home we have”.

The tweet has been shared over 48,000 times to date and received over 9000 comments, most sharing nothing more than complete disgust. Some have even gone as far as to search out more information about the Kentucky woman, sharing other hunting photos, as well as photos that they allege are of the woman’s home full of taxidermy.

In an effort to clear her name and her reputation, Talley spoke with Fox News in an email stating, “The giraffe I hunted was the South African sub-species of giraffe. The numbers of this sub-species is actually increasing due, in part, to hunters and conservation efforts paid for in large part by big game hunting. The breed is not rare in any way other than it was very old. Giraffes get darker with age.” She went on to explain that the 18-year-old bull was too old to breed and had allegedly killed 3 younger bulls of breeding age, further adding to her argument that her actions were in the best interest of the species as a whole.

However, her critics aren’t buying her explanation. Taking to social media to share their outrage, they are not only putting the pressure on Talley but all big game hunters as well as the government, calling for the end of trophy hunting by wealthy Americans. Is it time for further legislation, or will this practice be put to a stop completely? Only time will tell.