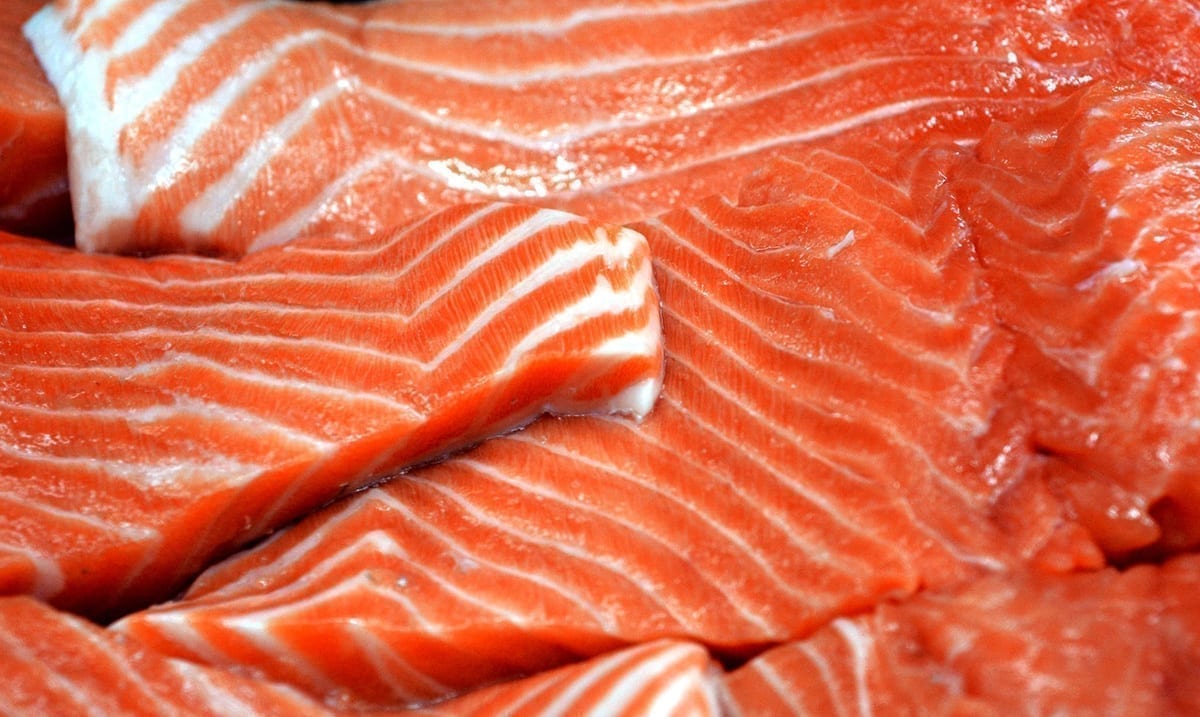 Genetically Engineered Salmon Is Supposed To ‘Hit Shelves’ This Year

As we have touched on before GMO salmon has been approved to be sold here in the US but not many people know how to spot it. Sure, for many fish is a very important source of protein and more but we all deserve to know what we’re eating and where it’s coming from.

While you can read more about this approval by clicking here, it’s something we’ve been hearing about for a good long time now. When it comes to this kind of thing it’s important to know some of the basics behind it. Genetically modified salmon are unique because they are farmed instead of being caught out in the wild. They grow year-round and also grow much quicker than they would on their own. This happens because they are given growth hormones and those hormones are things lots of people consider as being controversial at best.

All of that having been said, this kind of thing could be a good alternative if done properly and without those hormones. You see, overfishing is a big issue in the world today and with things like pollution causing trouble, we could be making a difference if we were not so set on doing things in a way that makes them quite ‘unnatural.’ The company farming these salmon, AquaBounty actually believes that what they’re doing could be seen as a solution to a lack of salmon which many seem to agree with.

On their website, AquaBounty actually notes their products are in ways working to conserve wild fish populations and that when farmed in facilities close to major ‘metropolitan areas’ these salmon reduce carbon emissions because they do not have to travel as far to get to the market. See, even things like this do have some small upsides.

All of this having been said, that doesn’t mean you have to eat it if it does end up hitting the shelves. You can still opt for wild salmon and there is nothing wrong with asking for a source before purchasing your meats or eat them in restaurants. While on some occasions this genetically modified fish might slip through the cracks and make its way to your plate if you eat healthily overall and do your best to opt for fresh foods you should be just fine.

Not everyone is okay with the fact that these specific fish reach market weight in half the time of those in the wild and they don’t have to be. The FDA has approved this for sale and sure, in the past some questionable stuff has been approved but right now we don’t quite know how questionable this specific thing is. When you take into consideration the things already out there this salmon doesn’t sound too bad, does it?

Megan Thompson told PBS as follows about these fish and the company behind them:

Aquabounty first applied for approval from the U.S. Food and Drug Administration in 1995.

While it’s been regulating genetically modified plants for more than 25 years, the FDA had never approved a genetically engineered animal as food before. And so it took them two decades to make a decision.

And, there was stiff opposition – protesters sent nearly 2 million comments to the FDA and nearly 80 retailers vowed not to sell it.

Despite the concern, in 2015, the FDA approved Aquadvantage salmon, saying the product is “safe to eat,” “has no significant impact on the environment” and it found “no biologically relevant differences” between GE salmon and other farm-raised salmon.

The next year the Canadian government gave the salmon its stamp of approval, and Aquabounty hit the market there first, since selling a modest 20,000 pounds of its product. Canadian opponents remain outraged.

At the moment we don’t know what it’s going to do in the long-run and that might be scary to some people. It should be noted that there are no requirements that GE salmon be labeled as such so asking questions is always your best bet. I for one will be doing my best to keep it off my plate but if you want to give it a go, have at it.

To hear more on this topic take a peek at the video below. It goes a lot deeper than most realize and is worth looking into. GMOs are overall something we are hearing less and less about but that doesn’t mean they’ve gone anywhere.