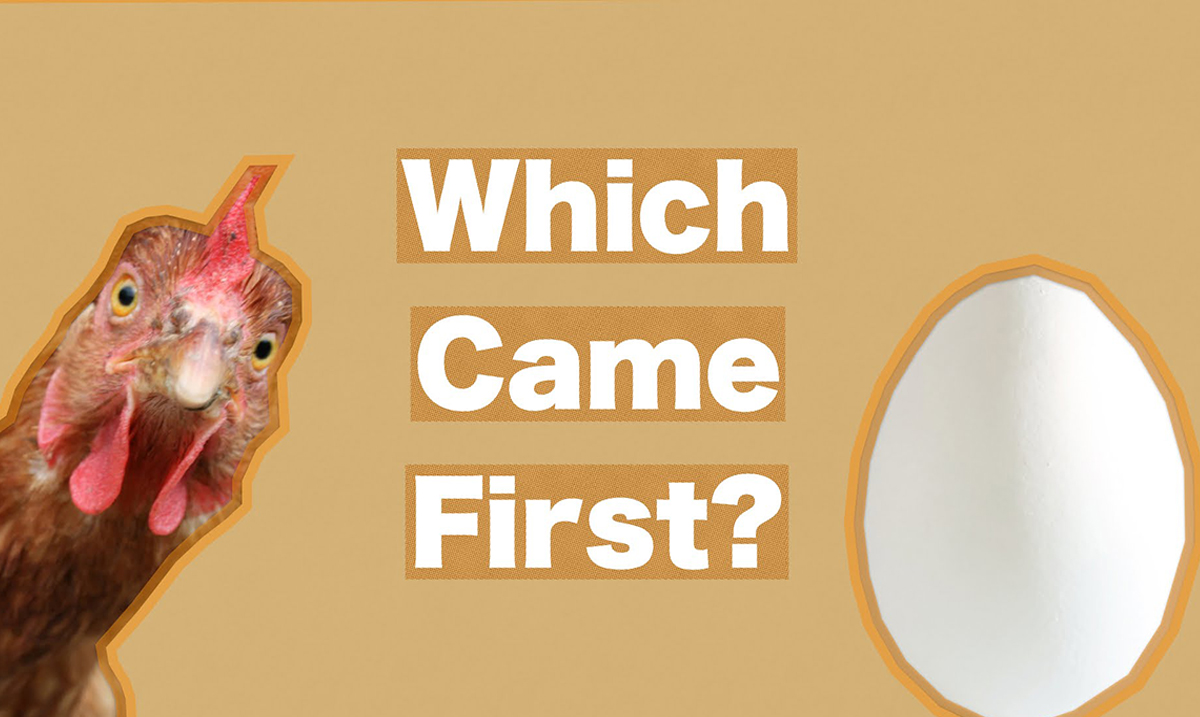 Finally, the Age Old Question Has Been Answered: Which Came First the Chicken or the Egg

By Elizabeth DeVille October 9, 2018 No Comments

It’s one of the oldest debates known to man, the discussion of which came first, the chicken or the egg. Starting as young children arguing the facts on the playground, right through to modern day scientists searching for irrefutable evidence to support their theories, it’s a debate that means so much more than just the surface level question.

It may seem silly, all this time and energy spent on understanding something as seemingly unimportant as chickens and their first appearance here on Earth. However, at the root of the debate experts will tell you that it doesn’t really come down to chickens at all. Why are we so invested?

It’s a concept known as ‘infinite regression’. We are faced with two clear and definitive truths that we have come to accept as fact. All chickens come from eggs, and at the same time, all eggs come from chickens. However, if we try to trace this backward we will find ourselves stuck in a loop with no end. While the debate largely surrounds the existence of chickens and eggs, it can be expanded and applied to any species that exists here on Earth. It can even be applied to our own existence, and herein lies our fascination.

Philosophers and Religious Leaders Point to the Chicken

It shouldn’t surprise you that religious leaders believe the answer lies with the chicken, as all living things were placed here by the hand of God. Therefore, the first chicken didn’t require an egg, it was created by God himself and placed on the planet. From here, it would then produce eggs and the cycle would begin.

This idea of one original chicken to start it all is also shared by philosophers. The theory, known as the ‘unmoved mover’ was first introduced by Aristotle, explaining that before any one thing came into being there was an eternal energy or motionless substance that predated life. This energy has always existed and will always exist. From it we find the first chicken, ‘Chicken Prime’. This original being, Chicken Prime, requires no explanation for its existence as it was never ‘born’ or ‘hatched’. Instead, it is accepted that as part of this universal energy, it simply always was in existence.

The philosophical theory doesn’t stray far from the religious belief; however, it doesn’t describe that eternal energy a being that of a God or an all-powerful being. Instead, it attributes this energy to the Universe as a whole. However, these theories require placing belief in something that cannot be irrefutably proven. There is no way to prove the existence of God or the Universal Energy. Those who subscribe to this thought simply have to trust in their belief that it makes sense.

Scientists, However, Argue It’s the Egg

Unlike philosophers, scientists aren’t happy settling with ‘belief’ without proof. Instead, they seek a solid answer backed by evidence. When the debate is approached from this angle, the answer is significantly different… Scientists argue that it was the egg that came first. How did they come to this conclusion? By looking to the theory of evolution.

From a scientific standpoint, evidence shows that our modern birds evolved from dinosaurs, slowly adapting to their life in the skies. In fact, scientists state that the evolution from dinosaurs to birds can be traced through the existence of therapods, like the archaeopteryx. Eventually, as evolution occurred, two of the chicken’s ancestors, wild birds that predated the domesticated chicken that we know and see today, would lay an egg. From that egg would hatch the first chicken, a combination of the DNA of these two wild birds, with its own unique mutations. As this bird then laid its first eggs, this would start the cycle.

Ultimately, it comes down to the question – do you side with the philosophers or the scientists?