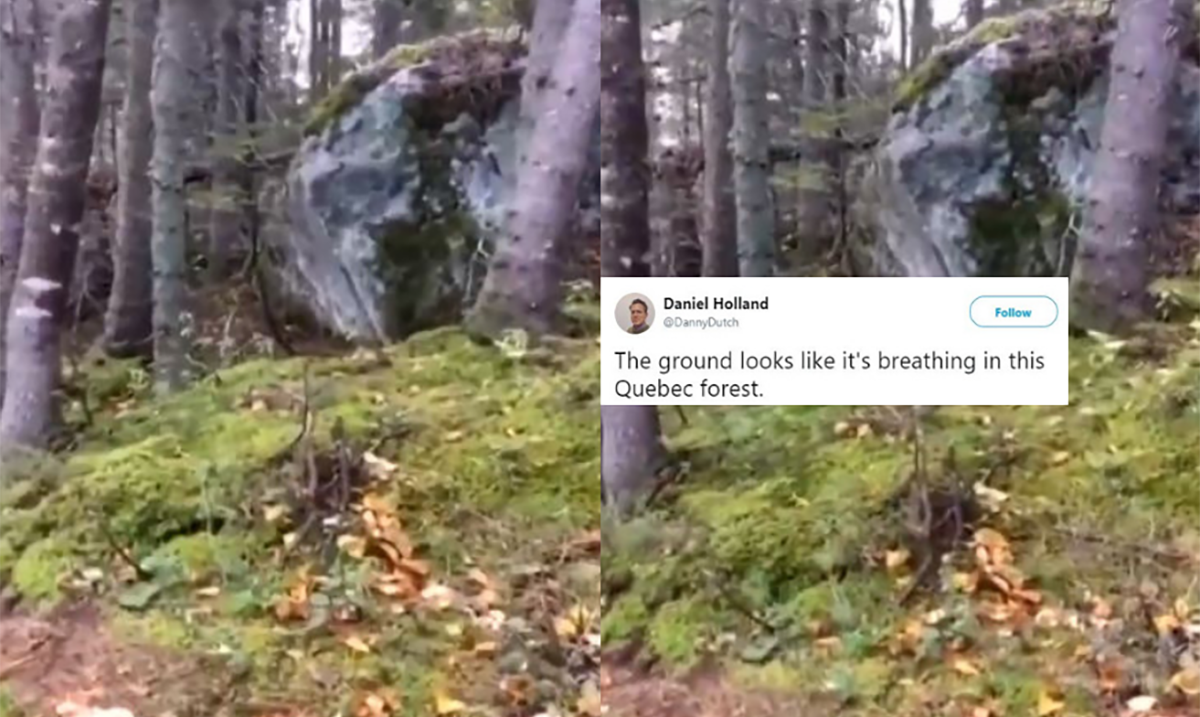 Creepy Footage Shows A Forrest that Appears to be Breathing

By Elizabeth DeVille October 30, 2018 No Comments

With Halloween just around the corner, there is no shortage of ‘interesting’ or ‘creepy’ videos circulating the internet. It makes it very difficult to tell the difference between which are real, and which are merely imagination and creativity at play.

Earlier this month blogger Daniel Holland shared a video from the forest of SacreCoeur, Quebec. While that may not seem like anything crazy, it’s not the location that is responsible for the video going viral. Holland captioned the video with, “The ground looks like it’s breathing in this Quebec forest,” and his description couldn’t be more accurate. In the video, the ground and the trees that are rooted within it move up and down as though they were planted upon the chest of a large giant. The movement isn’t small either!

To date the video has been retweeted over 30,000 times, leading to over 4 million views. The responses include a wide range of thoughts and emotions, from fear and concern to fascination and disbelief. Some even refer to the giant turtle from The Neverending Story. However, one thing remains true throughout all of the comments – no one seems to be quite sure of what’s actually happening.

Rest assured, Mark Sirois of the Southern Quebec Severe Weather Network has provided us with an answer, one that is corroborated by other meteorological experts around the globe. It’s nothing mystical or magical, in fact, there appears to be a relatively simple answer. “When you look at the trees in the background, it’s clear that the winds were very strong,” stated Sirois. “The forest floor seems to be moss-covered, which leaves a lot of the root system of younger trees lodged in a loose medium. As the wind sways the trees, you get the roots lifting the floor. This gives the appearance of ‘breathing’.”

In the Tweet, Holland advises that while he shared the video, he didn’t take it. Instead, it appears that it was submitted to the Weather Network by an individual named Tonie from Fort St. John, British Columbia.

“During a rain and windstorm even the ground becomes saturated, ‘loosening’ the soil’s cohesion with the roots as the wind is blowing on a tree’s crown,” explained Mark Vanderwouw a certified arborist at Shady Lane Tree Care in Newmarket, Ontario. “The wind is trying to ‘push’ the trees over, and as the force is transferred to the roots, the ground begins to ‘heave’. If the winds were strong enough and lasted long enough more roots would start to break and eventually some of the trees would topple.”

This isn’t to say that the trees around us don’t ‘breathe’. In fact, it’s well known that we are reliant on trees and plants, as they have the capability to take in carbon dioxide, releasing the oxygen that we require to survive. However, there is no inhaling or exhaling involved.

The ground looks like it’s breathing in this Quebec forest. pic.twitter.com/AeETAYJOdN