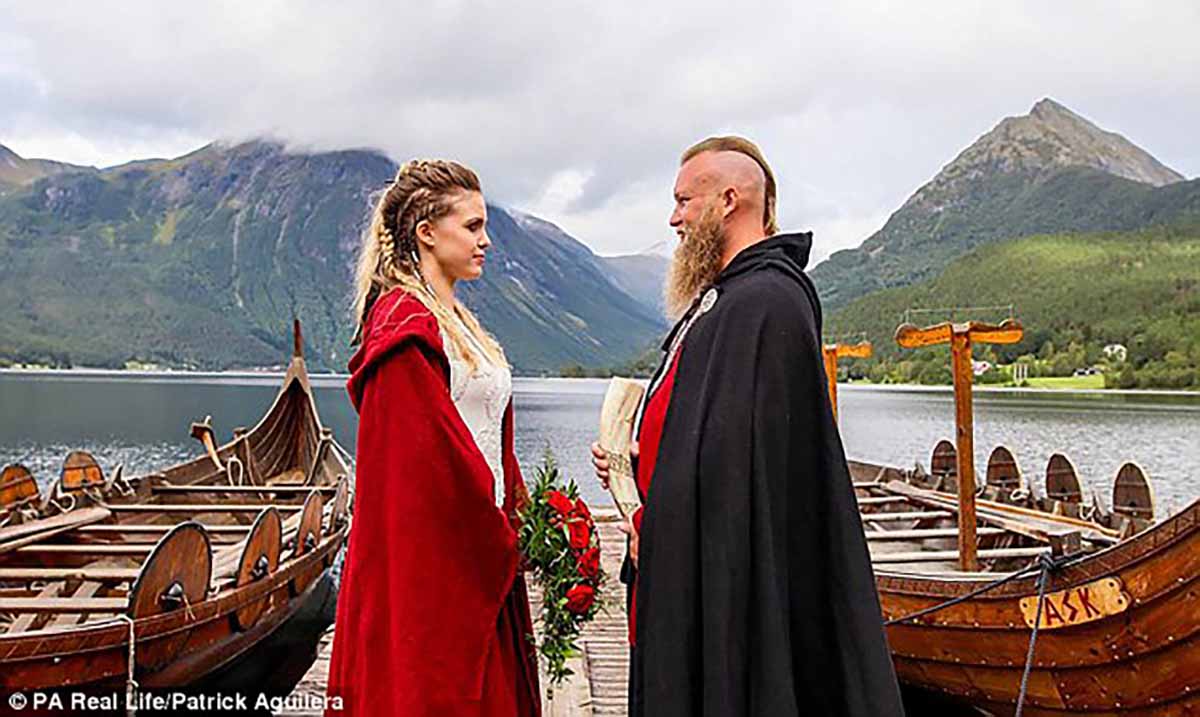 By Elizabeth DeVille October 22, 2018 No Comments

Today’s weddings have taken on a new life, with couples embracing their individuality. While some will opt for a traditional Christian ceremony, others will choose to tie in other unique beliefs and interests. This was the case as Elisabeth and Rune Dalseth set to planning their upcoming nuptials.

Rune Dalseth was raised in a very typical American home. “I come from a very Christian family. When I announced that we were not going to have a Christian wedding my mum was a little unsure about it. But I think she has now come to accept it. She can see how happy paganism makes me and how it has helped me get my life together,” stated Rune. “Before I was a Viking, I didn’t have a wife, a baby and a house – now look at me.”

It was when she met Rune in 2016 that Elisabeth was first introduced to the world of Vikings. A culture that is often judged and criticized, the Dalseths, along with the 6000+ other members of the Norwegian Viking revitalist movement, are determined to break through these stereotypes and shine a light on the true beliefs of the Viking way of life, a lifestyle that they say is completely different from the violence, rape, and pillage that first comes to mind for most people.

“Rune completely opened up a new world for me,” Elisabeth said, “and I soon fell in love with the people and the spirituality of it.” In fact, the Dalseths embraced the culture so much so that they named their son after the legendary Viking Ragnar Lothbrok. The two took part in Viking festivals and events, celebrating the culture together. It was at one of these festivals that Rune popped the question, and Elisabeth couldn’t have been happier. As they started to consider their options, they quickly realized that they wanted nothing more but to honor their shared beliefs and exchange vows in a traditional Viking wedding.

The nuptials took place on the banks of a Norwegian lake, where the two used specially made longboats as their means of transportation. Rune arrived at the location early in the morning with 10 friends. Here they set sail, as would have traditionally in the 10th century, returning back for the ceremony once the heart the sound of a hunting horn beckoning them. The ceremony itself was conducted by a pagan priest known as a ‘gothi’.

The couple then took part in a traditional ceremony known as the ‘blot’ ritual. Elisabeth explained, “This is when a cauldron of blood is put on top of a pile of stones. The blood is then drizzled over little figures of the gods and then across the forehead. It is supposed to symbolize the union of gods and people.” Following the ceremony, the couple and their guests would celebrate over a traditional wild hog roast feast and the customary honey beer drank. It has been said that this was the first traditional Viking wedding to be practiced in nearly 1000 years.

While the couple admitted that some of their guests didn’t completely understand their choices, a great time was had by all. “Some of the people who came were a little skeptical about it at the start, but by the end, they could all feel the energy and the love that we generated,” advised Elisabeth. “I think if you go to a wedding like ours, you will definitely think differently about what it is to be a Viking.”

Check out these beautiful images from the ceremony: 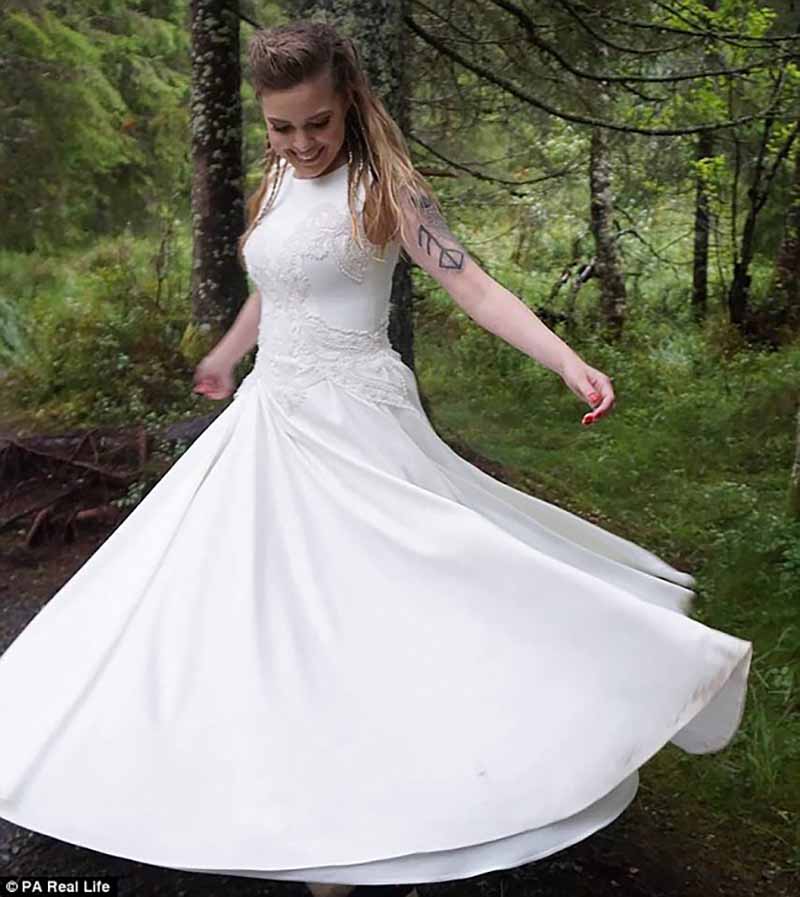 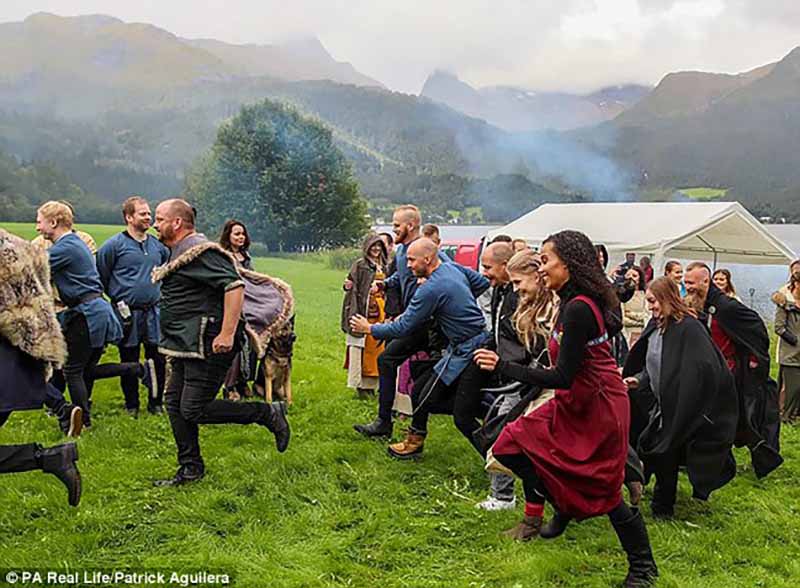 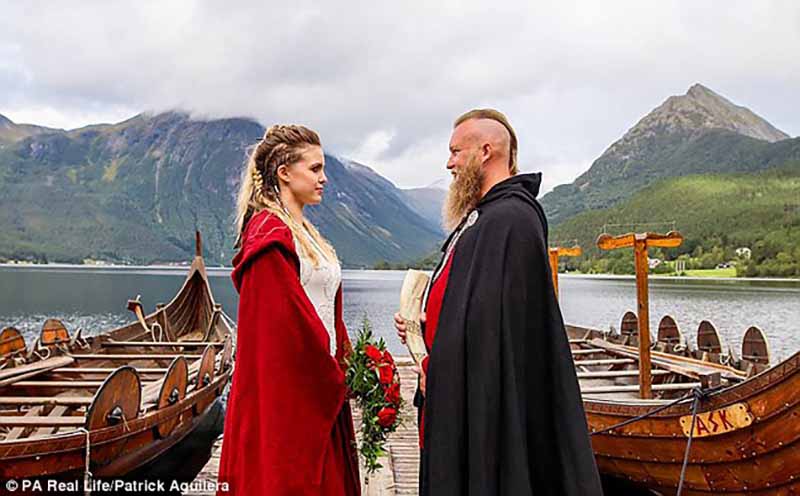 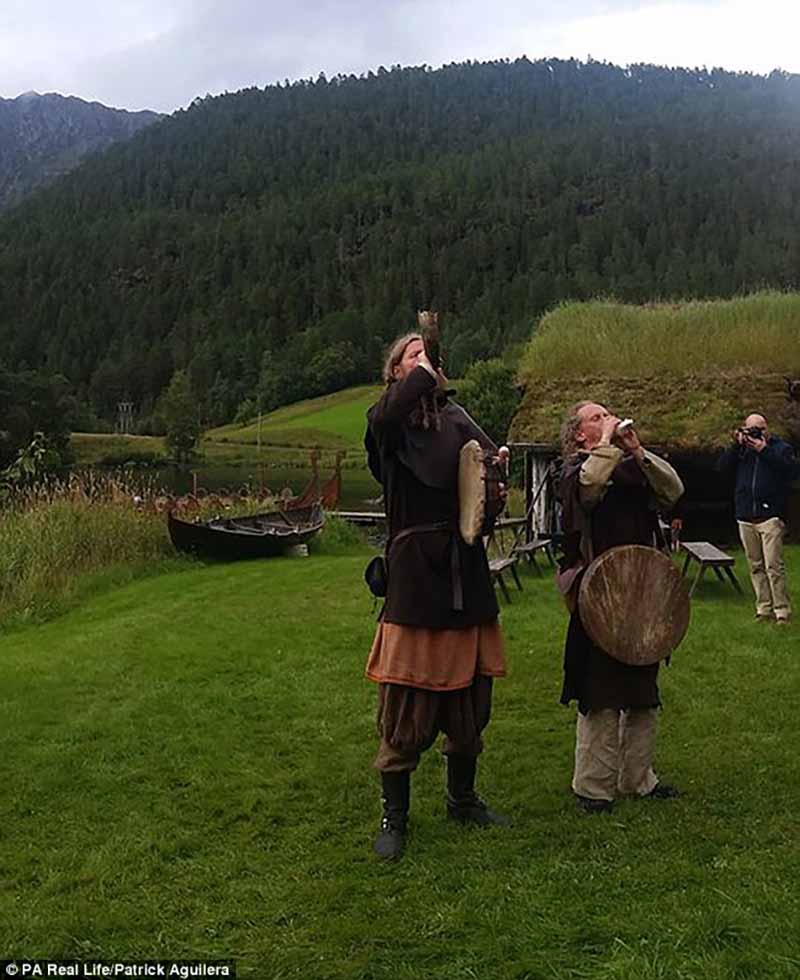 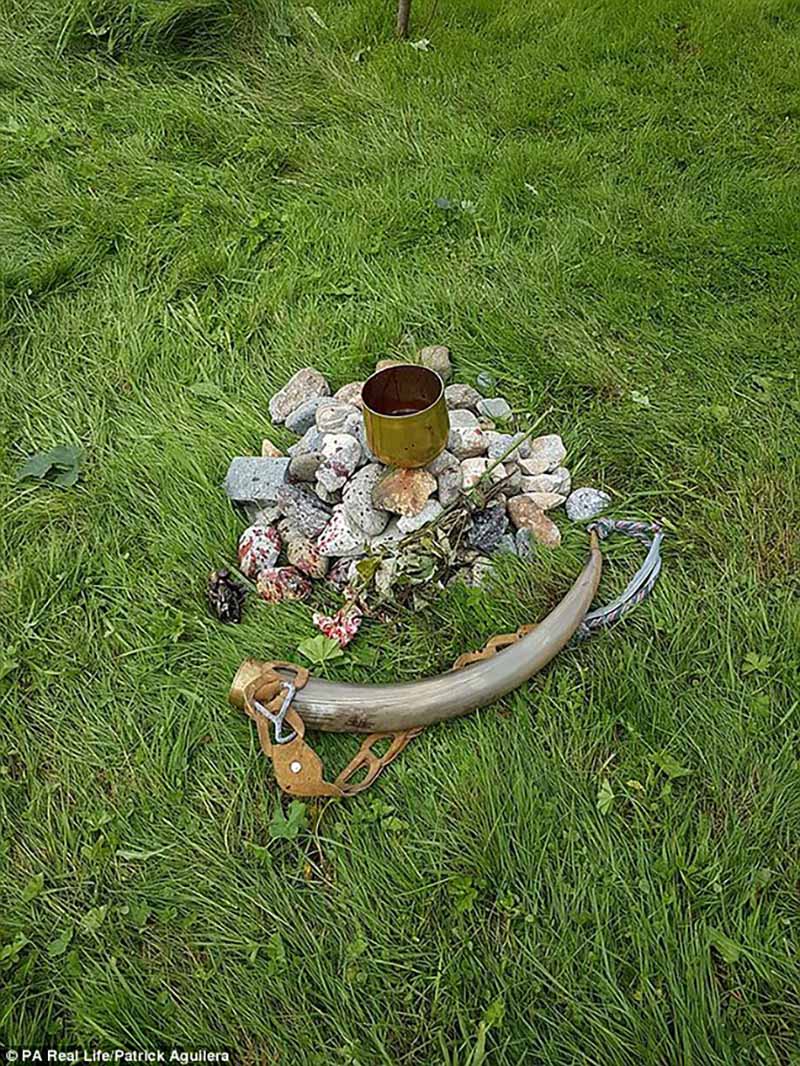 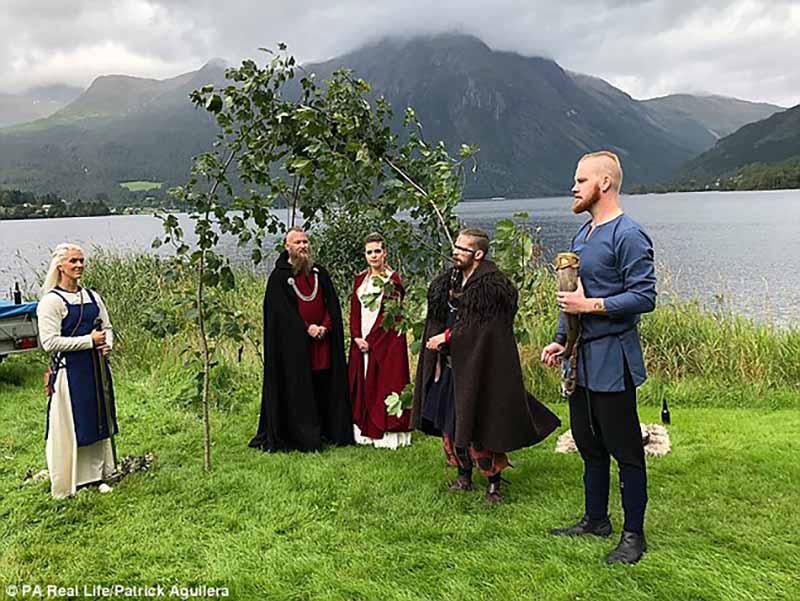 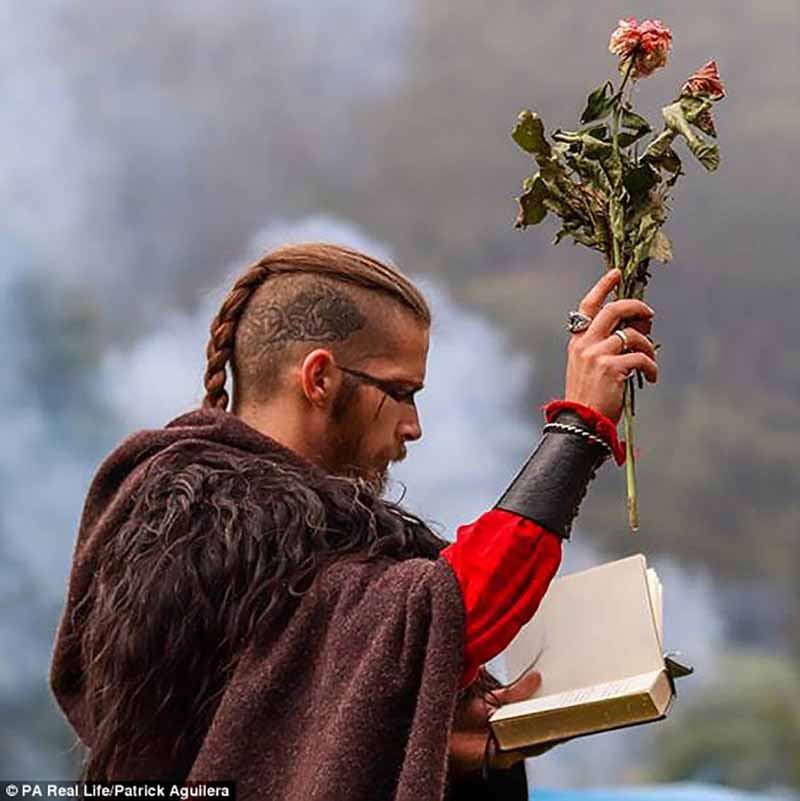 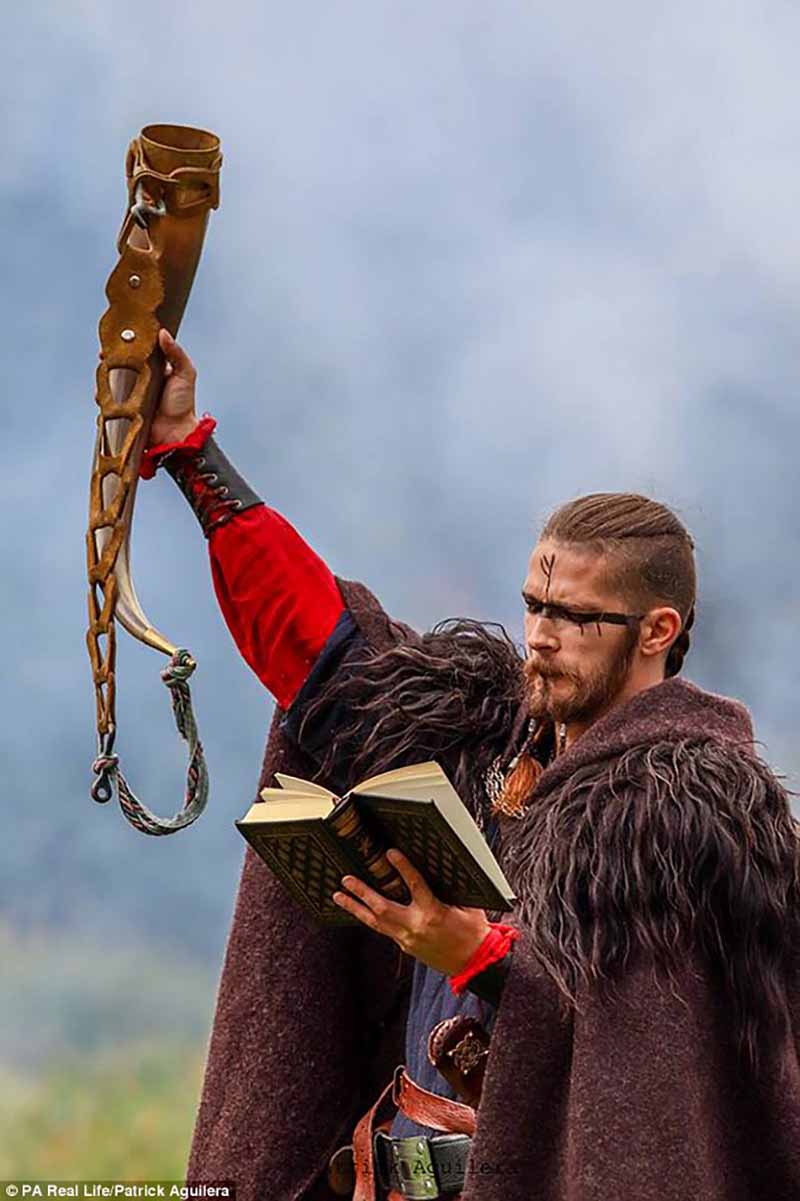