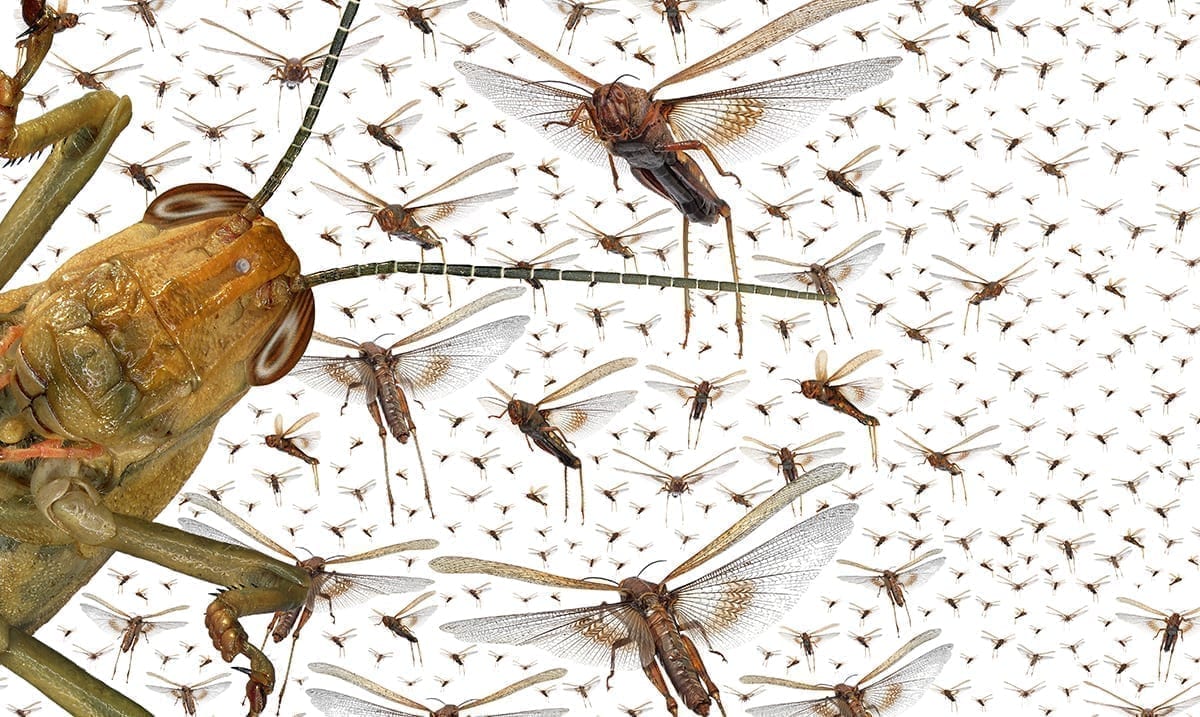 By Gerald Sinclair April 5, 2020 No Comments

As if there wasn’t already enough going on in the world right now, it seems a pest outbreak in East Africa could be causing many to go hungry. While your average swarm of locust can destroy crops ton an extreme, this is something that Sky News is calling the worst swarms in 25 years.

According to Sky News, one of these swarms alone measured about 37 miles by 25 miles in the country’s northeast. These insects are devouring crops at a mind-blowing rate that could if things do not change soon leave many in a bad situation. These locusts are specifically desert locusts which are considered as being the most dangerous, and they’re affecting places like Sudan, Ethiopia, Somalia, and more. This making the food crisis in this region much worse and destroying hundreds of thousands of acres of crops.

Sky News has reported that this increase in swarms could last until June and if it does continue on for that long, we do not know how devastating the effects will be. This only getting more intense at the moment as flight restrictions because of the novel coronavirus have delayed pesticide deliveries in the region where the locusts are doing their worst.

Al Jazeera wrote as follows in regard to these flight restrictions and the damage these locusts are doing:

The curbs have delayed deliveries of pesticides and, at the current rate of spraying, stocks in Kenya will run out within four days, Cyril Ferrand, FAO’s head of resilience for Eastern Africa, told Reuters news agency on Friday.

The curbs have delayed deliveries of pesticides and, at the current rate of spraying, stocks in Kenya will run out within four days, Cyril Ferrand, FAO’s head of resilience for Eastern Africa, told Reuters news agency on Friday.

The first invasion that hit farmers in a region where millions of people struggle for food has given birth to a second wave of insects just as new-season crops are being planted.

“They are very active, very voracious, and very mobile,” Ferrand said. “If we don’t have pesticides, our planes cannot fly and people cannot spray and if we are not able to control these swarms, we will have big damage to crops.”

In Kenya, the FAO was now looking to secure pesticides from local sources, Ferrand said, should the delays continue.

The spreading of the new coronavirus has forced governments to close their borders, reducing cargo flights and disrupting global supply chains, including the production of pesticides in Europe and Asia.

According to Business Insider as of late February of this year, these swarms had already destroyed around 170,000 acres of crops in East Africa but I am sure that number has only grown since. Just one of these massive swarms could eat enough food in one day to feed over 30 million people, that’s the amount of damage we’re looking at right now. As this continues, things are not looking good.

While the UN has appealed for money to tackle this crisis, the issue itself is nowhere near over yet. Numbers of locusts could increase four hundredfold by June according to BBC as they are eating their own body weight in food every day. Right now aerial and ground spraying together are the only things make any real difference along with the tracking of these swarms.

For more information on this please check out the videos below. While we might be caught up in the coronavirus since it’s all we hear about on the news, there are other things going on in the world right now as well. Please keep those affected by the serious issues before us whether they’re virus related or not in your thoughts, things are bound to get worse before they get better.