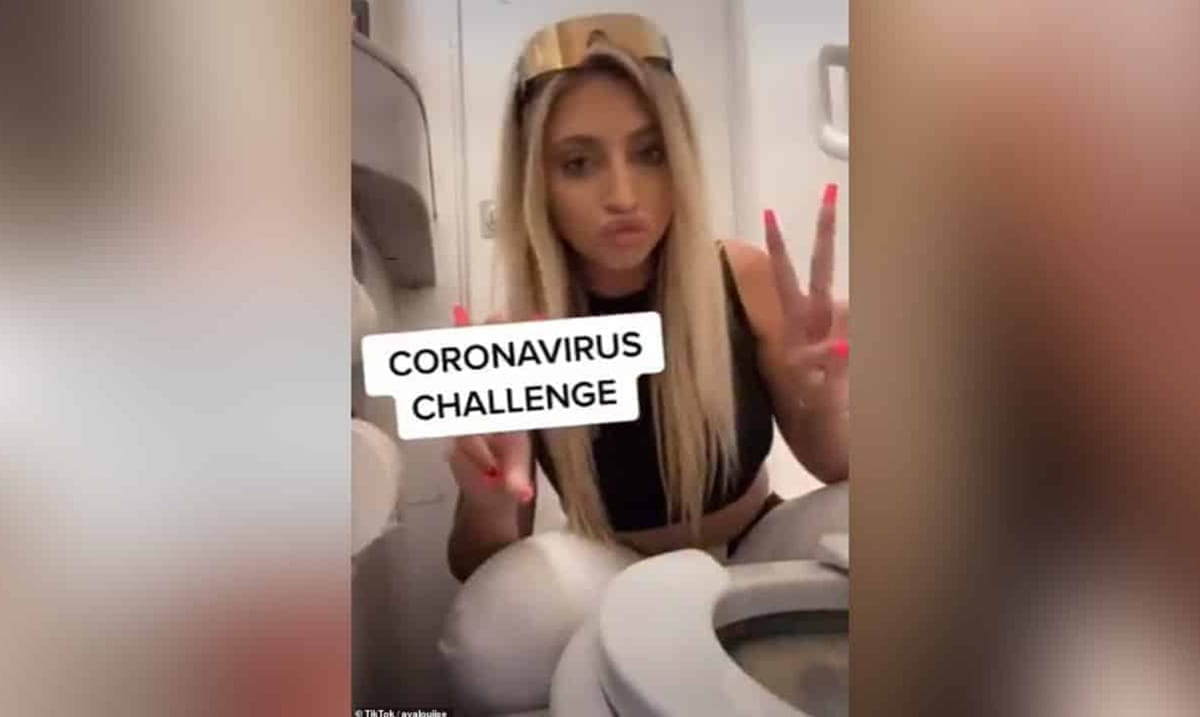 Yes, throughout the years we have seen the rise and fall of some horrendous internet challenges but this one takes the cake. The ‘clout’ you may hope to gain by doing this is not worth it, I promise.

Just weeks ago a woman was slammed online for posting a video doing something she called the ‘coronavirus challenge.’ In that video, she licked an airplane toilet in an attempt to downplay the seriousness that is contracting the coronavirus. This was shared on TikTok around March 14th and is not something anyone should be doing, there are more threats on toilet seats than just the possible coronavirus, I assure you of that.

The girl mentioned above who did all of this was and is Ava Louise who was according to GlobalNews.ca flying to Miami when she did this. While she doesn’t seem too bothered by the backlash she has received, it has probably affected her on some level as it would anyone. As you can see below it was also posted to her Twitter account with the caption “Please RT this so people can know how to properly be sanitary on the airplane”.

Please RT this so people can know how to properly be sanitary on the airplane 🥰😅 pic.twitter.com/x7GX9b4Lxc

That being said, she told the Miami Herald that the toilet seat wasn’t your average overused toilet seat basically in saying that “It was a clean toilet seat on a sugar daddy’s plane.” Now claiming to have ‘trolled’ America she doesn’t seem to feel bad for anyone she may have influenced to do similar things to try and gain attention. That being said, it does not appear that others are going to be so careless.

According to the Miami Herald, this was what Louise shared with them:

“I trolled America,” she said. “Like, it was a clean toilet seat. On a sugar daddy’s plane.”

Louise, who is in Miami for an indefinite amount of time on vacation, says she is feeling perfectly healthy.

“I feel hot, rich and iconic. If those are the symptoms of corona then b—-, I’m ill!” (For the record, there is apparently no other “coronavirus challenge” floating around.)

Louise believes that the incident was blown out of proportion and wants to go on “The View” to chat with McCain personally.

“She should have me on,” said the aspiring singer. “It’ll be the best ratings they have ever had.”

In times like this, it is quite disgusting that people ‘joking’ around in such a manner. While the vast majority isn’t engaging in this kind of thing there have been a couple of other TikTok personalities engaging in the ‘coronavirus challenge’ that have also made headlines. What is this world coming to?