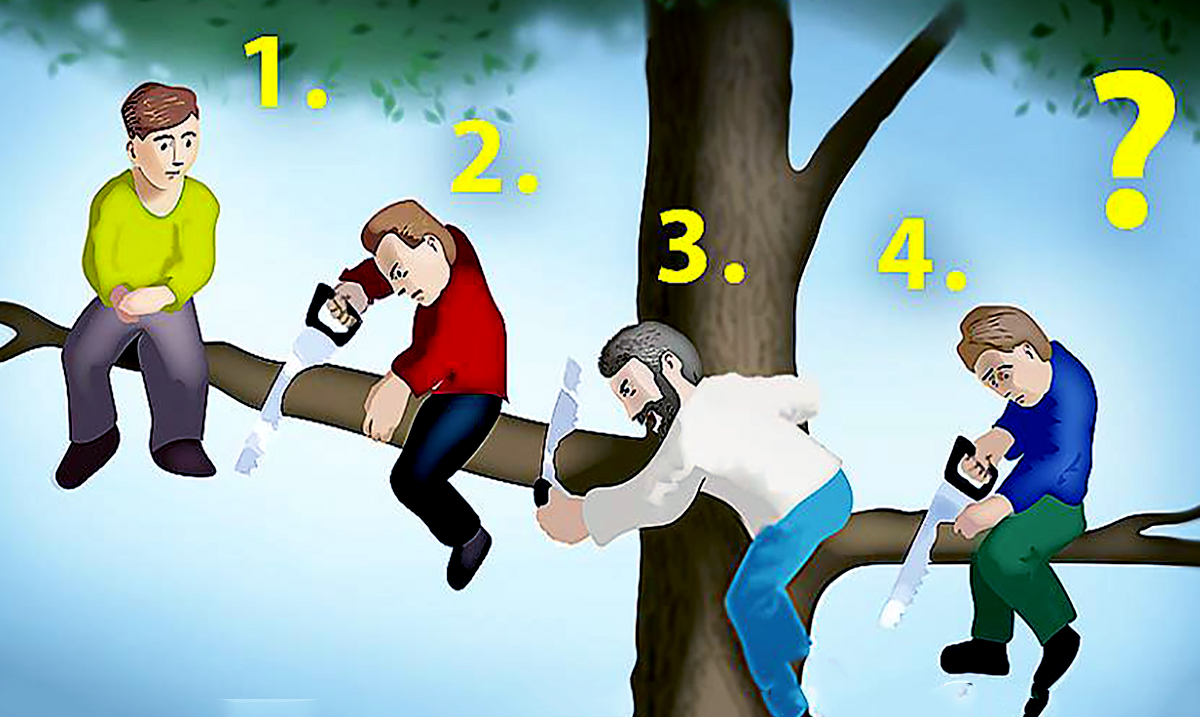 Who Is The ‘Dumbest’ Person In This Picture?

Sure, we all have our own opinion on things but when it comes to viewing things from outside perspectives not everyone is capable. Seeing things from the views of others is far harder than we tend to realize.

No matter what you’re looking at it can be taken in different ways depending on whom you are and how you’re looking at it, right? This is why there is so much conflict and controversy in the world we call home. I recently came across a post in the Epoch Times that touched on this and in that post, there was an image of four people in a tree. One of those four people was just sitting while the other three were trying to cut different parts of the tree. While this might not sound like much, it holds more meaning than any one of us will be able to truly fathom.

Below you will find that picture, as you look at it really think about which one of the four people is the ‘dumbest.’ Do you think the first one is the dumbest or perhaps the last? What makes you choose the one that you choose?

Well, you might be surprised to find that there is no real correct answer in who the ‘dumbest’ of these people is. This is something that boils down to perspective and no matter how many times you work through it I doubt coming up with the same answer as everyone around you will be possible. While most people will argue that number one is the dumbest, there are also tons of people who will argue that number four is or perhaps number two. Below I am going to break each one down a bit so that a basic understanding can be made.

Person one is doing nothing while two people are racing to cut the branch down that he is sitting on. Those who choose this answer are most likely the kinds of people who think based off of logic and are aware that nothing is going to resolve itself. That being said, is there much that he could do at this point?

Person two is ignoring the person who is trying to cut him down only to try to cut person one down, in doing this he is putting himself at risk just to get done what he feels he needs to do. Many people will argue that you should never put yourself at risk regardless of the situation or how heated you are in the moment.

Person three is at the best position in the tree and will most likely leave the situation alive before any of the others will. He is about to end the lives of or seriously injure both person one and person two but ignoring the person suffering behind him. However, making it out of this is going to put him in a bad situation as he will most likely end up in prison. He is ruining the lives of not only the two who are going to be cut down by his hand but also the one behind him he is failing to stop and his own as prison is not a place full of roses by any means.

Person four is only ending his own life and leaving the rest to do whatever it is they end up doing. He is only thinking of himself but also most likely going to be the one who leaves the least repercussions behind. He merely wants out of the situation and is ready to get out regardless of the means he has to take to do so, right?

After reading through this who do you think the ‘dumbest’ person in the image is? Personally I am going to go with number three but still many opt for number one. Is there one that you feel is smarter than the rest or are they all stuck between a rock and a hard place?