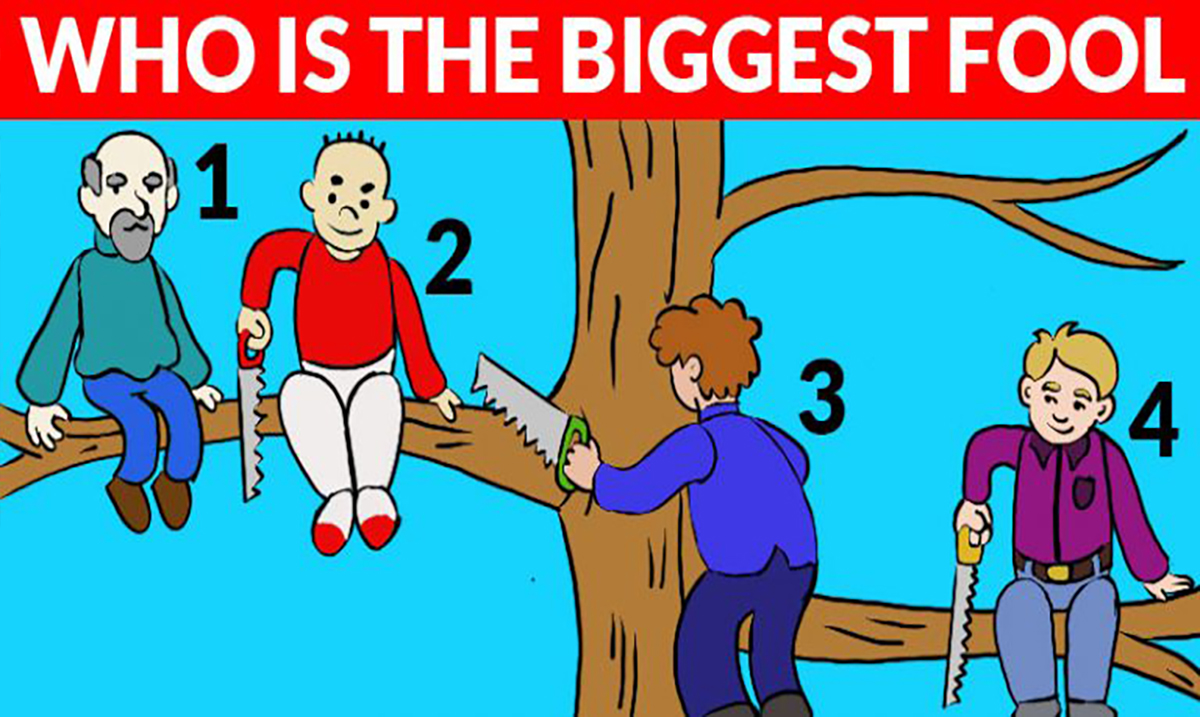 Who Is The Biggest Fool? Your Answer Will Reveal Your Hidden Personality

By Gerald SinclairDecember 9, 2019No Comments

As we have gone over time and time again, tapping into our subconscious or hidden minds can really bring a lot about us to the forefront and while this particular situation is a bit different, it still follows the same concept. While it might seem like some people are doing better in this image than others the more closely you look the more you will begin to notice.

In the image below there are four men present. Each man is numbered and all but one are using hand saws. They are up in a tree and each one seems to hold his own intentions. 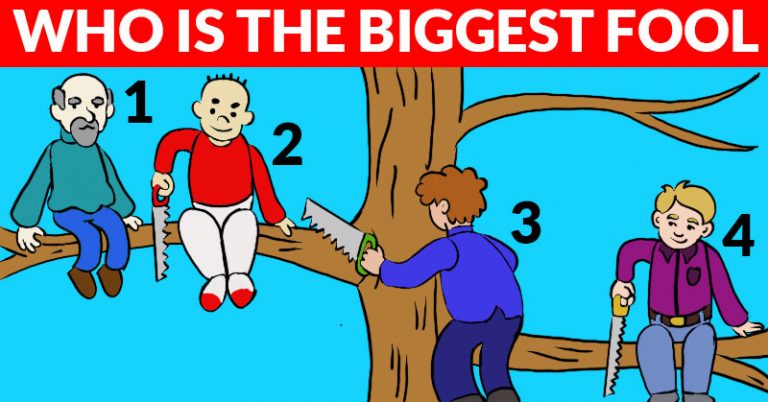 Which man is The biggest fool out of all four? While you might initially think it is someone specific the more you really dive into each person and what they’re doing the more hectic the image itself will become. Give yourself a long moment to decide who is the biggest fool overall and then take a peek below to see what that reveals about your own inner workings and mind.

Man number one is just sitting on the end of a branch to himself with no saw to be found. While he seems content he is about to fall to his death as there are two people in the process of cutting him down. The fact that you chose him makes it quite clear that you are not as compassionate as you should be.

While you are quite loving you don’t take action towards others when it comes to your own well-being and that is a big issue. Perhaps you’re in serious need of some self-care. Life doesn’t have to be so cut and cry.

Man number two might be in a better position than man number one but at the end of the day, he’s putting his own ‘revenge’ in front of saving himself. Rather than making an effort to keep the man with the dark brown hair from cutting him down he is working to see the older man (number 1) fall first. The fact that you chose this man reveals to us that you are someone who struggles with letting go.

You do not know your own limits and you because of this end up in some pretty messed up situations. As time passes you can work on this but it will not be easy. Sometimes you just have to know when walking away is going to benefit you the most.

Man number three is in the best position but also seems to be doing the most damage. He is cutting two people down while leaving one to cut himself down. He isn’t showing anyone any compassion and is being quite a toxic person overall. This man doesn’t have anyone in mind but himself and it shows.

Because he doesn’t care about others he is placing himself in a position that will leave him quite lonely. Since you chose this one it tells us that you’re not the kind of person who is as willing to hear others out as he or she should be. You struggle to close yourself off and shut your mind down so that you can let other people speak and it is something you’ve had a problem with for quite some time.

Man number four is not hurting anyone but himself and seems to have a very comfortable look on his face, right? Well, because number three has his back turned we can assume he and number four are on good terms thus meaning four falling will hurt him on some level. Number four is trying to damage himself and leave others unharmed and to some, this is the smartest while to others it makes him the biggest fool.

Because you chose him as the biggest fool it reveals to us how important to you making the most of each day is. You are a very goal-oriented person who works hard and has a lot to achieve. You know that when things get rough and you’re struggling, working to hand in there as best you can is crucial.