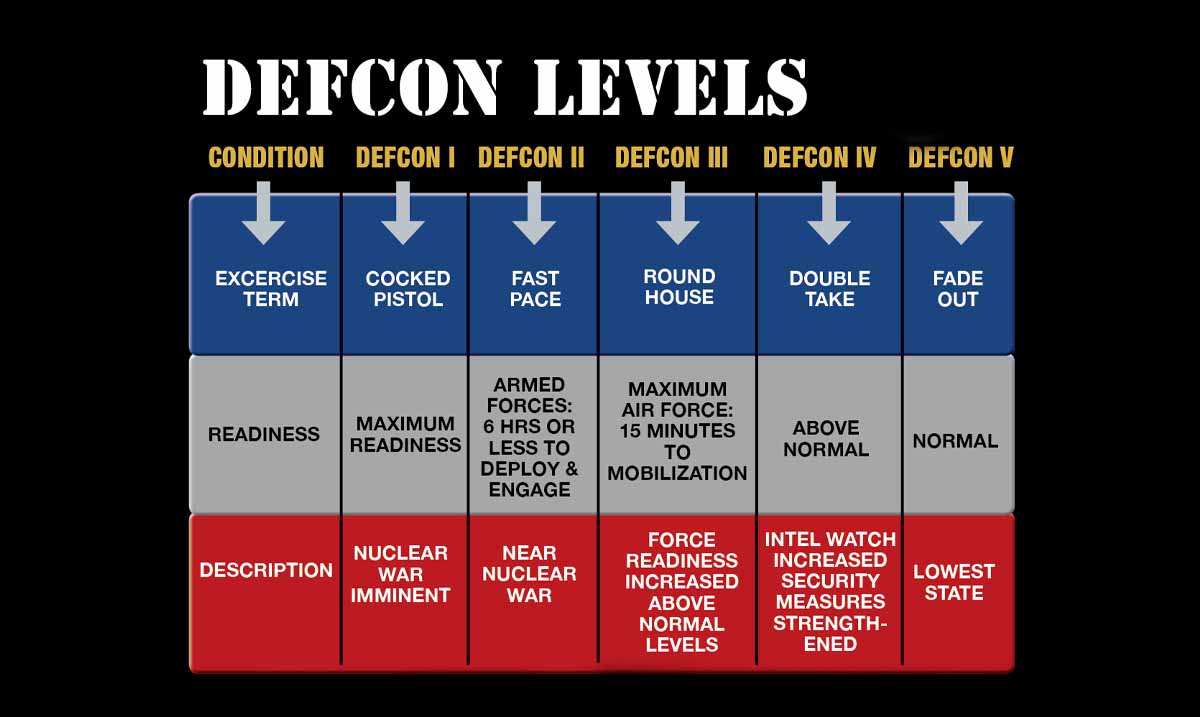 What Is Defcon And What Do Defcon Levels Mean?

Recently, there has been a lot of talk of war, nuclear disasters, and other national security issues in light of the recent Russian invasion in Ukraine. And for good reason, as our current Defcon level sits at 3.

Defcon stands for Defense Condition and is a warning system created by the U.S. intelligence organizations that were created to keep the world updated on current events and threats.

Defcon 2/ Fast Pace: Armed forces are ready to deploy and engage in less than six hours. Next step to nuclear war.

Defcon 3/ Round House: Air force ready to mobilize in 15 minutes. Increase in force readiness above that required for normal readiness.

Defcon is an American-based system that is used by the American federal government. Threat levels change based on current world events, military threats, and nuclear threats. Sometimes, Defcon levels can be raised just in certain parts of the military, or for military bases, or government institutions.

The last time the level was lowered below a 3 was during the Cuban missile crisis, in October of 1962 when it was placed at level 2. It has never been a level 1 in the history of the Defcon level’s existence.

In light of the Russian invasion of Ukraine, the topic of Defcon has come up in various articles across the web. One topic is revolved around Russia’s version of DEFCON, which has its stages that have not been made public. In a recent Tweet, Dmitri Alperovitch, the founder of The Alperovitch Institute for Cybersecurity Studies at Johns Hopkins University and former chief technology officer of cybersecurity group CrowdStrike, said that Russia has four levels. According to him, Putin made recent orders to raise Russia to an elevated level, which is similar to the second level of the U.S.

For now, the U.S. stands at Defcon 3, however, with the current conflict that doesn’t seem to be getting resolved by recent peace talks, we could see that move to a 2. For now, it’s best to keep a watch on it.