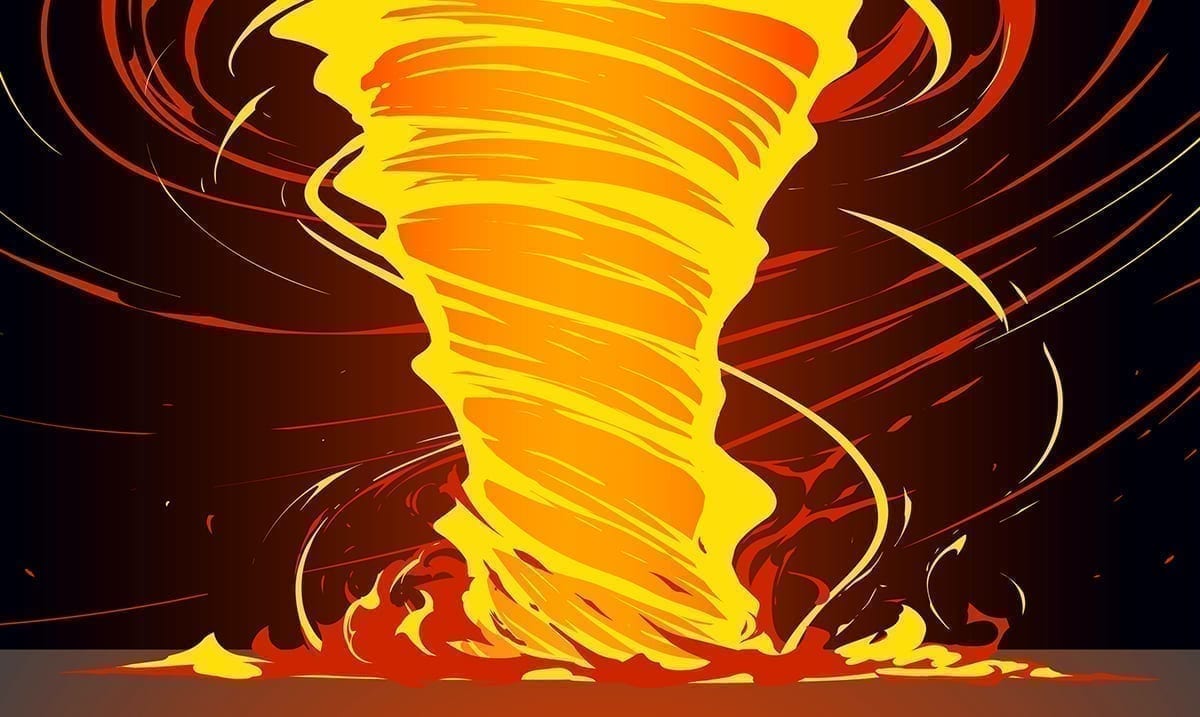 The fires burning through the West right now are relentless and things are only getting worse, or so it seems. As this serious issue continues to persist and those fighting to get these flames under control do their best, conditions do not seem to be in anyone’s favor.

While the idea of a fire cloud or a firenado sounds a bit out there, these are things we see on occasion during situations like this. A firenado is just extreme fire activity overall that are generated when the heat from a wildfire itself causes the hot air off of it to rush from the ground upward. From here it can send flames rotating in a sense. This is especially dangerous as we must let them run their course and cannot do much about them.

Now, on the other hand, fire clouds are a bit different. According to USA Today, fire clouds are pyrocumulus clouds. They are clouds that form overheat sources and cause their own ‘storms.’ Sure, they can bring rain, but they also bring dry lightning depending on where they are and what conditions they’re presented within.

One of these not so common firenados was spotted in California back in August, and we surely have not seen the end of them considering all that is going on right now. Sure, things might be intense and those in the West are going through a lot right now but there is still hope. As those who are working hard to get things under control continue to do-so things have to get better at some point.

According to 12 WFMJ, these fires are growing bigger and moving faster than most we’ve encountered before. They are being driven by drought and as temperatures continue to rise they are moving more and more quickly. With so many areas up in flames, this year only feels like it’s getting more and more devastating with each passing day.

21 WFMJ wrote as follows on this topic:

When it comes to California wildfires, it now takes days, not decades, to produce what had been seen as a once-in-a-lifetime occurrence.

Last weekend, a fire burning in California’s Sierra National Forest exploded in size, trapping hundreds of Labor Day holiday campers who could only be rescued by helicopters that made a series of white-knuckle flights into the smoke. Fire officials said they’d never seen a fire move so fast in forestland — 15 miles (24 kilometers) in a day.

On Wednesday, a wildfire in Plumas National Forest northeast of San Francisco spread 25 miles (40 kilometers) in a day and devoured an estimated 400 square miles (1,036 square kilometers),

In between those events, a massive fire in Monterey County doubled in size overnight, trapping 14 firefighters who had to deploy their emergency shelters; one was critically injured.

They are only the latest examples of what a half-dozen fire experts agreed is more extreme fire behavior driven by drought and warming temperatures they attribute to climate change. Among the most concerning developments is that fast-moving wildfires leave less time for warnings or evacuations.

Recently “we have seen multiple fires expand by tens of thousands of acres in a matter of hours, and 30 years or more ago that just wasn’t fire behavior that we saw,” said Jacob Bendix, a professor of geography and the environment at Syracuse University who studies wildfires.

To learn more about all the things going on right now in the West take a look at the video below. We all need to be keeping those in these areas in our thoughts as we move forward. Things like this do so much more damage than most could ever wrap their heads around.