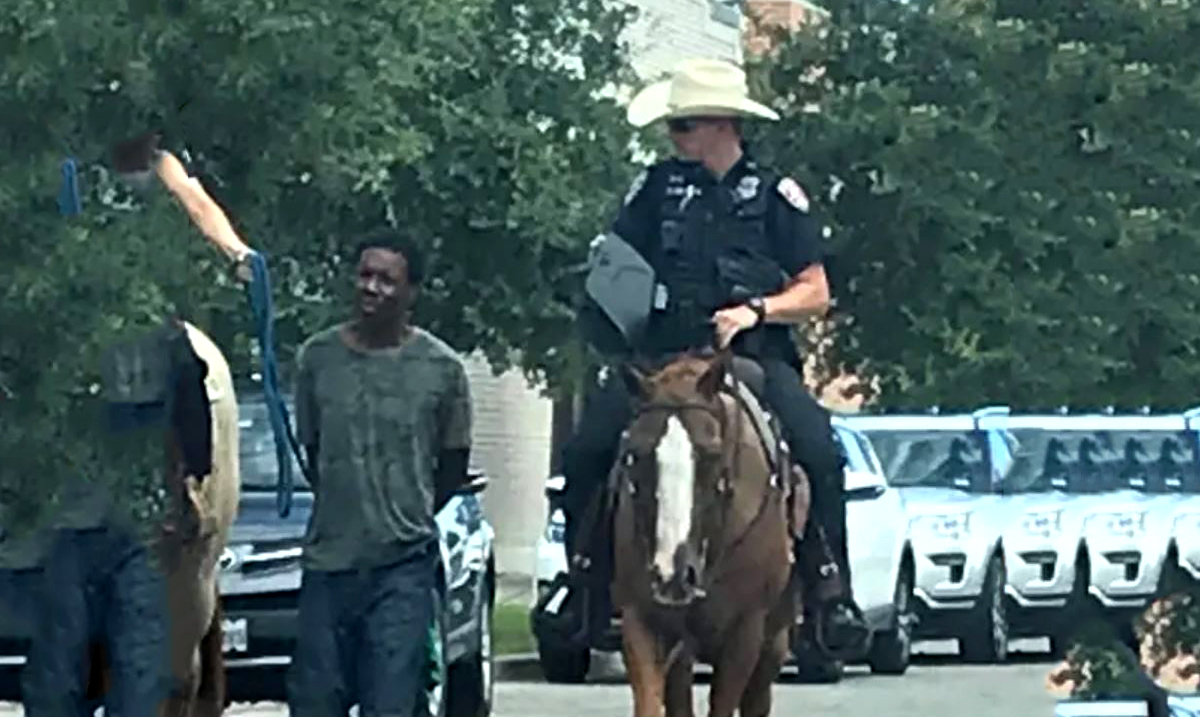 By Gerald Sinclair August 7, 2019 No Comments

We hear about police officers doing things they shouldn’t be doing quite often, but this is something I never thought I’d see. While getting arrested in general is embarrassing, this is a bit too much and people are quite outraged.

A photograph of two mounted police officers has recently surfaced online with one of them holding a rope with a man attached to it who is being arrested and clearly in handcuffs. This photograph has been met with a lot of controversies and many shared the photograph and urged those willing to call that specific department in regards. This incident occurred in Galveston Texas and just days ago thanks to the backlash received the police chief has made an apology.

What you did here to this man, Donald Neely, is horrible and unacceptable.

I would say “We need answers,” but nothing you can say would ever justify what you did to this man. Nothing at all. pic.twitter.com/OdVeqrFDcv

The man being led by rope’s name is Donald Neely who had been arrested on a charge of criminal trespassing and his having to walk in such a manner was not only unnecessary but also quite frustrating considering the symbolism that can be taken from it. It is truly fascinating how quickly things spark online and the awareness that can be brought through it.

We have verified with law enforcement officials in Galveston, that the photograph taken in Galveston is real. It is hard to understand why these officers felt this young man required a leash, as he was handcuffed and walking between two mounted officers. pic.twitter.com/bEFZnn4qmH

NY Times reported as follows on the apology that was released in regards:

“First and foremost, I must apologize to Mr. Neely for this unnecessary embarrassment,” Vernon L. Hale III, the city’s police chief, said in a statement posted on the department’s Facebook page on Monday night. “Although this is a trained technique and best practice in some scenarios, I believe our officers showed poor judgment in this instance and could have waited for a transport unit at the location of the arrest.”

The Police Department identified the two officers as P. Brosch and A. Smith and said that the officers’ body cameras were activated at the time of the episode. The chief’s statement did not say if the officers faced disciplinary action. The officers could not immediately be reached for comment late Monday.

In an interview on Monday night, Leon Phillips, the president of the Galveston Coalition for Justice, called for the two officers to be fired.

“If it was a white man, he wouldn’t have been treated that way,” Mr. Phillips said. “I guarantee there’s nothing in their rules that you can put a leash on a guy while you ride down the street on a horse.”

According to many, there will soon be a town hall meeting in regards to this incident so that concerned community members will be able to speak on the topic. What do you think about all of this and how does it make you feel? Should these officers have done things this way or was this as uncalled for as it seems to be?