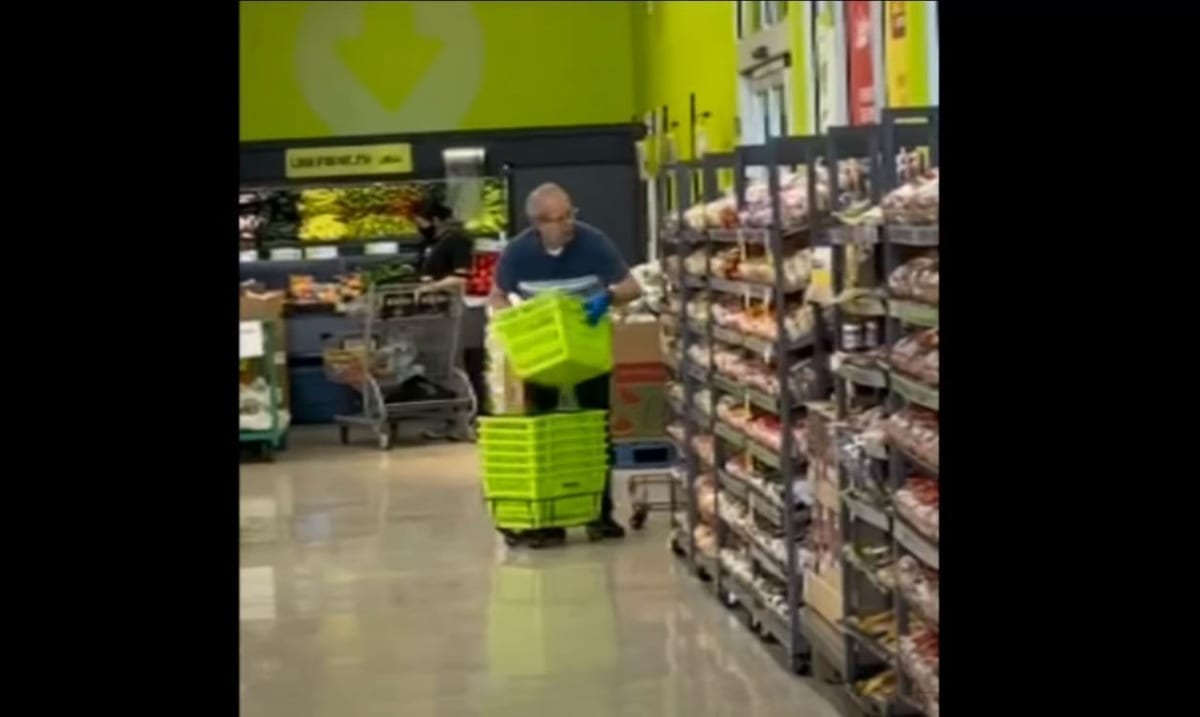 While we have heard about people doing some pretty horrible things throughout the years considering the pandemic we’ve been facing this whole ordeal has shocked many. In recent times a store worker was caught on camera ‘spit shining’ shopping baskets.

According to Toronto’s City News, a woman captured a video of a man who was working at a FreshCo location (on Bathhurst and Nassau) earlier this month (July) that was cleaning shopping baskets in a way that no worker ever should. In the video, he can be seen spitting on his gloved towel and then ‘cleaning’ the baskets off with that spit. While he is wearing gloves, the spit completely ruins that in all possible ways.

City News reported as follows on this topic and notes the woman who recorded it was so sickened she ended up leaving the store:

“I couldn’t believe that. I was in shock…I feel sick,” says Marta Casimiro, the customer who recorded the video. She adds that the cleaner continued on to wipe down grocery carts with the same towel as well.

Marta tells CityNews she first began recording because she noticed the baskets were very dirty when she entered the store. She intended to show the manager that the cleaner was not doing a good job of wiping them down when she coincidentally caught what she calls the “unacceptable” act on video.

A manager was unavailable on the day the incident occurred, so Marta says she called back the following morning and was subjected to “very bad customer service” from the franchise manager.

“The [manager] protects his worker. He said he didn’t want to see the video. He didn’t believe me and he treated us very badly,” she says.

Marta said she contacted management at a higher level, but did not hear back for a few days. On Wednesday, her husband received a call saying the cleaner has been suspended.

But Marta feels her concerns were not taken seriously enough or acted upon urgently, given the seriousness of the issue and the ongoing COVID-19 pandemic.

“We cannot allow such things to be overlooked. I’m furious and very disappointed,” she says. “We are living in a pandemic…how do you think we feel? This is terrorism for me.”

From there City News also noted that they reached out to the parent company for FreshCo which happens to be Sobeys and that they were told that the cleaner in question was not technically working for FreshCo as he came from a ‘third-party service provider’ and has since been kicked from the store as a ‘worker.’ Someone they spoke to at Sobeys said that the things in this video were ‘reprehensible’ and that she especially now basically has nothing but the highest expectations for the safety and health of the customers as well as the workers during times like these. This video in itself has been going viral and with good reason. Workers regardless of their status cannot be doing things like this, period. It is disgusting and heartbreaking to see people completely disregard health standards and basically not care at all.

To see the video for yourself take a peek below. As you can see, this man definitely seems to be spitting and cleaning these baskets with the spit. Could you imagine seeing this in person? I would be completely livid.