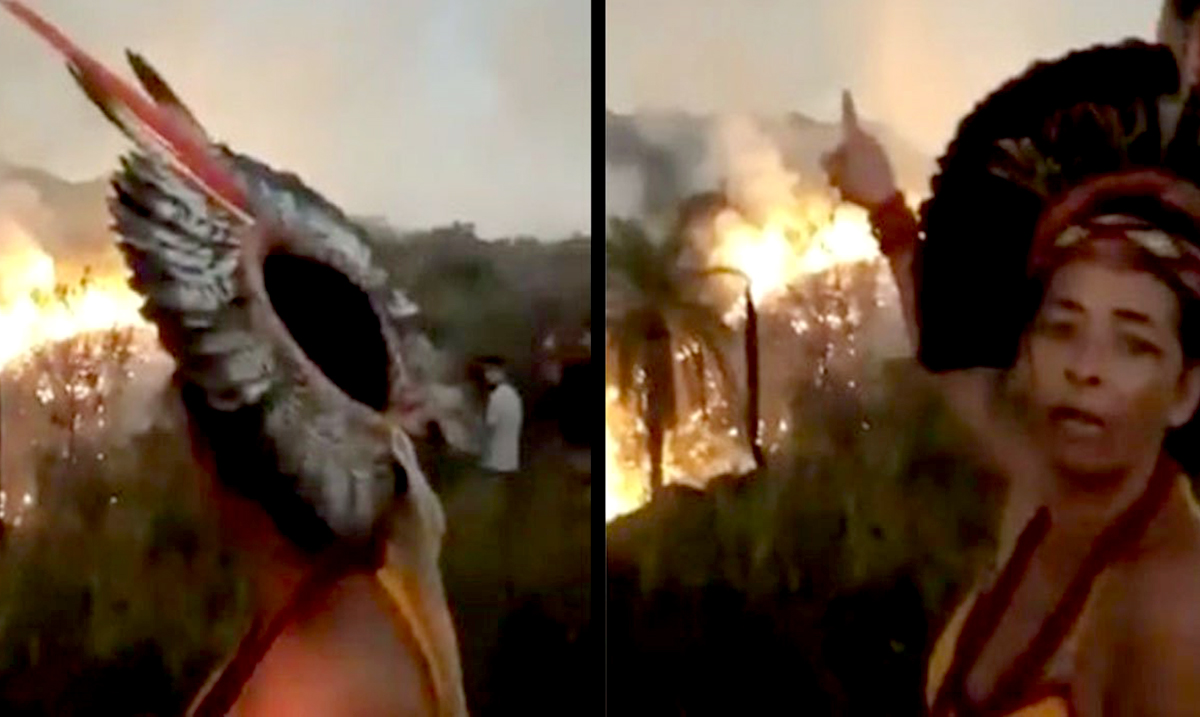 By Gerald SinclairAugust 25, 2019No Comments

We’ve seen photographs of the fires and the animals being harmed/killed as a result of them but what about the people being affected? For those who might not be aware, the rainforest is home to many indigenous people, and they are being forced to flee as well.

Recently a heart-breaking video has surfaced bringing awareness to this serious issue and the people being affected by it. While many have been concerned about the carbon monoxide radiating off the Amazon due to this fire, stopping to think about the people who are losing their homes and perhaps their lives in some cases is important. The video I am referring to was posted just days ago and shows a Pataxo woman who is frantic and talking in her language about how ‘assholes came in and burned down (our reservation) I want all of the media here to see this,” she standing before a fire and making her way out is losing everything in that moment.

Pataxó woman:
“These assholes came in and burned down [our reservation]… I want all of the media here to see this” pic.twitter.com/uGFp7RItHK

Many sources seem to back up what she is saying as it does seem these fires are being set intentionally. These fires seem to be stemming from the farmers/cattle ranchers in the area who are seeking more area for their animals to graze. Fire in the dry season is the best means of clearing the Amazon forest and one of the worst things that can happen to the area. These cattle ranchers are said to have become much bolder as president Jair Bolsonaro’s mindset and political thoughts, in general, seem to be quite pro-industry.

According to NY Times as follows can be said about Bolsonaro:

While campaigning for president last year, Mr. Bolsonaro declared that Brazil’s vast protected lands were an obstacle to economic growth and promised to open them up to commercial exploitation.
Less than a year into his term, that is already happening.
Brazil’s part of the Amazon lost more than 1,330 square miles of forest cover in the first half of 2019, a 39 percent increase over the same period last year, according to the government agency that tracks deforestation.

The Amazon is often referred to as Earth’s “lungs,” because its vast forests release oxygen and store carbon dioxide, a heat-trapping gas that is a major cause of global warming. If enough rain forest is lost and can’t be restored, the area will become savanna, which doesn’t store as much carbon, meaning a reduction in the planet’s “lung capacity.”

Just a gentle reminder that the fires in the amazon are intentional. It’s not a forest fire type situation. It’s an intentional setting ablaze of the forest by the fascist brazilian govt + agrobusiness & ranching oligarchs. Wording matters. Don’t hide who is doing this & why.

With more and more people speaking out it seems steps are in the works as far as getting these fires under control goes but who knows how long these efforts will take? To learn more on this topic please feel free to check out the video below. Do not forget the face of the woman seen above, hers is one of many who need our help more now than ever.