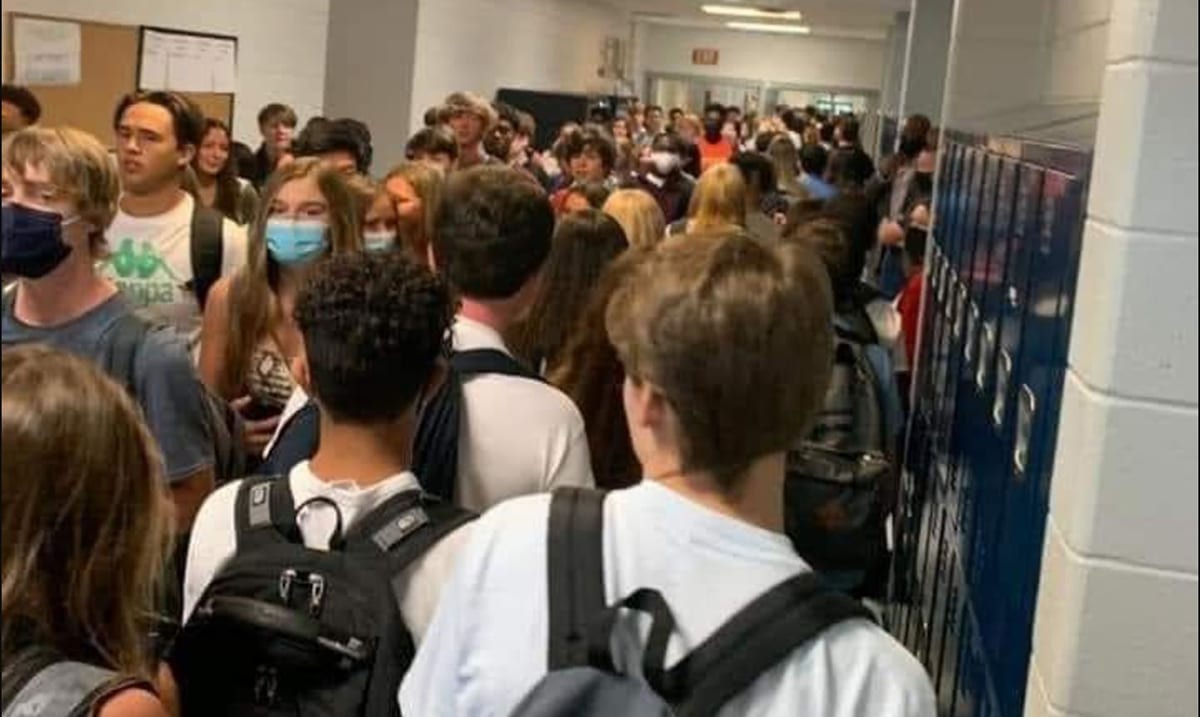 In recent times some schools have opened back up and received lots of backlash for doing so. One of those schools was/is North Paulding High School in Georgia.

This high school while trying their best to do things as ‘safely’ as possible has been getting a lot of backlash as photos online seem to show just how unsafe things are. As you can see in the Tweet below, the halls are crowded and most kids don’t appear to be wearing masks. It does not look like social distancing is possible with the halls so crowded and two students who have posted about this online claim they have been suspended over it according to Buzzfeed News.

This is the first day of school in Paulding County, Georgia. pic.twitter.com/fzdidaAABM

One of those teens actually spoke with Buzzfeed about all of this and her name is Hannah Watters (15 years old). She told Buzzfeed that she got a 5-day suspension for posting one photo and one video on Twitter of the conditions she was stuck in. According to those from the school she had violated the student code of conduct by posting.

Buzzfeed also noted that the school told the students over the intercom later that same week that any students found ‘criticizing the school on social media could face discipline.’ That being said, photographs like these are important for us to see just what is going on. We are after all facing a pandemic that needs to be handled carefully. All of this having been said after news of this suspension went viral and news of another person’s suspension from the same school also was brought to light Watters suspension was revoked.

A high school in the Atlanta suburbs has lifted the suspension of at least one student who shared images of a crowded campus hallway jammed with mostly maskless classmates, according to the student and her mother.

“The principal just said that they were very sorry for any negative attention that this has brought upon her, and that in the future they would like for her to come to the administration with any safety concerns she has,” Watters said in a text message. “[The principal] confirmed that she will have no disciplinary action on her record and she can return to school on Monday.”

Hannah Watters, 15, was one of at least two North Paulding students who were suspended earlier in the week after they shared photos and video of the school’s crowded interior on the first days of school.

It’s unclear if the other student had his suspension removed.

The school in Dallas, Ga., about an hour’s drive from Atlanta, was thrust into the national spotlight because of the images, which showed a sea of teens clustered together without face coverings, and raised concerns among parents and others over how the district is handling school reopenings during the coronavirus pandemic.

Facing a fierce online backlash, Otott told parents and guardians in a letter earlier in the week that the images “didn’t look good.” But he argued that they lacked context about the 2,000-plus student school, where masks are a “personal choice.”

This is what it looks like even with split dismissal. pic.twitter.com/erCA2lhOUb

To be 100% clear, I can go back to school on Monday. I couldn’t have done this without all the support, thank you.

While we do not yet know what will come of all of this we do know that if one school is appearing so ‘unsafe’ others likely are as well. I am sure photos like this will go viral in regard to other schools as well in the coming months as more and more open back up. That having been said, what is there that can be done?