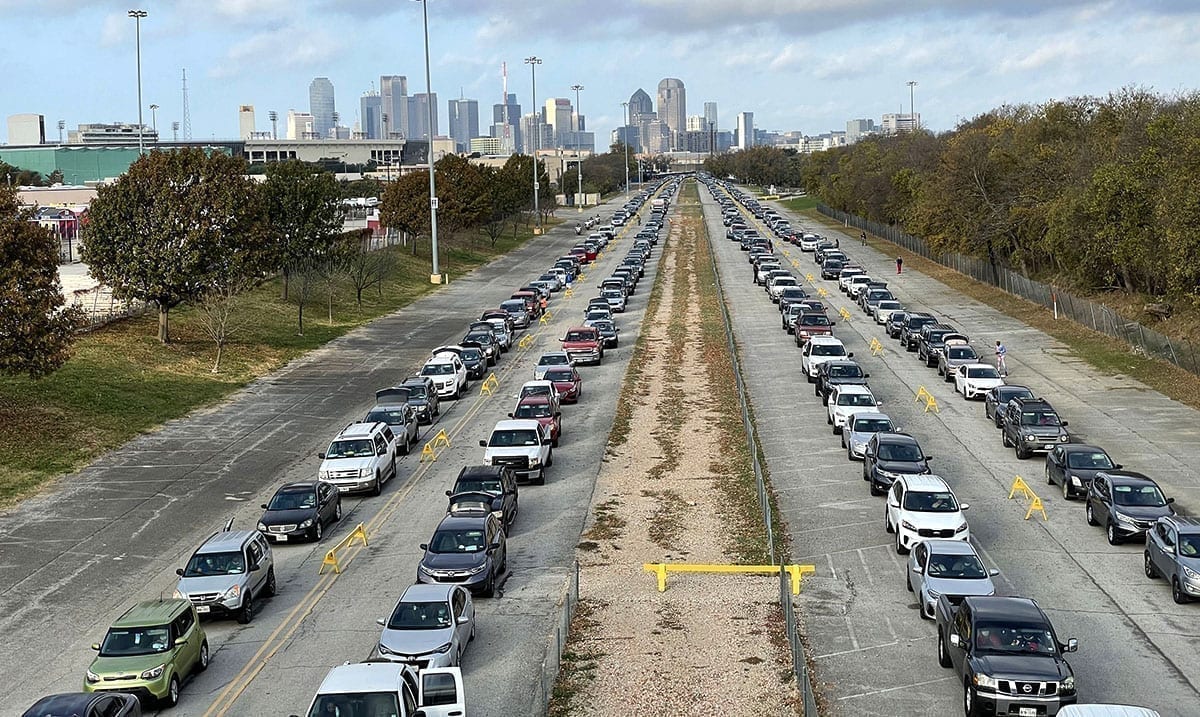 Thousands Of Cars Line Up To Collect From Texas Food Bank

While we all know 2020 has been rough a lot of people do not realize how intense the issues we’re facing are. With so many out of work and CVD-19 still running rampant, it seems there are more needing food now than ever.

With Thanksgiving just around the corner, thousands of people have lined up in their cars just this past weekend to get food from the North Texas Food Bank. According to CBS, the Food Bank told them that this was easily their largest-ever food giveaway to date and perhaps might not be their last as people are still in need. This event in Dallas, Texas was huge and gave food to around 25,000 people.

CNN wrote as follows on this food distribution event:

North Texas Food Bank (NTFB) distributed more than 600,000 pounds of food for about 25,000 people on Saturday, according to spokeswoman Anna Kurian. There were 7,280 turkeys distributed to families, Kurian told CNN.

Photos provided by NTFB show thousands of cars lined up for NTFB’s Drive-Thru Mobile Pantry at Fair Park. Kurian said the need for food “has certainly increased” with the pandemic, with Texas last week becoming the first US state to report 1 million cases of coronavirus.

“Forty percent of the folks coming through our partners doors are doing so for the first time,” she said.

“I see blessings coming to us cause we all struggling. And I appreciate North Texas helping us out,” Dallas resident Samantha Woods told CNN affiliate KTVT as she waited in her vehicle.

CNN also noted that some of the people coming to get food had been out of work since December and are struggling to find work with their unemployment benefits now running dry. This all as we still wait for more COVID relief funds to be pushed through and checks to eventually be sent out once things are said and done. As we move through the last bit of 2020, things do not seem to be getting much better although places are opening back up all over the US.

CBS News wrote as follows breaking down some things about this event:

The event was the “brainchild” of the CEO of MW Logistics, Mitchell Ward, who asked the NTFB if they could “come together to help feed folks in south Dallas,” Kurian said. She also emphasized the food bank had “a lot of community support.”

From March through September, the organization distributed over 63 million meals, a 45% increase compared to 2019, according to its website. It provided more than 60 million pounds of food within that time, marking a 72% increase from last year during the same period.

Kurian said the food bank has seen an increase in need throughout every agency in its feeding network since the start of the pandemic, with at least 40% of the people “coming through the doors” being “new to them and due to COVID.”

“As long as jobs are unstable, we will continue to see an increased need,” Kurian said. “The good news is that there is a caring community that wants to ensure that we can help our neighbors.”

And the dramatic increase in people experiencing food insecurity amid the pandemic isn’t limited to Texas — it’s nationwide.

To learn more about all of this take a look at the video below. While it might not sound like much to those with full bellies, this is a very real problem all across the US. We as human beings should be doing our best to help one another out and things may end up getting worse before they get better.