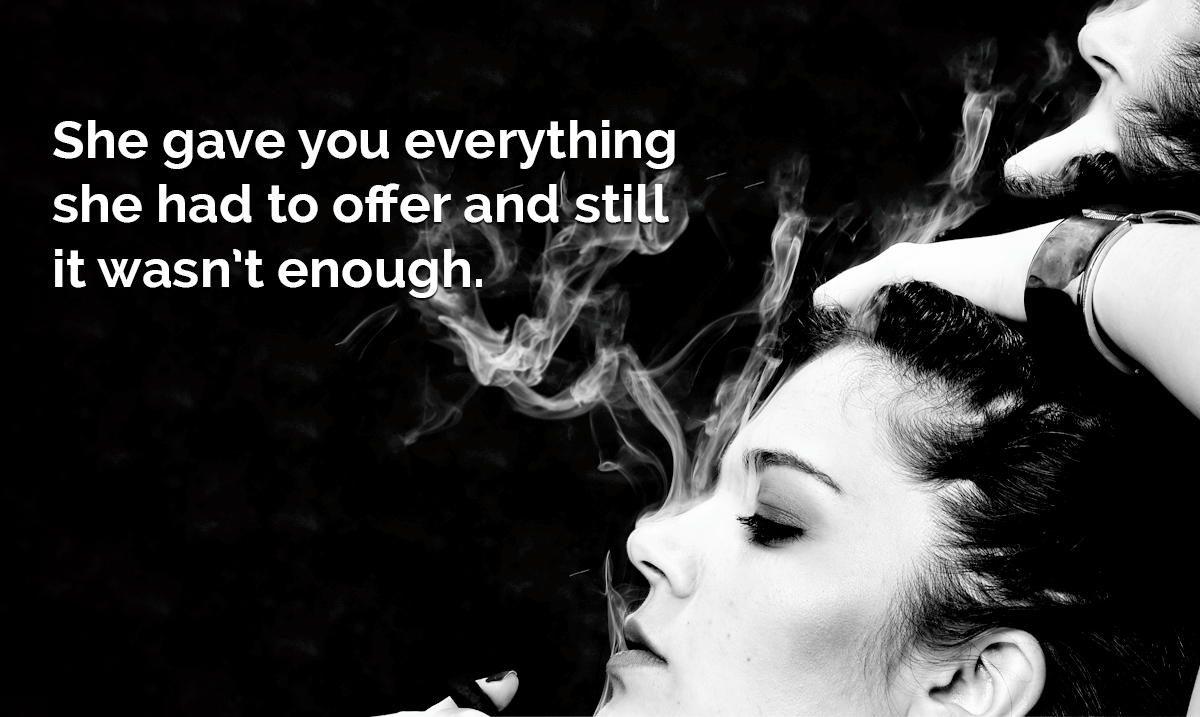 This Is Who She Became After You Broke Her

By Gerald SinclairJanuary 11, 2020No Comments

While you don’t see the damage you did because you’re not around anymore that doesn’t mean it isn’t present. You broke her in every possible way and all she wanted to do was love you.

She gave you everything she had to offer and it wasn’t enough. You left her feeling as if she didn’t even matter, to begin with, and honestly, she probably didn’t. You didn’t deserve her to begin with but I doubt you can see that. She was the best you’ll ever have and someday you will realize that and it will be far too late for you to turn back time.

You should have treated her better. You should have made her feel like the amazing woman that she is and you should have proved to her that she was worth it all. Instead, you beat her down time and time again. You wore away at her self-esteem and for a while there she didn’t know who she was anymore. I hope you’re happy with yourself, and I hope that someone comes into your life and makes you feel as in love as you did her and I hope that they break you in the ways you broke her.

She didn’t deserve the treatment you gave her. Who builds someone up so high just to stand by and watch as they fall? Well, I guess you do. You’re that kind of person because that’s exactly what you did. However, after having some time to really get back to normal and find herself, she is stronger for having experienced you.

Now she knows what she will never tolerate again, and she knows that you were not worth the time and efforts she put into you. She is able to hold her own better now than she ever has, and she will never be in that position again. She has moved on and found someone who will treat her the way she deserves to be treated, someone who will actually be there for her when life brings her down. Someone who will hold her hand when she’s struggling instead of leaving her crying alone in the dark.

She became someone after you broke her, someone similar to who she was but all the more powerful. She learned that in this world you have to demand respect otherwise you’ll never get it, and she learned that some people will never change.

She never did anything to deserve the things you did to her and while she knows that now it was something she struggled with for a long period. She doesn’t wish you any ill will but I do. She might not regret having known you but I wish I had met her long before you did so that the pain you brought into her life would have never occurred.

She might have thought you were offering her the world but sadly you were not capable of that at all. You broke promises, manipulated your way into control, and made sure that you were the one she had to go to when things were happening in her life and you did not deserve that kind of presence in her life.

She has changed in so many ways and the light inside her will never be the same but maybe that’s for the better. She is always working to share her story with others and making those who haven’t faced that kind of thing aware that they never have to. Sure, she has some scars that resonate deeply with the time she spent with you but that’s all you are now.

You’re nothing and she is healed, She is no longer suffering, and she has made it through some of the worst points in her life. She might be more guarded, less quick to trust, and a bit harder to get to know now, but she is able to be the best version of herself and that is something she accomplished without you looming over her shoulder.