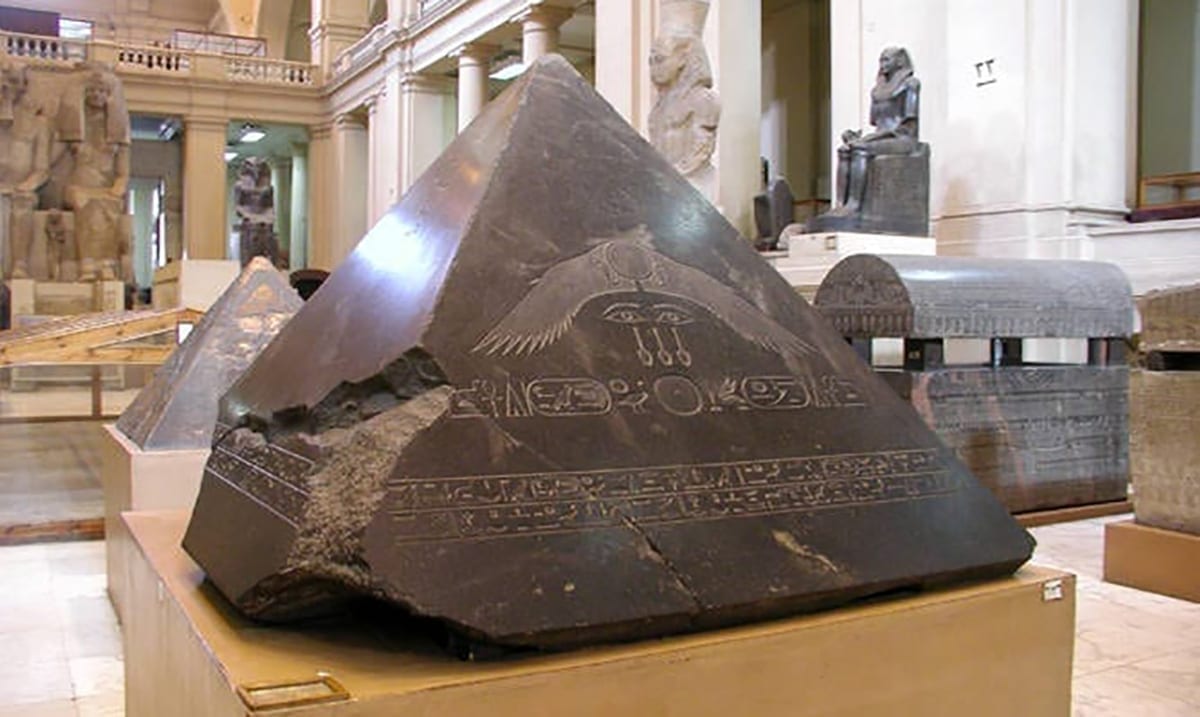 For those who do not know there is a ‘pyramid’ in Egypt known as The Black Pyramid and this pyramid is not quite like the rest. It is in a very poor state and was built by Amenemhat III.

Because it is missing casing blocks and colored by mudbrick it garnered the name ‘The Black Pyramid.’ This interesting pyramid was according to Ancient Egypt Online one that was not made very well. It was constructed on unstable ground making it too unstable and it was close to the edge of the Nile which ended up leaving it flooded after finally constructed in the end. Its core was quite weak and well, it didn’t have much support overall as it should have.

That all having been said, this pyramid is still quite a sight to see and is truly marvelous in many ways. No, it doesn’t look like much now but in its prime, it was likely quite amazing. Something very interesting about this pyramid is that its pyramidion was still intact for the most part when it was discovered. For those who do not know a pyramidion is the uppermost capstone of an Egyptian pyramid. It is in the Egyptian language known as the Benben stone.

Travel2Egypt wrote as follows on The Black Pyramid itself:

At Dahshur, there are three pyramids of the Middle Kingdom. The Bent Pyramid of Snefru was one of them. Roughly 2 kilometers east of this pyramid, there is another pyramid from the Middle Kingdom called the Black Pyramid. This is a monument that was built to honor King Amenemhet III. It is called “Black” because the structure contains dark ruins which come out of the sand. There is no pointy top to the pyramid, but rather a rocky outcrop. It certainly doesn’t look like your typical pyramid.

The core of the Black Pyramid is made of dark mudbrick. What’s missing here is the stone framework that other pyramids have which is supposed to stabilize the structure. But the unusual shape of the Black Pyramid was likely not intentional. Most historians believe that robbers and bad weather did a lot of damage to the structure over the many centuries since it was built.

After Senwosret III passed away, his son named Amenemhet III succeeded him. Amenemhet III is considered to be the final great leader of the Twelfth Dynasty

During the late 19th century, Perring and Lepsius went to the Black Pyramid for the first time. Between 1894 and 1895, Georges Legrain and Jacques de Morgan also went there for the first time too. In 1900, the Egyptian Antiquities Organisation inspected the pyramid site and discovered a gorgeous dark basalt pyramidion. Investigators revealed this artifact on the pyramid’s eastern side. Each side of the pyramidion was ornamented with beautiful inscriptions in hieroglyphics. The pyramidion has since been taken to the Cairo Museum for public viewing.

No one knows if the top of the Black Pyramid ever had the pyramidion on it. Most people don’t think so because the pyramidion is in such great condition. It would not have been preserved so well if it were on the pyramid.

Experts do have crucial questions about this small pyramid because its inscriptions don’t seem to have the God Amun mentioned anywhere. The name of this god was likely eliminated from the inscriptions later during Akhenaten’s rule over Egypt. Since 1976, Deiter Arnold has directed the German Archaeological Institute located in Cairo. The institute has re-investigated the Black Pyramid numerous times over the years to come to these conclusions.

A lot of complicated planning went into the Black Pyramid’s substructure. It was made differently from other structures during the Twelfth Dynasty because corridors were created to connect the two entrances together. The easterly entrance features a descending staircase that takes you to numerous passages and chambers.

Now, as you can see below, this pyramidion made of grey granite is truly quite intact. It is very much at home at the museum in Cairo and will likely remain there for well, forever. While some of the inscriptions have been defaced, it is thought to have never truly been used as noted above which is why it is in such good condition. Had it been at the top of the pyramid, it would not have been anywhere near as preserved. It is possible that it became dislodged during the rule of Akhenaten and from there was never placed back in its rightful home. 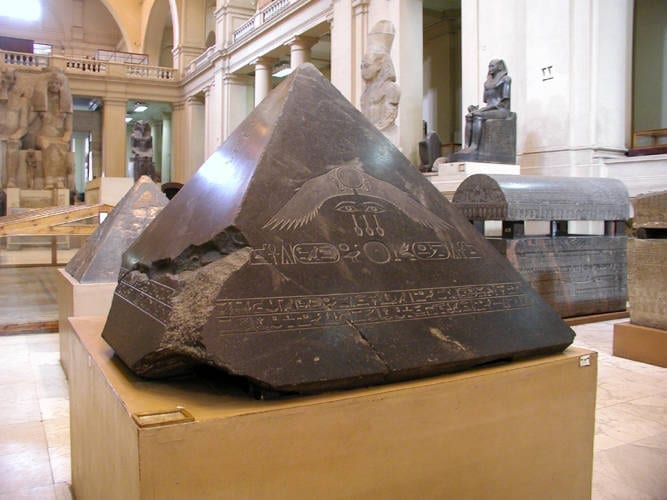 To learn more about this marvelous piece take a look at the video below. Isn’t it amazing? I for one would love to see it in person.