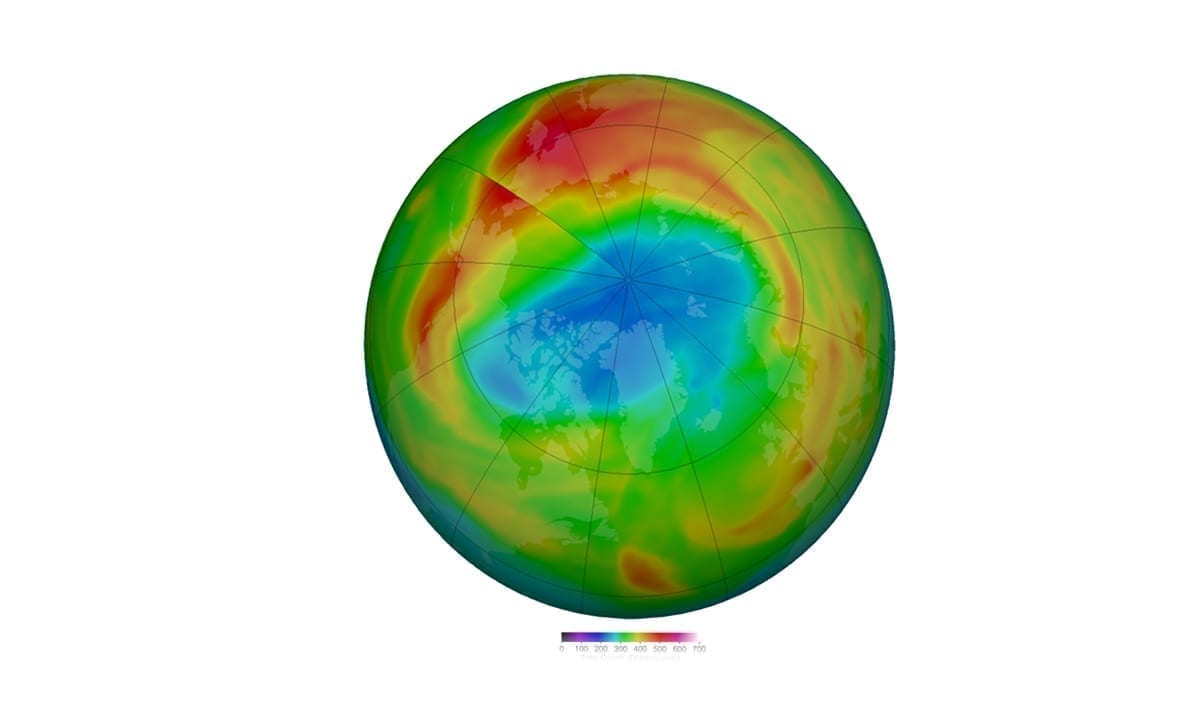 This Could Be The Largest Ever Hole In The Ozone Layer

By Gerald Sinclair April 5, 2020 No Comments

For those who do not know NASA has an ‘Arctic Ozone Watch’ that keeps up with the ozone layer in these colder regions. This important to be aware of as that watch has reported the formation of a very big hole in the ozone layer above the North Pole.

While more research is needed and the situation is still being looked over, there appears to be a hole in the ozone layer around the North Pole that could be the biggest on record in the North. While we’ve had previous reductions in this area, this one could easily be the largest we’ve seen here. This hole in itself is quite puzzling and is raising a lot of questions.

According to Smithsonian Magazine, this new wound further diminishes the Earth’s protective shield in a big way. While the fissure in the ozone layer at the South Pole has seemingly disappeared, this one as of March has opened up. While we do not know much about it just yet, this hole is not likely going to last very long even though it is quite large.

In regard to this hole Nature published as follows on March 27th:

A vast ozone hole — probably the biggest on record in the north — has opened in the skies above the Arctic. It rivals the better-known Antarctic ozone hole that forms in the Southern Hemisphere each year.

Record-low ozone levels currently stretch across much of the central Arctic, covering an area about three times the size of Greenland (see ‘Arctic opening’). The hole doesn’t threaten people’s health, and will probably break apart in the coming weeks. But it is an extraordinary atmospheric phenomenon that will go down in the record books.

“From my point of view, this is the first time you can speak about a real ozone hole in the Arctic,” says Martin Dameris, an atmospheric scientist at the German Aerospace Center in Oberpfaffenhofen.

Ozone normally forms a protective blanket in the stratosphere, about 10 to 50 kilometres above the ground, where it shields life from solar ultraviolet radiation. But each year in the Antarctic winter, frigid temperatures allow high-altitude clouds to coalesce above the South Pole. Chemicals, including chlorine and bromine, which come from refrigerants and other industrial sources, trigger reactions on the surfaces of those clouds that chew away at the ozone layer.

The Antarctic ozone hole forms every year because winter temperatures in the area routinely plummet, allowing the high-altitude clouds to form. These conditions are much rarer in the Arctic, which has more variable temperatures and isn’t usually primed for ozone depletion, says Jens-Uwe Grooß, an atmospheric scientist at the Juelich Research Centre in Germany.

But this year, powerful westerly winds flowed around the North Pole and trapped cold air within a ‘polar vortex’. There was more cold air above the Arctic than in any winter recorded since 1979, says Markus Rex, an atmospheric scientist at the Alfred Wegener Institute in Potsdam, Germany. In the chilly temperatures, the high-altitude clouds formed, and the ozone-destroying reactions began.

While this hole in itself won’t be much danger to us at all, it is important to be aware of and to research so that in the future we can be more informed. That being said, scientists seem quite anxious to see how things play out according to SM. I guess only time will tell how quickly this hole goes away or if something unexpected happens between now and the time it’s gone.