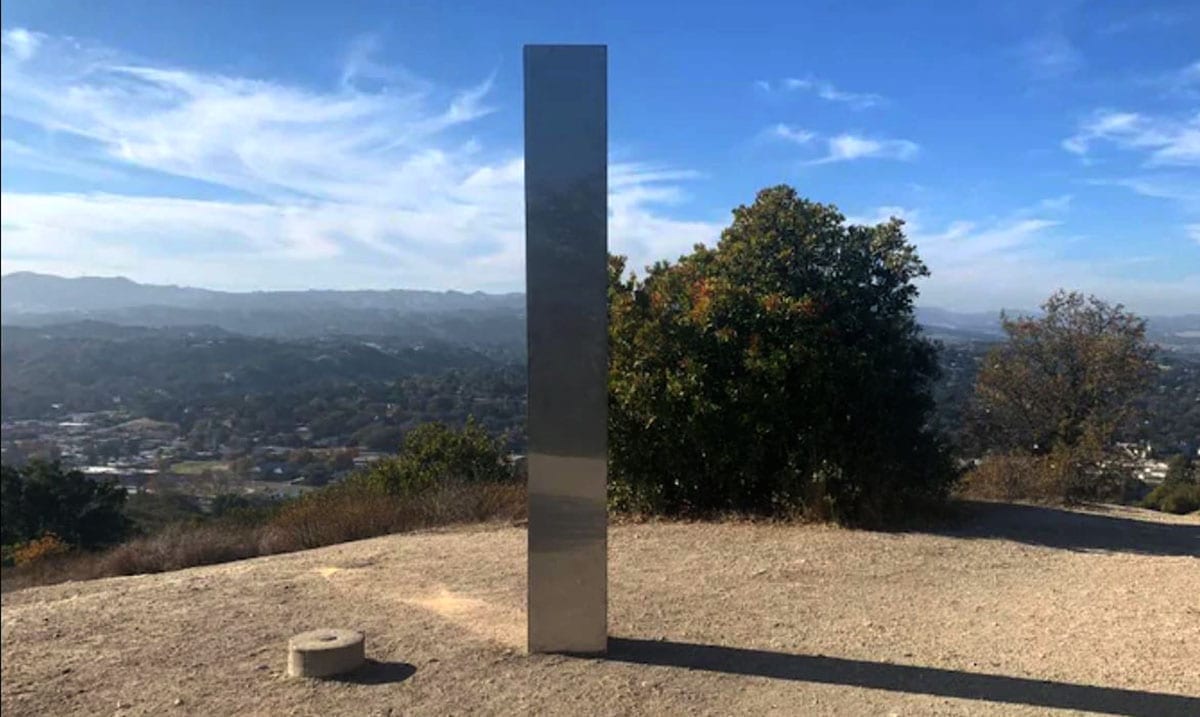 By Gerald Sinclair December 4, 2020 No Comments

Once the mysterious monolith in Romania disappeared shortly after the one found in Utah did, we were not really expecting another to pop up but alas, another has. It seems the third metal monolith as of late to be found is in California.

While we do not know if the three appearing and disappearing monoliths are linked, it seems they have to be, right? They are coming about right after another has gone and everything seems too synched up to be a coincidence, doesn’t it? I for one think that they are somehow being placed and removed by people in contact with one another.

According to Yahoo!News photos were posted on social media of the recent monolith that is eerily similar to the other two not long after the one in Romania disappeared. It was found by hikers who and is somewhere on top of the Pine Mountain Trail in what is known as Atascadero Park. That for those who do not know means it’s near both San Francisco and Los Angeles. I know, these monoliths might not sound like much but the mystery behind them has many quite intrigued.

All of that having been said, this recent one has already come down as it was destroyed by vandals. According to KEYT a video was streamed of several young men who had traveled from ‘Orange County to San Luis Obispo County and destroyed the metal object, replacing it with a makeshift wooden cross.’ That being said, the cross did not last long as it also is nowhere to be found. While tearing down the monolith they were chanting things like ‘Christ is King’ and ‘America First.’ I can only assume they are thinking that something to do with these monoliths is ‘unholy,’ perhaps?

Vice wrote as follows on the destruction of this interesting piece of work:

In the video, a group of three men are seen pushing the statue over and chanting “America First” and “Christ is King.” The men, one of whom was wearing a “Make America Great Again” headband, called part of the monolith’s construction “gay” then replaced it monolith with a wooden cross. It is a decidedly bleak turn in the ongoing monolith saga that has generally been a delightful distraction for a world wracked by a pandemic.

“Christ is king in this country. We don’t want illegal aliens from Mexico or outer space,” a man in the video says. “So let’s tear this bitch down.”

As the group of three struggle to topple the 200-pound statue, they can be heard chanting as they sway it back and forth. Eventually, the monolith’s base breaks and it falls to the ground.

The group then places a wooden cross near the site of the monolith. They go on to pose and take pictures with the two pieces of plywood, all stepping with one boot on the monolith as if it’s a hunting trophy. After the photoshoot, they tie ropes around the monolith and drag it down the mountain, calling it names and cheering.

“It was a learning experience. Nobody got arrested … It was fine because it was funny,” a man says on the stream after the monolith was taken down.

The California monolith was discovered Wednesday morning atop Pine Mountain in Atascadero by a group of hikers. It is the third silver monolith to be found in the past weeks—the first in Utah’s red rock country and then shortly after, another was found on a hill in the Romanian town of Piatra Neamţ.

I for one think it’s quite sad this one came down early because of vandals but at the end of the day, things cannot be undone. Do you think another will pop up elsewhere and if so, where? I for one am waiting to see.