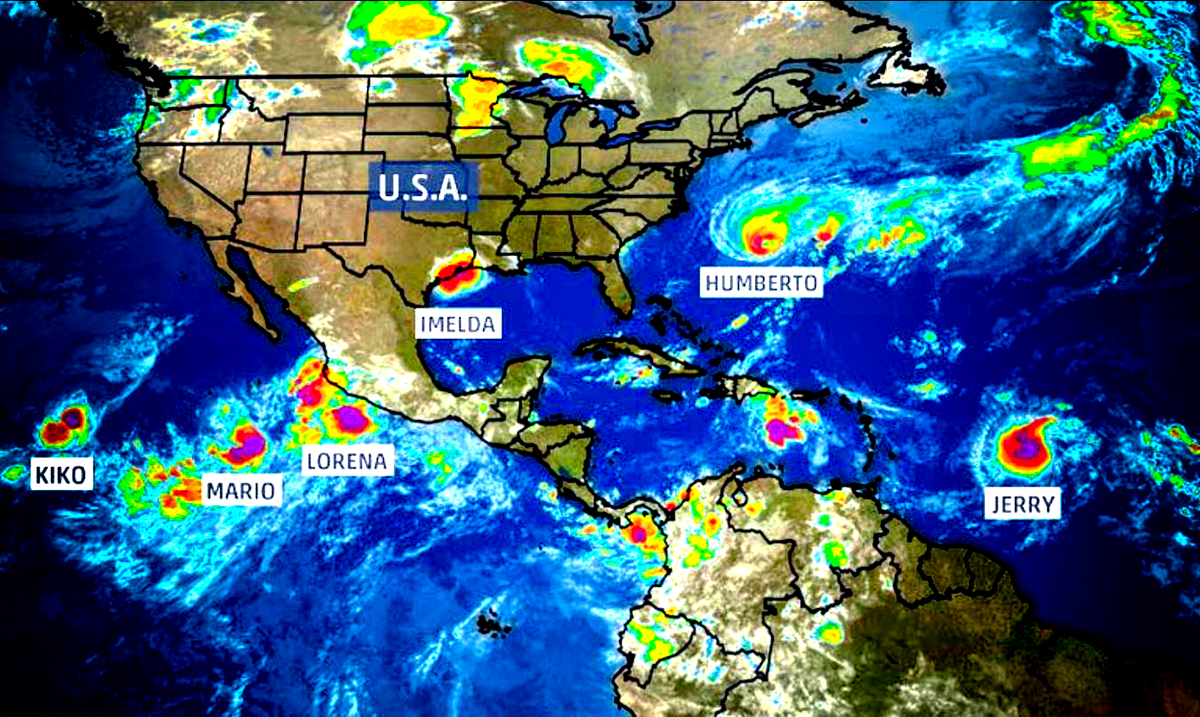 There Are Currently 6 Storms Spinning Across The Atlantic And Pacific

Just days ago we reported that hurricane activity, in general, had been not too long ago predicted this year for being much worse than usual and now we are seeing that reality full swing. While not all of these are Hurricanes just yet, they are serious storms and could be devastating for many depending on how things play out.

The six storms we are facing right now are breaking records as we have never seen this number at one time reach a point that allowed them all to be named. These storms are currently known as Humberto, Kiko, Imelda, Jerry, Mario, and Lorena. Chances are you’ve heard of the issues happening in Texas right now at the hands of one of these storms but things are much worse than you might assume, those experiencing these monsters first hand can attest to that.

The Weather Channel reported as follows regarding these storms:

After checking with colleagues, veteran National Hurricane Center forecaster Eric Blake tweeted that this combined number of active storms in both basins was believed to tie a modern record from September 1992.

“They are forming like roaches out there,” Blake tweeted Tuesday afternoon.

While we all know September is usually a peak month this is extreme even for September. It should also be noted that this was/is the first time we’ve had three named storms with winds of at least 60 MPH in the Eastern Pacific Basin in five years according to Phil Klotzbach from the NHC. Humberto is a major Atlantic hurricane and currently moving towards Bermuda as a Category 3.

For my followers not quite up on their MJO (honestly who has the time), the plot below shows a robust signal that the atmosphere will favor Atlantic storminess over the next 2 weeks. It by no means suggests any land threat, but does suggest overall activity won’t be waning soon. https://t.co/HdsyskR86K

Imelda the storm that Texas is facing right now was before recent times just a mere tropical storm in the Gulf of Mexico. Right now it is a Tropical Depression and Houston areas are all underwater because of it. Just take a look at the footage below ABC 13 shared of the flooding. Could you imagine being caught in all of that? We can only hope everyone who did get caught in it is safe now and that everyone in the area remains safe.

Now, at the moment all of the other storms mentioned are just that, tropical storms but that doesn’t mean they might not grow into something much worse. Jerry is expected to become a hurricane soon and Kiko could be working towards the same. This is a very scary thing to see and all of those in the paths of these storms are in our thoughts. For more on this topic please feel free to check out the video below, do your best to be as informed as possible.