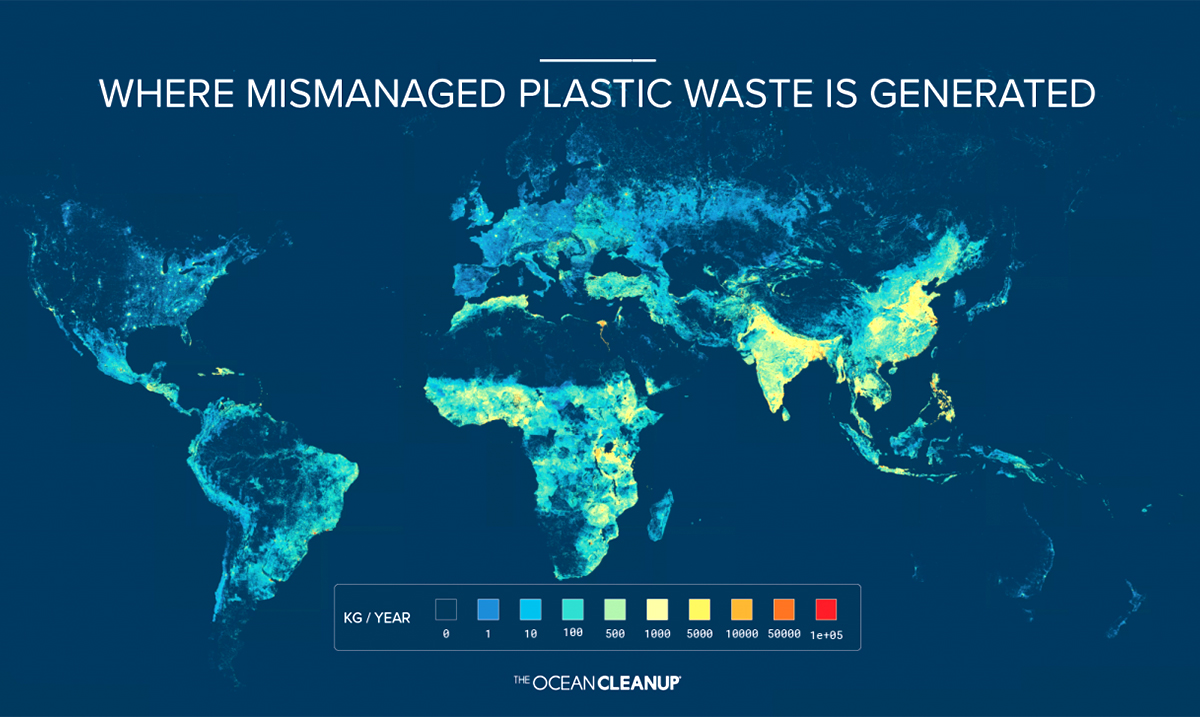 This past Saturday, a massive $20 million dollar system designed to clean up the world’s oceans was just deployed. Designed to clean up over 1.8 trillion pieces of trash that are floating around in the Great Pacific Garbage Patch, the system was designed by the non-profit organization known as Ocean Cleanup.

The organization was founded in 2013 by 18-year-old Dutch inventor Boyan Slat, with a mission to develop ‘advanced technologies to ride the world’s oceans of plastic.’ His device, a massive boom that is comprised of dozens of smaller booms can trap 150,000 pounds of plastic each year when they begin between Calfornia and Hawaii.

The Great Pacific Garbage Patch he plans to destroy is the largest in the world, and it is twice the size of Texas and contains roughly 80,000 tons of plastic and other debris. To put that into perspective, it’s helpful to imaging 500 jumbo jets, which would equal the weight of the trash. According to researchers, when the two ocean currents meet, it creates a vortex, which prevents the trash from moving out of where it is stuck.

Due to its size, satellite images can actually monitor the patch.

While the boom system was deployed this past weekend, it will be placed closer to the garbage patch around mid-October and it will begin collecting trash. Shaped like a U, it will collect trash until it is met with a vessel that will then empty the machine and take it to land for sorting.

And the net, which captures the trash is just low enough to get the debris, without harming any sea creatures. And the project has the backing of some very big people including Peter Thiel (the founder of Paypal). As the project continues, more testing is in the works, and if the project is a success, we may see more and more systems placed into the ocean to collect trash and debris.

While this ocean cleanup began taking action back in 2018 (but was in the works for years before then), now that some time has passed perhaps taking a look at what changes have happened is important. There has been a lot of progress made and that progress is well worth noting. According to The Ocean Cleanup’s official website on October 2nd of 2019, they announced that System 001/B was successfully managing to capture and collect debris of plastic in the Great Pacific Garbage Patch.

Now, for those who do not know the Great Pacific Garbage Patch is the largest of our five offshore plastic accumulation zones. It is located somewhere between Hawaii and California and has been something many for years now were and still are quite concerned about. It is estimated that at least 1.15 million tons of plastic are entering the ocean each year from rivers and this plastic waste usually ends up at one of these ‘patches.’

In regards to this announcement The Ocean Cleanup reported as follows:

Despite the early success of System 001/B, there is still much work to do. With new learnings and experience derived from the successful deployment of System 001/B, The Ocean Cleanup will now begin to design its next ocean cleanup system, System 002; a full-scale cleanup system that is able to both endure and retain the collected plastic for long periods of time.

Once fully operational, The Ocean Cleanup will return plastic to land for recycling. The timing of that phase of the mission is contingent upon further testing and design iteration.

Now, from here even more progress has been made as just months later on December 12th of 2019, another update was made on their site noting that they were now able to complete mission one. This meaning that they have presented their first plastic catch on shore and will be making products from the waste they have found. This hugely furthering their cleanup operation.

They wrote as follows on the topic:

The Ocean Cleanup has, from the start, planned to create a value chain on the basis of their collected debris, with the aim of funding continued cleanup operations. Today, we announce the intention to develop attractive, sustainable products made from material collected in the Great Pacific Garbage Patch. The return to shore of the first plastic catch marks the beginning of this journey.

As this will be the first time it will be attempted to produce products fully made from plastic taken out of the ocean, the road ahead for the catch is likely going to be challenging. If all goes well, the organization expects to launch this premier product made from material collected in the Great Pacific Garbage Patch in September 2020. Details of the product, pricing, and quantity are also set to be announced at this time.

As we make our way through the beginning of 2020 it is quite apparent that The Ocean Cleanup is working to not only get plastic waste out of the ocean but also reduce the plastic waste going into the ocean initially. They will be tackling the 1,000 most polluting rivers in times to come and those rivers are responsible for around 80 percent of the plastic pollution we note in the oceans. This before the end of 2025 will according to The Ocean Cleanup see serious progress and success.

What do you think about all of this and do you think that this progress will make a real change? It does appear to be putting forth serious effort to make a difference and is a cause we should all be getting behind. To learn more please check out the videos below.