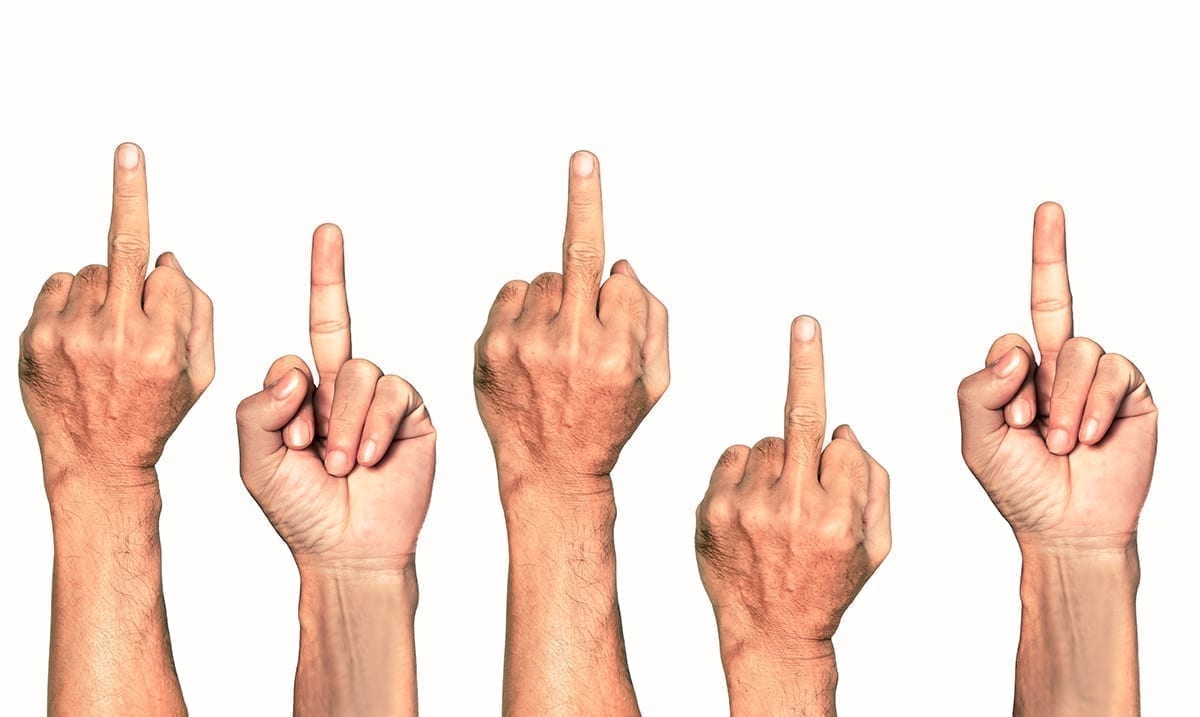 The Secret Meaning Of The Middle Finger – ‘Magic Gesture’

By Gerald SinclairAugust 1, 2020No Comments

While in this day and age we think of the middle finger as a way to tell someone to F-off, right? Well, while it has always had a somewhat negative meaning this gesture overall at one point meant something positive for those using it.

Back in ancient Greek times, the middle finger was seen as an apotropaic symbol. When it was used it was being used to ward off threats and help fight off dark magic. I know, that might sound a bit out there but it is quite true. Back in those times phallic symbols which the middle finger is one of were quite powerful and thought to be very protective.

In regard to phalli and its place in Ancient Greece encyclopedia.com wrote as follows:

Symbols and figures of male genitals also serve apotropaic functions, warding off evil and fending off aggression. In ancient Greece phalli were carved above doorways to protect homes, and phallic sculptures appeared throughout Greece. The island of Delos, reputed to be the birthplace of Apollo and Artemis, was famous for its statutes of phalli. Throughout the Mediterranean region both Greeks and Romans used phallic figures to protect valuable resources such as grain cisterns. The apotropaic qualities of the phallus derive from the ways in which it represents the idea of strength and manliness evoked to protect communities and their assets.

Ancient Japan looked to a group of gods called the Sahe no Kami, or preventive gods, to protect believers against beings from the underworld. The preventive gods were presented as giant phalli that were erected along highways, at the ends of bridges, and at crossroads to impede the passage of evil beings. The phalli became the protectors of travelers who would pray to them for safe passage and offer them rice and hemp. Recently the phalli were taken down to avoid offending Western travelers who associated them with obscenity. Though they are not consciously regarded as apotropaic, the city of Amsterdam is bedecked with thousands of roadside phalli that mark roads and protect pedestrians.

Perhaps the most frequently used contemporary apotropaic phallic symbol is the gesture popularly referred to as “the finger.” Although often used as a signal of anger, disdain, and even disgust, the finger and its many variations are also apotropaic, warding off threats, responding to aggression, and serving as a warning.

A more complicated version of the finger, the sign of the “horns,” is produced by extending the index finger and little finger. This is also an apotropaic figuration of the phallus, though in a less directly evident manner. The sign of the horn refers simultaneously to the prowess of a bull (fecund masculinity) and to the horns that signify that a man has been cuckolded (his wife has had sexual relations with another man). The display of the fingers as horns wards off cuckolding while celebrating masculine empowerment. More recently it came to signify the rock-on rebel spirit of bikers, rock fans, and extreme sports enthusiasts. Phallic versions of the horn also adorn the necks of young men who wear them to proclaim their virility and ward off evil.

Although contemporary apotropaic devices may be less obviously genital, they still exist and are used to protect wearers and citizens. Devices such as crystals, evil eyes, and rabbits’ feet combine luck with protection in ways that recall the genital origins of some of those devices.

The middle finger itself is thought of as the shaft while the fingers on either side are its testies. Yes, it in nature has a quite phallic past whether you’ve thought of it in that nature before or not. While most people might assume the middle finger was something created somewhat recently perhaps in the 60s or 70s, it has been around for far longer than that.

The BBC wrote as follows on this topic:

Ancient Greek philosophers, Latin poets hoping to sell copies of their works, soldiers, athletes and pop stars, schoolchildren, peevish policemen, and skittish network executives have all been aware of the gesture’s particular power to insult and inflame.

“It’s one of the most ancient insult gestures known,” says anthropologist Desmond Morris.

“The middle finger is the penis and the curled fingers on either side are the testicles. By doing it, you are offering someone a phallic gesture. It is saying, ‘this is a phallus’ that you’re offering to people, which is a very primeval display.”

While all of this might be a lot to take in, it is quite interesting to learn about. I for one am quite blown away by the things I never knew about the middle finger itself. Did you know any of this before reading the article before you?