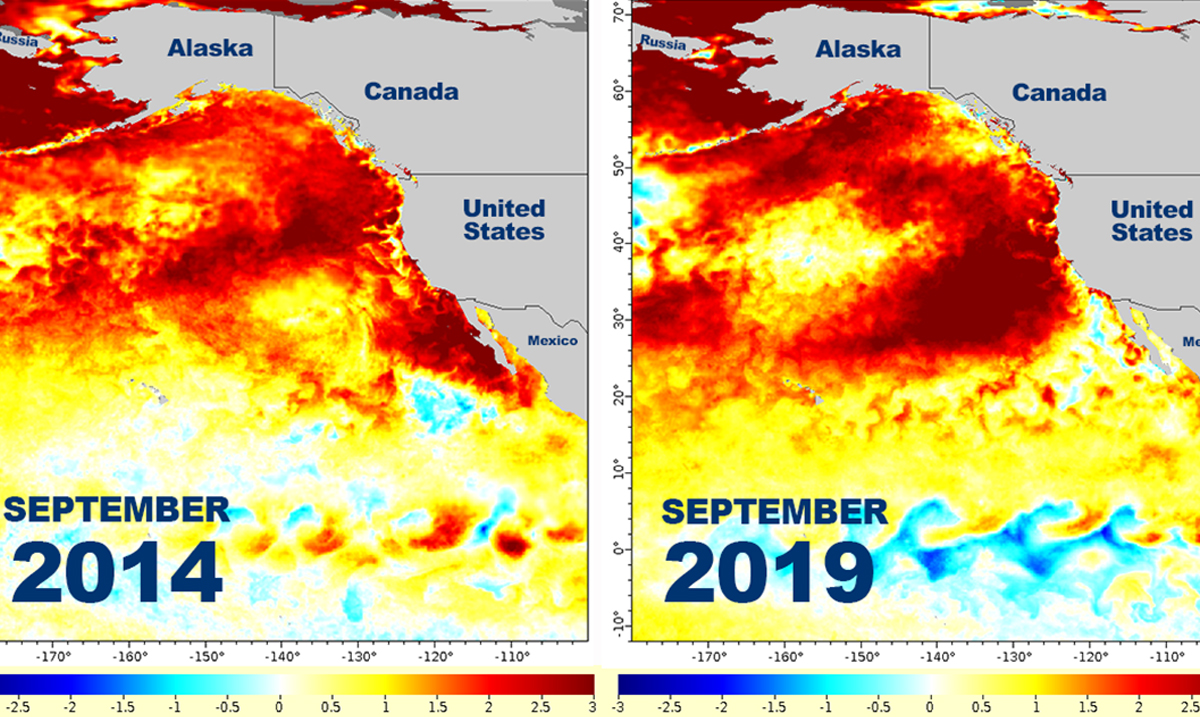 Chances are you heard not too long ago that there were tens of thousands of seabirds dying ‘randomly’ and washing up on shores in several places (most do not make their way to shore and so the numbers are likely much higher than expected). While back them we were not sure what caused their deaths, now it seems the reason has been revealed.

According to findings published in recent times within the journal Plos One, these birds died as a result of the blob. For those who do not know the blob itself is a mass of hot water in the Pacific Ocean. This hot water not only killed off the birds not because of the water burning them or anything like that but more-so because the temperature change caused the plankton species they were eating to die off leaving them with little to no food. From there these birds essentially starved to death.

These findings note as follows:

During the event year (May 2015 to April 2016) ~62,000 murre carcasses were reported from a vast range of coastline spanning more than 6,000 km (Table 1, Fig 2). Of these, ~40,000 were obtained from standardized surveys or rehab center reports. Impacts of the heatwave on murres appeared to be most extreme in the northern GOA and the southern CCS. Although few thick-billed murres (Uria lomvia) were detected on beach surveys overall (<0.1% of those identified on COASST surveys in Alaska and West Coast), they did comprise a higher proportion of total murres (n = 47) observed on Bering (15%) and Chukchi Sea (86%) beach surveys. Otherwise, the vast majority of murres observed on beaches in the GOA and CCS were common murres.

Encounter rates from southcentral California to the GOA were significantly elevated relative to baseline (Fig 3), and this trend was extreme in the GOA, with magnitudes 10x to 1,000x normal for 9 continuous months (Fig 3A). In the GOA month-averaged, encounter rates were the highest recorded (relative to monthly baselines: 2006–2014) from May 2015 through to March 2016 (except for June 2015), with the majority representing a statistically significant departure from baseline (Fig 3A). In addition, from September 2015 to January 2016 (except October 2015), month-averaged encounter rates were significantly higher than any previous year of data collection in the Gulf of Alaska (Fig 3A). Numbers counted in other parts of Alaska, including southeast Alaska, and the Bering and Chukchi Seas were not remarkable (Table 1, encounter rates not shown) but these are vast, scarcely populated areas and COASST sampling was limited. In the GOA, the elevated mortality signal was unusually prolonged, beginning in May 2015 coincident with the onset of breeding, and peaking at over 1,000x normal in December 2015 and January 2016, representing an average encounter rate of over 50 carcasses per km. By April 2016, encounter rates had dropped to 10x baseline.

These bird carcasses all seemed to have something in common. Their necropsies seemed to show they were emaciated and many were severely underweight if not emaciated. The fact that this mass die-off coincided with the most powerful marine heatwave we have on record was no coincidence, it was inevitable because of the conditions it created. It is also important to note these birds were not the only animals’ impacted sea lions, whales, and other animals also saw disaster in regards but not quite on the same scale.

As a result of this temperature increase and lack of food the breeding colonies of these birds in the region, they live faced reproductive issues for years after the event itself. According to CNN in 2015 three colonies didn’t produce one single chick and in 2016 there were 12 colonies struggling to produce offspring at all. While t seems overall this issue has evened back out within reason, things like this could happen again in the future, and we need to be aware of the impact ‘small’ things like this can have on the lives of different kinds of animals.

Washington University reported as follows on these findings:

From a review of fisheries studies conducted during the heatwave period, the research team concluded that persistent warm ocean temperatures associated with “the blob” increased the metabolism of cold-blooded organisms from zooplankton and small forage fish up through larger predatory fish like salmon and pollock. With predatory fish eating more than usual, the demand for food at the top of the food chain was unsustainable. As a result, the once-plentiful schools of forage fish that murres rely on became harder to find.

“Food demands of large commercial groundfish like cod, pollock, halibut, and hake were predicted to increase dramatically with the level of warming observed with the blob, and since they eat many of the same prey as murres, this competition likely compounded the food supply problem for murres, leading to mass mortality events from starvation,” Piatt said.

As the largest mass die-off of seabirds in recorded history, the common murre event may help explain the other die-offs that occurred during the northeast Pacific marine heatwave, and also serve as a warning for what could happen during future marine heatwaves, the authors said.

UW scientists recently identified another marine heatwave forming off the Washington coast and up into the Gulf of Alaska.

“All of this — as with the Cassin’s auklet mass mortality and the tufted puffin mass mortality — demonstrates that a warmer ocean world is a very different environment and a very different coastal ecosystem for many marine species,” said Parrish, who is also the executive director of the Coastal Observation and Seabird Survey Team, known as COASST. “Seabirds, as highly visible members of that system, are bellwethers of that change.”

For more on this topic please check out the video below. What do you think about all of this? While it might seem a bit crazy as a whole, it is something that really did happen and in the future, our awareness of it could help predict similar issues.