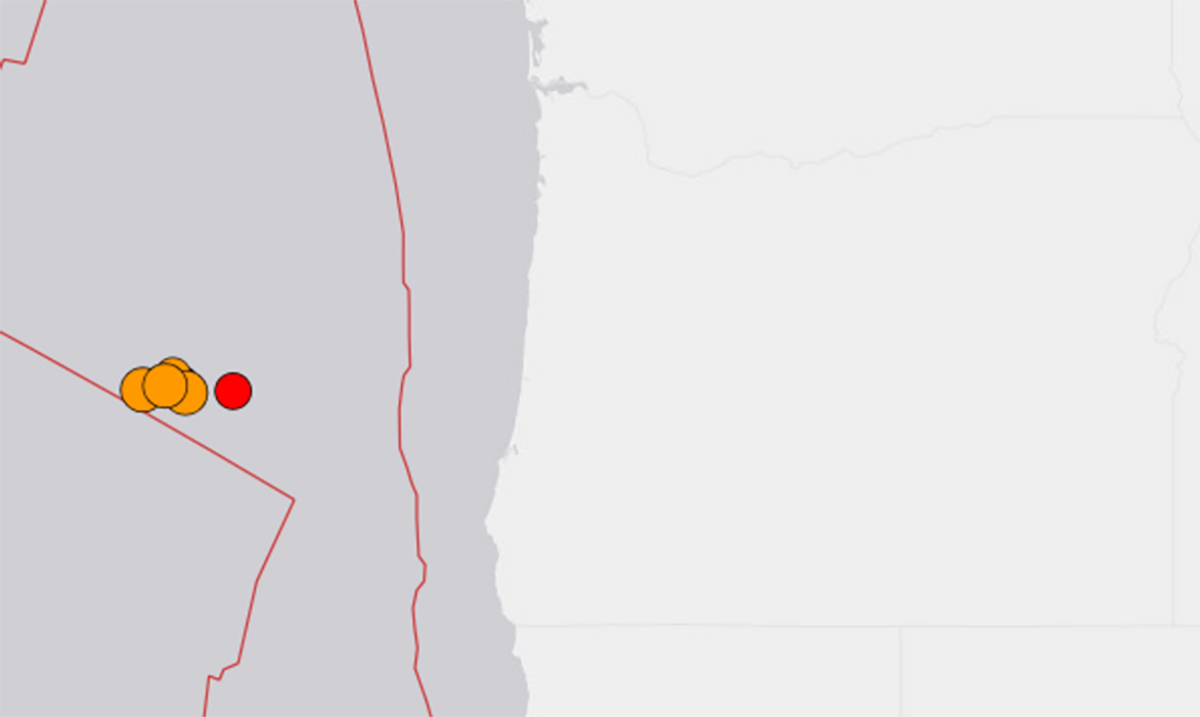 Swarm Of Over 40 Earthquakes Causing Buzz In Northwest US

By Harley MansonDecember 9, 2021No Comments

One of North America’s most active fault lines rose to life on Tuesday after a swarm of more than 40 earthquakes rattled off the coast of Oregon.

In the past week, over 50 earthquakes have hit the U.S. ranging in magnitude. The National Weather Service announced Tuesday that a swarm of Earthquakes had hit the Oregon coast, with the strongest hitting a magnitude of 5.8.

“If you had asked me yesterday where on Earth would be most likely to produce a bunch of magnitude 5.0+ quakes in a single day, this would have been high on my list,” Harold Tobin, Director of the Pacific Northwest Seismic Network at the University of Washington explained to CNN.

The quakes that have happened took place because of the Blanco Fracture Zone fault line, and according to data from Oregon State University, this fault is far more active than the San Andreas Fault in California, producing over 1,500 quakes of a magnitude of 4.0 or greater since the 1970s.

“Blanco Fracture zone quakes are strike-slip (lateral motions of the crustal blocks on either side, rather than up-down displacement), so it is very unlikely for them to pose a tsunami threat, even if a bigger quake happened, like a magnitude 7.0 for example,” Tobin told CNN.’

There has been a ‘swarm’ of earthquakes off the Oregon coast this evening; the strongest reaching 5.8!

Such swarms are common. Thankfully, they mostly occur far from shore along strike-slip faults.

This means there is NO tsunami risk because little water is displaced! pic.twitter.com/8reA3m3rL0

So, while these earthquakes have taken place rather quickly, they don’t pose a tsunami risk, which is a major concern when it comes to earthquakes in that region.
Even with the massive amount of magnitude 5.5+ earthquakes happening during a short period, which is interesting, this event or swarm is not alarming. While the activity did not trigger a tsunami alert, it did heighten the concern level for some. The quake occurred on the neighboring Cascadia Subduction Zone, a megathrust fault much closer to land. Where the Juan de Fuca plate dives underneath the North American Plate. This fault can not only trigger devistating tsunamis but also destructive shaking.

Concerns Of The ‘ Big One’

Even though the epicenter of this weeks earthquakes is the Blanco Fracture Zone, one of the most seismically active in North America, it rarely leads to destructive quakes.

Seismologist Dr. Lucy Jones says, there have been more than 133 quakes of magnitude 5 or greater on the Blanco Fracture Zone since 1980 and have nevr been followed by something on land.

Concerns have been raised for the so called “big one”, but Harold Tobin told CNN that that is not necessarily the case.

“There’s quite a lot of distance from these quakes to the Cascadia Subduction Zone,” Tobin explained. “Our best current understanding of how stress transfers through the crust (and mantle) would suggest that these events don’t change stress on the subduction zone appreciably.”