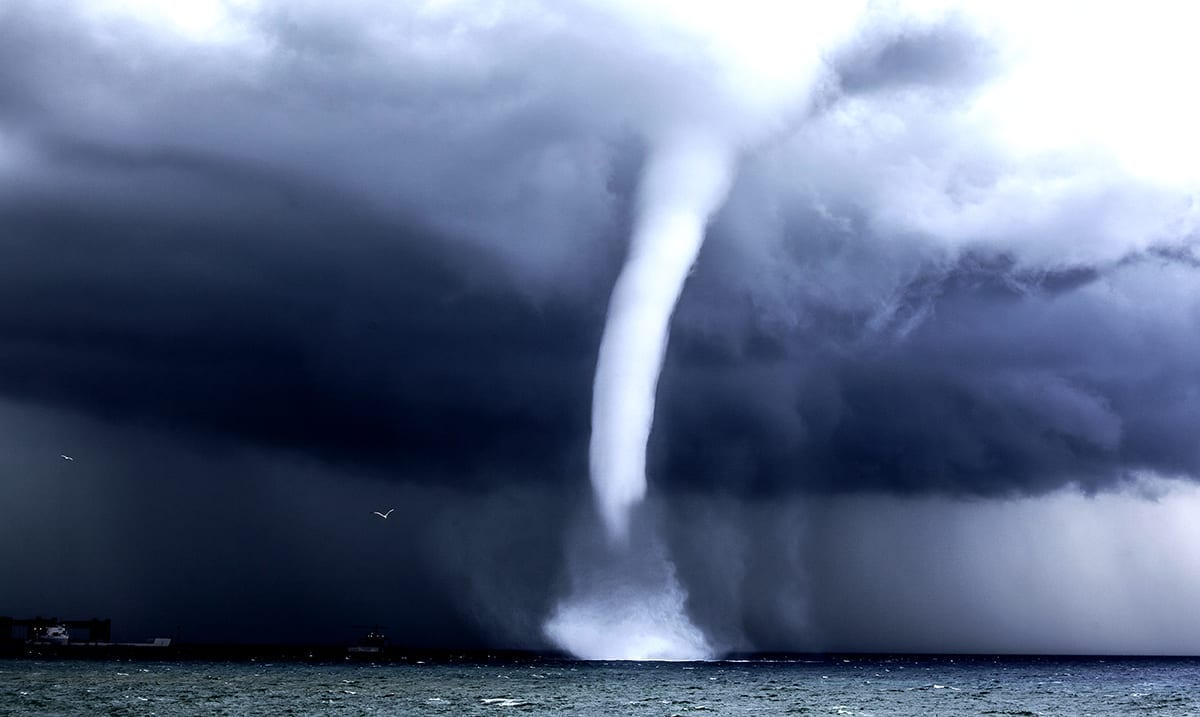 By Gerald SinclairAugust 28, 2020No Comments

As you may already be aware there were as of last week two storms headed for the US through the Gulf of Mexico and it seems things are only getting more intense. As Laura blasts Louisiana, some pretty insane things are being noted.

A video captured by Frank Leday actually shows roughly six water spouts or ‘water tornados’ at once. That being said, the number quickly increased. Now, for those who might not be aware water spouts or water tornados are basically tornados that form over water or happen to move from land into the water. This meaning they are not something we see every day.

WOW… I am gobsmaked…. 10 #waterspouts at the same time reported off the coast of Louisiana this afternoon 20th august! #severeweather #Tornado Absolutely incredible by 📸 Daniel Billiot Jr via @ScotPilie_Wx pic.twitter.com/AgL5A68HCK

While these water tornados were spotted days ago, their presence, in general, is quite interesting, and seeing footage of them really shows how mesmerizing and terrifying they are at the same time. As you will see in the footage below, this in itself is quite the sight.

Wow !! Ever see 6 water spouts at once ?"To use this content,media outlets must contact Naomi@tmx.news"

Fox 13 News wrote as follows reporting on this when these spouts were spotted:

Sightings of waterspouts churning off the state of Louisiana Thursday were reported, as videos and images circulated on social media.

One video shows up to six waterspouts southwest of Galliano.

Another shows a massive spout up close in Leevilee, La., near Grand Isle, according to New Orleans-based meteorologist Scot Pilie.

Ed Piotrowski, a meteorologist at WPDE, described it as the “most picturesque spouts I’ve ever seen. It almost looks like War of the Worlds out there!”

Tornadic waterspouts are tornadoes that form over bodies of water and are associated with severe thunderstorms and extreme weather, according to authorities. They develop downward from the sky.

As the days have continued to pass it seems conditions have gotten quite intense as Laura has made way to Louisiana. According to Weather.com as of today (August 27th), this storm has been moving across Louisiana with damaging winds and is quite intense. We hope all in the affected areas are doing the best they can to remain safe during all of this. While Laura is currently ‘tracking through Arkansas’ it is still a tropical storm. This means it will likely weaken as it continues on which would be the best-case scenario.

I know water tornados might not sound like much but they’re something a lot of people don’t realize even exist. As you have seen in the footage, they are quite real and they do happen from time to time. While these ones are long gone, we should be aware of the dangers that storms bring as Hurricane season is underway.

MUST SEE! New record of simultaneous waterspouts off the coast of Louisiana?