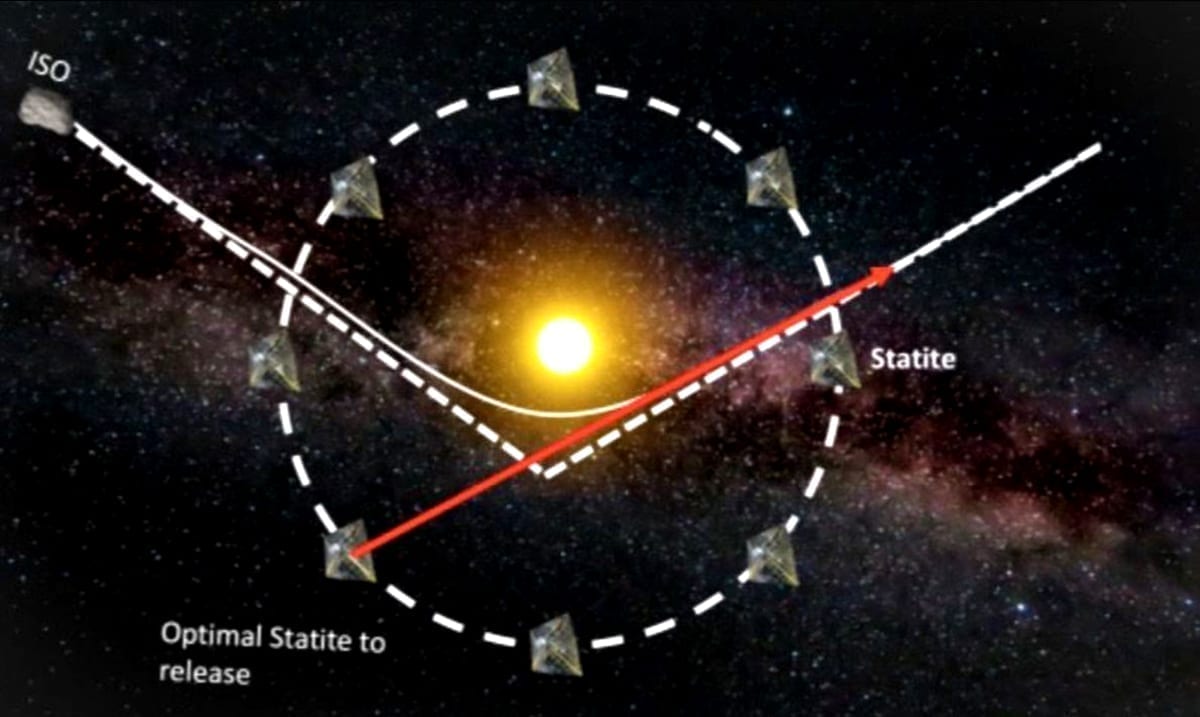 We are often encountering ‘interstellar visitors’ but not often able to study them as closely as we would like to. This leaving us with lots of missed opportunities but that may soon be an issue of the past.

NASA has funded a program including a team of researchers who are now studying whether it would be possible to deploy a fleet of ‘solar sailing sentries’ in space. These solar sailing sentries would allow researchers to gain a better look at the visitors we face in space and even could allow us a close-up view of Oumuamua. While still in its early stages we do not yet know what the future holds for this project the NIAC is working on.

Basically, if feasible ‘statites’ would be deployed which are static satellites according to Space.com. They would use solar radiation pressure to hover in place as time passes and thus allowing those behind the scenes to see things they otherwise would never be capable of seeing. We would all be gaining some interesting insight into the world of ISOs (interstellar objects).

NASA wrote as follows about this project on their website back in April:

The Grand Challenge of Visiting an Interstellar Object: The study of asteroids and comets has revealed a treasure trove of information about the formation and history of our solar system. In 2017, the first InterStellar Object (ISO) Oumuamua was discovered [1], and recently, in August 2019, a second object was discovered [2]. The existence of these ISOs offers us a great scientific opportunity to develop a detailed understanding of the formation and history of other star systems. In this proposal, a Dynamic Orbital Slingshot concept is proposed for a rapid flyby and rendezvous mission to an ISO (e.g., Interstellar asteroids, comets). Studying ISOs up close will be critical to answering fundamental scientific questions; however, due to their high heliocentric velocities and relatively short lead time, this may be extremely difficult with current satellite propulsion systems. This work proposes the use of a statite [3], an artificial satellite that employs a solar sail to continuously modify its orbit, allowing it to hover in place. The proposed system has the smallest possible orbital period for a given distance. In essence, the solar sail is stationary in the heliocentric frame. Once an ISO is detected, the system can deliver a CubeSat on either a flyby trajectory or on a rendezvous trajectory (with propulsion). The proposed use of statites for fast response to newly detected ISO is at the center of the innovation for the proposed work, and this study will investigate the feasibility of rapid flyby and rendezvous missions.

Yes, this would in a sense be a solar-powered slingshot of sorts and that makes it sound even more mind-blowing, doesn’t it? This would in many ways change the way we research space and make a lot of things we do so much more in-depth. While it might not sound like a lot because we hear about things monitoring different areas and celestial beings in space quite often, it will be a huge feat if accomplished.

MIT News wrote as follows about this when speaking to those working closely with it:

To closely observe an ISO hurtling through space, time is of the essence. Richard Linares, an assistant professor in the Department of Aeronautics and Astronautics (AeroAstro) at MIT, developed a concept for a “dynamic orbital slingshot for rendezvous with interstellar objects.” He outlined his idea in a research proposal that was recently selected as a Phase 1 study in the NASA Innovative Advanced Concepts (NIAC) Program, which “funds innovative aerospace concepts that could enable and transform future missions.”

“There are a lot of fundamental challenges with observing ISOs from Earth — they are usually so small that light from the sun needs to illuminate it in a certain way for our telescopes to even detect it,” said Linares, who is the director of the Astrodynamics, Space Robotics, and Controls Laboratory, part of the Space Systems Laboratory in AeroAstro. “And they are traveling so fast that it’s hard to pull together and launch a mission from Earth in the small window of opportunity we have before it’s gone. We’d have to get there fast, and current propulsion technologies are a limiting factor.”

To eliminate these barriers, Linares instead proposes using statites, or “static satellites” enabled by a solar sail constructed with just the right mass-to-area ratio. A thin enough sail with a large enough surface area will have a low enough mass to use solar radiation pressure to cancel out the sun’s gravitational force no matter how far away it is, creating a propulsive force that allows the statite to hover in place indefinitely. Linares envisions deploying a constellation of statites to act as interstellar watchdogs along the edges of our solar system, lying in wait until roused by an ISO crossing our threshold.

Once detected, the solar sail then enables the statite to switch gears quickly and spring into action. Since the statite has a velocity of zero, it is already in position for efficient trajectory. Once released, the stored energy in the solar sail would leverage the gravitational pull of the sun to slingshot the statite in a freefall trajectory towards the ISO, allowing it to catch up. If the timing is right, the statite could tag the ISO with a CubeSat armed with onboard sensors to orbit the ISO over an extended period of time, gathering important scientific data.

“Flyby missions tend to be easier because they don’t require you to slow down — you fly past the object and try to get as many pictures as you can in that window,” says Linares. “A rendezvous mission is harder because you have to slow down and match the speed of the object so you can stay with it for a while. But the longer you can stay around the interstellar object, the better pool of data you can collect. Good science happens up close.”

What do you think about all of this? I find it truly fascinating. Perhaps we will be able to get a closer image of some of the things going on and moving around in space sooner than you’d imagine.