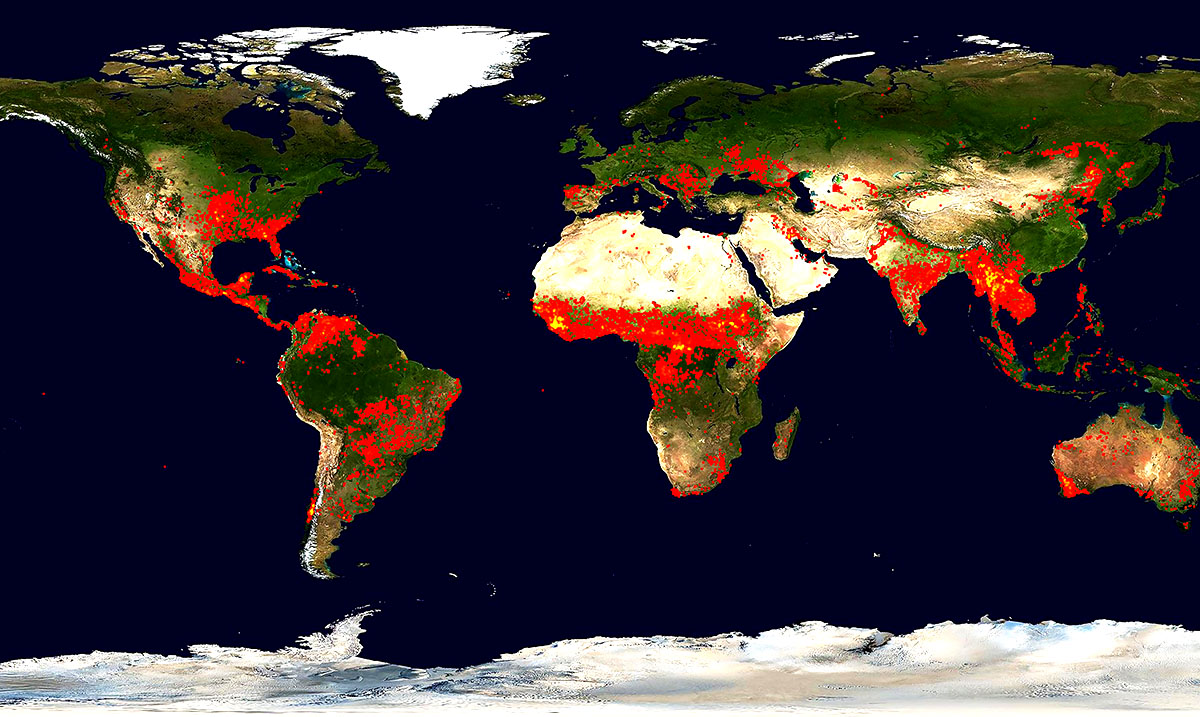 By Gerald Sinclair December 17, 2019 No Comments

There is no denying that the planet itself has spent a lot of time in 2019 seemingly on fire in many places. While not many have really stopped to look at just how serious the damage has been, seeing it in this way puts a lot of things into perspective.

The Copernicus Program in Europe recently pulled together their data to make a visualization of different things that happened during 2019 and that included all of these devastating fires. This visualization reveals just how much worse these wildfires have gotten as time has progressed and many areas are quite lit up. Some places you may have not even heard about facing fires are noted in this visualization and that in itself is quite

While this clip is not long, it does leave a lasting message. This year we’ve faced wildfires in California, the Amazon, and even Australia. Places like Tasmania and even some areas you’d imagine being quite cold year-round are present on this visualization.

Earther.Gizmodo wrote as follows in regards to this visualization and the message it brings forth:

Wildfires, forest fires, and bushfires have hit basically every part of the globe in 2019. And there have been horrific consequences. Such fiery happenings are only going to worsen as the planet continues to warm. That’s what climate change does—and will continue to do unless we stop emitting greenhouse gases into the atmosphere. High temperatures dry out vegetation and make the perfect conditions for fires to spark and spread. Ecosystems are suffering as a result, but, more importantly, so are people.

After its worst fire season on record last year, utilities in California that sparked some of those deadly fires resorted to shutting off power for days at a time to avoid more fires (it didn’t always work). Then there’s the aforementioned haze from Australia’s mega-fires burning now. And fires in the Amazon have basically been a form of genocide used against indigenous groups.

This was 2019. Imagine what the next decade will look like.

As you will see below the places lit up with burning orange are the ones that are on fire. As 2019 passes the fires change and new ones come forth as old ones burn out. Some places burn out quickly while others never seem to get a break no matter how far into the year we get

The Kincade fire in California alone could have ended up doing over 10 billion dollars worth of damages and that was not the only fire blazing in that state at the time. Indigenous people who call the Amazon home were forced to flee and animals in tons of different places were either badly injured or lost their lives. The Australian bushfires may have effectively doomed the Koalas in regards to living in the wild and the planet as a whole has changed.

This kind of thing should not be taken lightly and as 2020 comes forth we need to do better. While fires are something we will always face they are controllable and preventable in more ways than it seems we are currently willing to put effort into. What does the video above make you feel or think in regards?