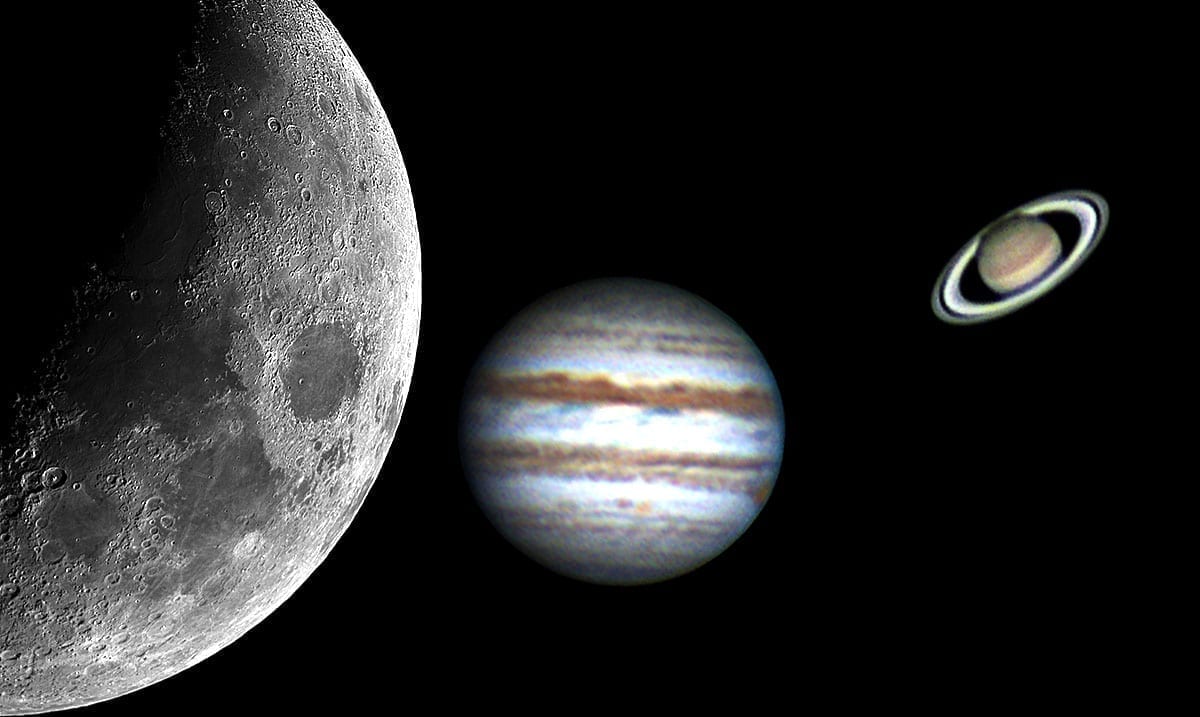 Saturn, Jupiter, And The Moon Form A Triangle In The Sky Ahead Of The Great Conjunction

We do not see this kind of thing often so if you want to see a space triangle that consists of several celestial bodies I suggest looking up. This month we’ve been able to catch glimpses of lots of celestial bodies but with these two planets so close to the moon, they’re forming a triangle.

While we still have a little time before the great conjunction is set to occur, these celestial bodies are now more present than usual. For those who might not know the great conjunction is something that will mean these planets are making their closest encounter since 1623, according to Space.com. They will be so close to one another during that moment that they will look as if they are one in the night sky.

While it will not occur until late December, right now you can still see these two planets pretty close to one another. As they move closer and closer, the triangle they are forming now will not last long. I suggest taking a peak now while you have the chance. That being said, seeing them grow closer to one another, in general, is also quite the sight.

Thrillist wrote as follows on this interesting space triangle:

The trio will come together on the night of November 19. Jupiter and the moon will have a conjunction—an event where they share the same right ascension and come close together—mere hours before Saturn and the moon have one in the evening, keeping all three in close proximity throughout their short stay in the Thursday evening sky.

Unfortunately, you’ll only have a short amount of time to catch the trio in the sky once the sun sets. (Though, the sun sets so miserably early in the US right now that you don’t have to stay up late to see the spectacle.) Both planets are quite bright and visible from inside cities despite the light pollution that renders the majority of the night sky invisible. Jupiter and Saturn will be visible in the south-southwest as the sun fades. They’ll only remain up until just after 8:30 pm local time. Jupiter will set at 8:38 pm, and Saturn will go down at 8:57 pm, according to In the Sky.

This is another step toward the once-in-20-years great conjunction between our solar system’s two largest planets. On December 21, they’ll be only 0.1 degrees apart. It’ll be an amazing sight, but so are the little formations you can see with the naked eye along the way, like the triangle on the night of November 19.

Now, as noted above on the night of the 19th (tonight) they will be making an almost perfect triangle, that doesn’t mean that looking at this event tomorrow will be lackluster. These two space bodies will still be near the moon and in somewhat of a triangle for the rest of the month as well, within reason. This conjunction we’re going to face in December will be the closest one with these two until the year 2080 and so, these planets being in one another’s presence is something we should all be keeping our eyes out for.

Earth Sky wrote as follows on this great conjunction:

At conjunction, Jupiter and Saturn won’t be truly close together in space. They’ll just be chugging along as usual, in their vast orbits around the sun. But they’ll appear near each other along the our line of sight from Earth. At their conjunction on December 21, 2020, Jupiter will be nearly 6 astronomical units (AU) from Earth, while Saturn will be nearly 11 AU away. One AU = sun-Earth distance of approximately 93 million miles or 150 million km.

Despite their great distances from Earth, these planets nonetheless shine brilliantly in Earth’s sky because they’re huge worlds that effectively reflect sunlight. Jupiter has a volume of over 1,300 Earths; that is, 1,300 Earths could fit inside Jupiter. Meanwhile, Saturn has a volume of over 760 Earths. Additionally, Jupiter reflects 52% of incoming sunlight while Saturn reflects 47% of its incoming sunlight. In contrast, Earth’s moon only reflects about 12% of the sunlight that strikes its surface.

Saturn is the most distant world that you can easily see with the unaided eye. Although you need a telescope to view Saturn’s rings, the rings are tilted toward Earth in 2020, which adds all the more to Saturn’s apparent brilliance as seen from Earth.

Will you be taking the time to look up tonight or over the next few nights? I know, I will. My telescope has been out and ready all month and so far I’ve seen some pretty amazing things.