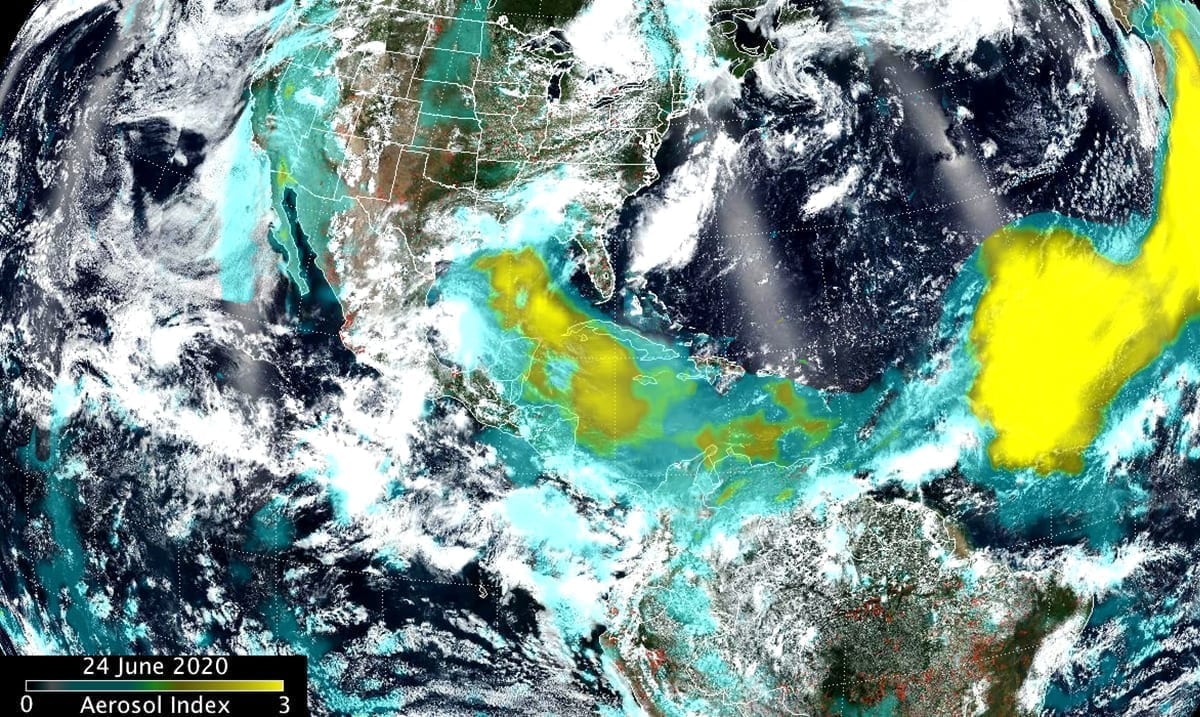 Sahara Dust Plume Sweeping The Atlantic Is The Largest Ever Recorded

While these dust plumes are something we see from time to time some are much bigger than others. In recent times one moving across the Atlantic has really been making headlines.

This newer Saharan dust plume according to Space.com is so massive it’s been nicknamed ‘Godzilla.’ We work to be aware of these kinds of things because when they come in contact with places where people live, they can drastically affect air quality which is dangerous. That having been said, these plumes are important for the world as a whole. They are actually part of its nutrient cycle.

Space.com wrote as follows on this dust plume:

ESA watched this year’s dust plume throughout the month of July using its Copernicus Sentinel-5P satellite, a crucial component of its Earth-observation fleet. The satellite is tailored to study small particles in the air, like dust and pollutants.

Typically, much of the dust in the plume ends up sinking in the Atlantic Ocean, where it feeds tiny microscopic organisms called plankton. When it reaches land, the influx of dust can change the way ecosystems function, including by fertilizing the Amazon rainforest. It can also interfere with the formation of tropical storms and hurricanes, although it can be dangerous for humans to breathe in.

Plumes like this move across the Atlantic every year but this one is quite bigger than we’re used to seeing. You see, as noted above normally these plumes sink into the ocean but this one isn’t doing much of that as of yet. As those watching this on satellite continue to view it, this plume is being considered as possibly record-breaking in size.

Universe Today wrote as follows on this dust plume:

Though its appearance in satellite imagery is foreboding, the dust plume might actually be good news. According to the NOAA, these plumes can actually inhibit the formation of hurricanes. And it can also prevent the ones that do form from becoming more powerful and destructive.

The dust is also a nutrient source for phytoplankton, the tiny marine plants that float near the surface of the ocean. Phytoplankton is critical to the food web, providing food for animals higher up the food chain. Phytoplankton is also photosynthetic, creating oxygen for the biosphere.

The dust plumes also replenish nutrients as far away as the Amazon rain forest. The heavy and frequent rains there can deplete essential nutrients. Without these plumes, the Amazon likely wouldn’t exhibit such stunning biodiversity and may not have such an intricate food web.

But there is bad news associated with the dust plume. The haze can trigger air quality alerts, and can be a health risk, especially for people with underlying health conditions. That’s partly because the dust has travelled so far that many of the larger particles have fallen to the surface. What’s left is the smaller particles, which are most dangerous to people.

But for many people in the path of the plume, the part they’ll remember is the sunsets. With all that dust in the air, the sunsets and sunrises will look stunning.