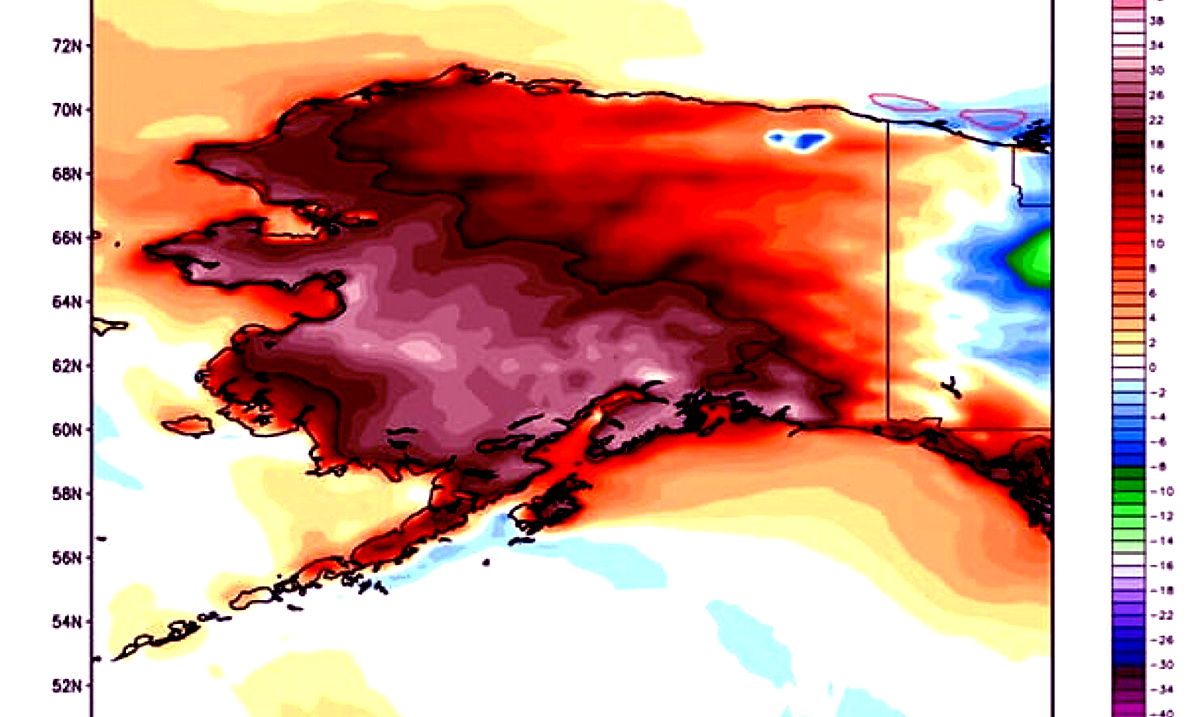 By Gerald SinclairJune 3, 2019No Comments

At the moment and for the past couple months Alaska has been facing extremely high temperatures, very different from the ‘norm.’ This kind of temperature difference has caused deaths, unsafe travel conditions, and is doing much more damage than most care to really acknowledge.

According to Hakai Magazine temperatures in Alaska have been averaging at least eleven degrees Celsius above the normal. This reaching almost twenty-two degrees above the usual back in March on the thirtieth. While that might not sound like a lot to those of us who are not familiar with the area, to those who live there it is quite hazardous. This kind of thing is seriously affecting not only the lives of people but also wildlife.

Hakai Magazine wrote as follows on the topic:

On April 15, three people, including an 11-year-old girl, died after their snowmobiles plunged through thin ice on the Noatak River in far northwestern Alaska. Earlier in the winter, 700 kilometers south, on the lower Kuskokwim River, at least five people perished in separate incidents when their snowmobiles or four-wheelers broke through thin ice. There were close calls too, including the rescue of three miners who spent hours hopping between disintegrating ice floes in the Bering Sea near Nome. Farther south, people skating on the popular Portage Lake near Anchorage also fell through thin ice. Varying factors contributed to these and other mishaps, but abnormally thin ice was a common denominator.

In Alaska, ice is infrastructure. For example, the Kuskokwim River, which runs over 1,100 kilometers across southwestern Alaska, freezes so solid that it becomes a marked ice road connecting dozens of communities spread over 300 kilometers. In sparsely populated interior Alaska, frozen rivers are indispensable for transporting goods, visiting family, and delivering kids to school basketball games.

Along Alaska’s west coast, the frozen waters of the Bering Sea also act as infrastructure. Each winter, frigid air transforms much of the Bering between Russia and Alaska into sea ice. As it fastens to shore, the ice provides platforms for fishing and hunting, and safe routes between communities. It also prevents wave action and storm surges from eroding the shores of coastal villages.

The steady decline of sea ice is old news, but 2019 brought exceptional conditions. In January, a series of warm storms began breaking apart the ice, which had formed late and was thinner than usual. By late March, the Bering Sea was largely open, at a time when the ice usually reaches its maximum for the year, which historically has been as much as 900,000 square kilometers (more than twice the size of the province of Alberta). In April, US federal scientists reported coverage was even lower than the unprecedented low extent of 2018. By mid-May, ice that should have persisted into June was almost entirely gone.

Declining sea ice and melting permafrost are having devastating impacts on Alaskan villages. Since 2003, the United States Government Accountability Office has identified at least 31 communities at risk, with erosion imperiling homes, roads, and drinking water sources. Three villages—Kivalina, Newtok, and Shishmaref—must relocate soon or cease to exist, a traumatic reality brought into sharper focus by the warm 2019 winter.

With disappearing ice and so much more going on it seems that access to hunting routes and so much more are becoming quite limited. Throughout March alone Anchorage saw no measurable snow and that in itself is only the second time it’s ever been recorded as such. Coping with challenges brought on by this are no easy feat.

This is startling: for Alaska as a whole, March is going to be the 29th month since Jan 2013 to be ranked in the warmest ten percent since 1925. That’s 39% of months. In the same period, one month, April 2013, ranks in the coldest 10%. #akwx #Arctic @Climatologist49 @IARC_Alaska pic.twitter.com/VucrVBvJT5

March was the warmest of record over all nearly of Alaska north of the Alaska Range & Bristol Bay. Some places on the North Slope & in Northwest Arctic Borough were more than 20F (11C) above normal. Early snowmelt southern areas. #akwx #AKclimatehighlights @AlaskaWx @SNAPandACCAP pic.twitter.com/Oa9a9PMVcJ

This year so far has been quite devastating in many aspects when you look at things from this perspective. The climate is drastically changing and its effects are beginning to settle in. According to Rick Thoman a climate specialist who works with the Alaska Center for Climate Assessment and Policy actually told AFP that the dramatic warming Alaska has experienced in the years past has wreaked havoc on local communities, wildlife, and the economy. It seems even crab fishing has been affected as the ice platforms are either too thin now to get on or not present at all.

To learn more about this serious issue please check out the video below. What do you think about all of this? I for one am quite shocked and very overwhelmed.