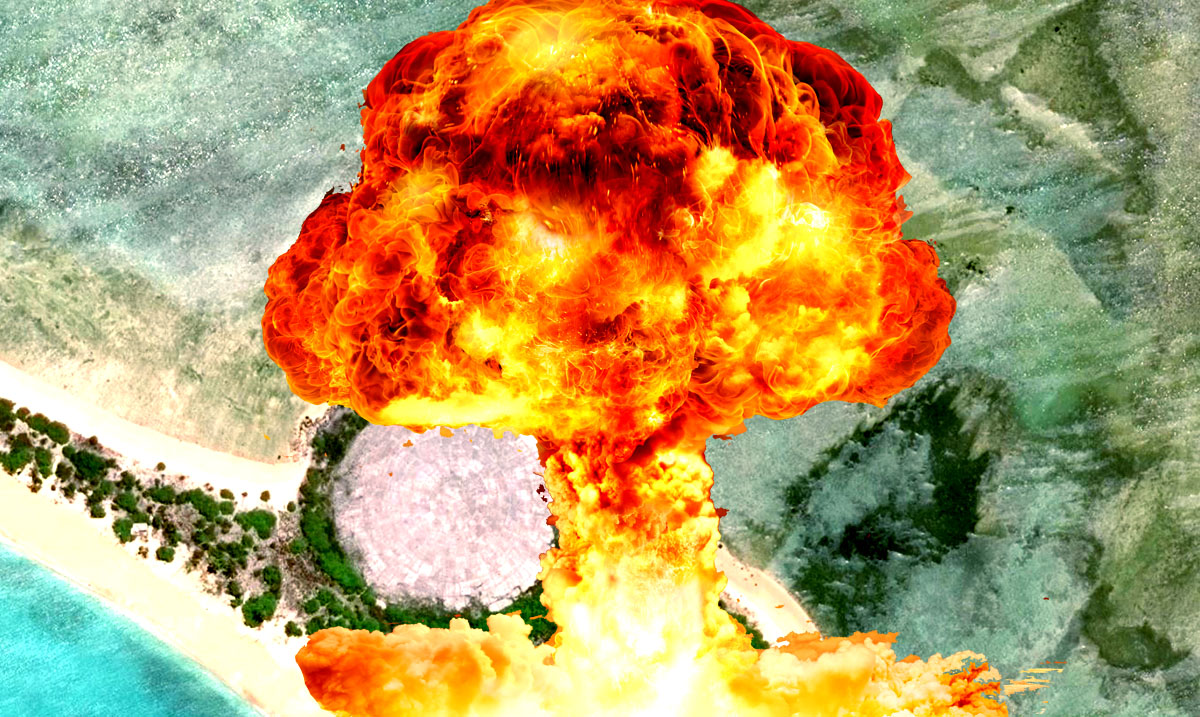 We all know about the two disasters that occurred in Fukushima, Japan (at the Fukushima nuclear plant) and the Ukraine at the Chernobyl Nuclear plant but not many people know about what the US did to the Marshall Islands and what is still happening as a result. From the 1940s to the 1960s the US did nuclear testing there and those nuclear tests were far more damaging than you could ever imagine.

A number of locations in the Marshall Islands make-up what is or was the Pacific Proving Grounds, this for those who do not know is where the US decided it would do its nuclear testing throughout the 40s and on into the 60s. The US conducted a total of at least 67 tests on different areas within these islands and most happened near Enewetak Atoll and Bikini Atoll. That being said, the fallout from these tests spread throughout the Marshall Islands as a whole. By dropping nuclear weapons to see how they would affect naval warships, ‘atomic scientists’ were basically allowed to run rampant in the area.

While the US had done many tests before the largest nuclear detonation was something they did at Bikini Atoll on March 1st of 1954. This was something that is called ‘Castle Bravo and was part of what was and is known as Operation Castle. While the risks were something we knew about, those driving this test pushed forward.

In regards to this test Atomic Heritage wrote as follows:

Despite potential risks, Major General Percy Clarkson and scientific director Dr. Alvin C. Graves ordered the test to continue as planned. Due to Castle Bravo radioactive debris was released into the atmosphere and to surrounding atolls. The test was more powerful than scientists predicted. Ocean currents, weather conditions, and wind patterns contributed to this spread of fallout and debris. The fallout was composed of pulverized coral, water, and radioactive particles, and it fell into the atmosphere appearing as ashy snowflakes. This affected nearby atolls and U.S. servicemen. Traces of radioactive material were later found in parts of Japan, India, Australia, Europe, and the United States. This was the worst radiological disaster in U.S. history and caused a worldwide backlash against atmospheric nuclear testing.

While all of this is in the past, it is still affecting people today, the area is still quite radioactive and those who were forced out of their homes and off the islands back during the times that these testings were being done have never gained the compensation they deserved. Sure, there are tribunals and other things in place for these people and their families but those are nowhere near enough.

In regards to current radiation levels in the Marshall Islands Atomic Heritage continued as follows:

The radiological legacy of U.S. nuclear weapons testing in the Marshall Islands still affects the Marshallese today. U.S. nuclear testing ended in the Marshall Islands in 1958, but a UN report in 2012 stated that the effects of this testing are long-lasting. The city of Majuro is now home to the majority of the Marshallese population. Today, radiation-related cancers and birth defects are a major problem faced by the Marshallese. The RMI also struggles with high suicide rates and high alcoholism rates. Diabetes (due to large amounts of imported, processed food) and cancer are the top two causes of death. Environmental issues such as rising sea levels, and degradation attributed to nuclear testing, are also problems and often force residents to move between atolls.

Remembrance Day, March 2, is now an official holiday in the RMI. This holiday honors the victims and survivors of nuclear testing. Many activists in the RMI want to ensure the protection of future generations and to ensure that the U.S. government pays the settlements. They work to raise awareness of current health and political issues the RMI faces, due to past nuclear testing. Lani Kramer, a Marshallese councilwoman, stated, “As a result of being displaced we’ve lost our cultural heritage- our traditional customs and skills, which for thousands of years were passed down from generation to generation.” RMI President Christopher Loeak stated that U.S. compensation “does not provide a fair and just settlement” for the damage caused by nuclear testing.

In 2014, the RMI attempted to sue the U.S. and eight other nuclear-armed nations. The RMI filed the “Nuclear Zero Lawsuit,” claiming that the countries have failed to move towards nuclear disarmament. The RMI did not seek monetary compensation or cleanup operations. Instead, the RMI wanted the nations to comply with the Nuclear Non-Proliferation Treaty, meaning that nations should work to decrease their nuclear arms and that nuclear power should only be promoted for peaceful uses. In 2017, the U.S. Ninth Circuit Court dismissed the lawsuit.

According to a 2016 Columbia University study, radiation levels in some areas of the Marshall Islands are almost double of what is deemed safe for human habitation; but overall the islands are slowly becoming less radioactive. Very few Marshallese today live on Rongelap and Enewetak Atolls. Scientists visit Bikini Atoll, and a few caretakers live there. It is not clear when the Marshall Islands will be radiation-free, or if people will return to Bikini Atoll. Radiation levels and climate change have led to overcrowding in the capital city of Majuro. Cleanup efforts continue throughout the islands and the Marshallese continue to advocate for compensation.

That research carried out by Columbian University as noted above actually went over how intense the radiation is these people are suffering through even now. This study is titled ‘background gamma radiation and soil activity measurements in the northern Marshall Islands’ and it is quite shocking, to say the least. They found that their findings showed clear low external gamma radiation levels on some islands in the Enewetak Atoll and Utirik Atoll as well as elevated levels on Enjebi Island, Bikini Atoll, and Naen Island.

Samples from this location at Bikini Atoll itself were up to 1000 times higher than samples taken from areas affected by the Chernobyl and Fukushima disasters. The waste here is currently flowing into the waters surrounding these islands and thus making their ways throughout the ocean. To learn more on this topic please feel free to check out the video below. Nuclear disasters come in many forms and it seems testing in itself is yet another, how do you feel about all of this?