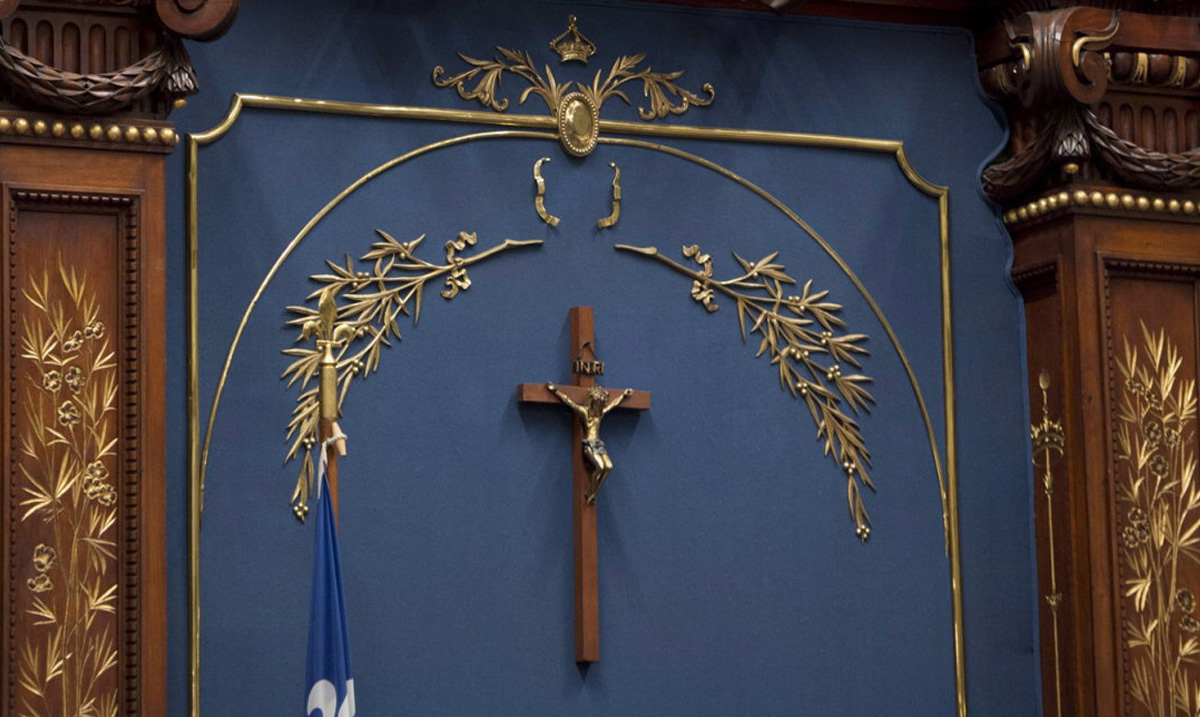 As you may be aware, there is a crucifix hanging in Quebec’s National Assembly. This is something that has been considered a bit controversial as not everyone is a Christian.

Francois Legault Quebec’s incoming premier says that there is no reason for the crucifix to be removed. While he is all for banning religious symbols (he says) he claims the crucifix in this instance is not a religious symbol. He made several comments defending his decision to keep it hanging where it has been hanging for years all the while intending to make it banned for civil servants to wear religious symbols themselves.

The crucifix we are going over has been above the speaker’s chair in the National Assembly since 1936. The removal of it is what I guess you could consider to be a delicate issue. Now the ban I mentioned above would literally ban civil servants from wearing things like hijabs and kippas. This would affect everyone from teachers to police officers and everyone in between.

BBC reported as follows on the topic:

The debate over religious symbols in Quebec public life has been a perennial issue for the past decade.

In 2014, the Parti Quebecois proposed a so-called Charter of Values bill, that would ban all public servants from wearing “ostentatious” religious symbols or clothing.

Many decried the bill as Islamophobic and anti-Semitic, but proponents said the law was meant to promote secularism and separate Church and state.

Since winning a majority in last week’s election, Mr. Legault’s Coalition Avenir Québec party has renewed the call to ban all religious symbols and has even said he would consider firing teachers who refused to comply with the ban.

“We have to understand our past,” Mr. Legault said.

“In our past, we had Protestants and Catholics. They built the values we have in Quebec. We have to recognize that and not mix that with religious signs.”

His willingness to ban religious symbols – whilst refusing to take the crucifix down from the legislature – has drawn much criticism.

Seems a bit one sided now, doesn’t it? In regards to keeping the crucifix around, Legault said it was something that helped people remember their past and that it was a reminder of the role of French Catholics and British Protestants in Quebec’s history. Claiming those things set it apart from religious signs. The plan to ban religious symbols in general for civil servants has sparked outrage and protests in Montreal and many say the CAQ is trying to create an issue over something that is not a problem at all.

Global News reported as follows on Legault and his unwillingness to remove the crucifix despite his current model for religious neutrality:

When asked if he would reconsider removing the crucifix in the legislature, Legault also upheld his newly-elected government’s stance on the issue.

Simon Jolin-Barrette, a spokesman for the CAQ transition team, said earlier this week there is no contradiction between the party’s plan to impose strict religious-neutrality rules on certain public servants and its desire to maintain the crucifix.

What do you think about all of this? Should there be a line drawn and is this whole situation silly? Should CAQ back down and leave civil servants alone?