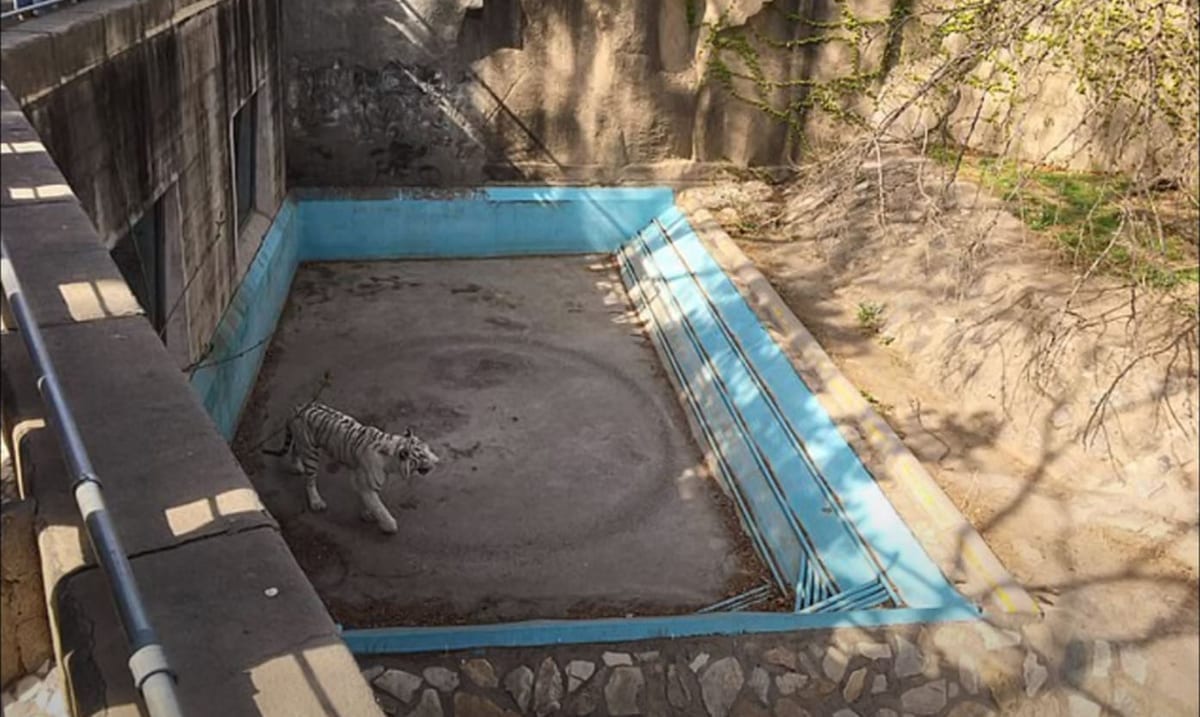 When you go to the Zoo here in the US sure, you’ll see tigers and other things like that but their enclosures are much different than some of the ones you will find around the world. For instance, in China, there seems to be a big issue with how beasts of prey are kept, and well, it’s taking a toll on them.

In recent times a video has been circulating of a white tiger in a pitiful enclosure simply walking in circles. As you can see in the video below, this poor tiger has been walking in circles so much that there is a deep track in the ground. This is something that is believed to be a psychological response from the poor thing not being able to roam freely and being in inadequate circumstances.

The Express when reporting on this topic has noted that Doctor Sun Quanhui who happens to be a senior scientific adviser at World Animal Protection China says the living conditions of creatures inside China’s animal facilities are ‘a cause for concern.’ The conditions animals are living in at these ‘zoos’ in China have been a concern for many years now and things don’t seem to be changing much if at all to help the animals being held within them. We have heard tons of different heart-breaking stories about these places but honestly, their severity doesn’t sink in truly until you see them in video or perhaps even in person.

When touching on the subject of the conditions of Chinese zoos South China Morning Post wrote as follows back in 2017:

A donkey was thrown into a tiger enclosure to be eaten alive. A brown bear so malnourished it looks like a bag of bones. Siberian tigers so obese they are mocked by visitors. A crocodile living alongside piles of rubbish in a dried-up pond, and a snake lying dead in its tank, unnoticed by its keeper.

All of these stories come from Chinese zoos and animal parks, which over the years have made headlines both at home and abroad. Several of them date back just weeks.

Despite the mountain of evidence against them, animal rights activists say most badly run zoos and wildlife parks are not being called to account for the maltreatment of their animal charges as their businesses continue to flourish amid a booming domestic tourism market.

“I’ve never imagined the kind of life the animals in such parks are living,” said Li Nan, a visitor who witnessed a live donkey being pushed into a tiger enclosure earlier this month at the Yancheng Safari Park in Changzhou, eastern China’s Jiangsu province.

“The incident really opened my eyes and made me think about the issue [of zoos’ maltreatment of animals].”

A video of the incident, in which a group of men is seen hauling a donkey from a truck and pushing it off a wooden ramp into the moat around the big cats’ enclosure, went viral online. One of the big cats quickly pounced on the stricken beast as another clawed at its back and head. The horrific ordeal lasted about half an hour before the donkey died. The zoo has yet to face any penalty for the incident.

Government-run zoos are ubiquitous in Chinese cities, while wildlife parks, most of which are privately owned, have flourished in recent years amid rising demand.

Now that we’ve noted how deep and driving the issue itself is, let’s get back to this specific tiger. This tiger doesn’t have enough room and while it may have more room than some tigers in other zoos or places of the sort, it is struggling and that much is quite clear. Many have speculated that the tiger is severely depressed and well, I am sure you’re also coming to that conclusion after seeing the video for yourself.

While it has been claimed that the tiger has been given ‘psychological counseling’ after the ‘strange behavior’ was noticed at the end of March but with how deep that circle is where the tiger was walked we can assume the counseling was not adequate. That all having been said, this video is bringing awareness to the animals stuck in zoos across the world, they too need to have their voices heard especially considering they cannot speak for themselves.