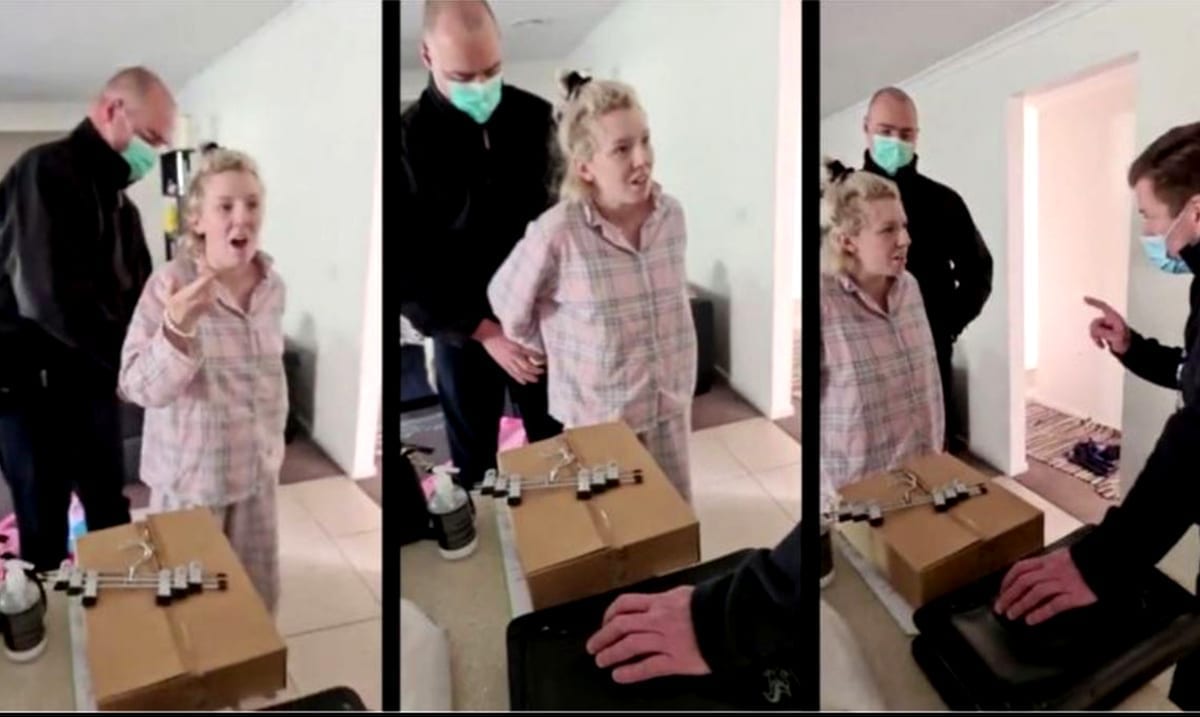 While Australia is a country many are quite jealous of in general, it seems the way that officials are treating citizens is not what you’d expect. A video has been going viral online as of late that shows a pregnant woman who was being arrested and having her house searched all over her ‘anti-lockdown’ posts online.

The woman in the video’s name is Zoe Lee Buhler who is 28 years old and was placed in handcuffs inside of her home while her children were present. As you can see in the footage the officers that entered her home had a search warrant and she is questioning because she has done nothing to warrant such actions against her. Basically, she was arrested for incitement.

It seems her posts on Facebook in relation to an anti-lockdown protest was considered ‘inciting.’ While she continues to reaffirm that she has done nothing wrong the officer still continues with arresting her. After even offering to take the post down, nothing seems to please those taking her in. According to The Mirror, her offense came from posting an event she had created for a peaceful protest. This under the name ‘Freedom Day Ballarat’ and detailed that even social distancing measures would be followed during the event.

This whole arrest overall has been highly controversial with good reason. While according to BBC authorities are still saying they took appropriate actions, when you look at things it really does not appear as such. I guess what it all boils down to is how you feel on lockdown and things of that nature, here in the US protests have been happening left and right all over and well, with the pandemic we’re facing they are a bit dangerous which is why Australia is trying to keep them from happening, right?

The BBC wrote as follows on this topic:

The video – which was live-streamed on Facebook and has been viewed over two million times – shows Ms. Buhler and her partner speaking to police in their home in the city of Ballarat. The Victoria Police officers are seen with a warrant.

Ms. Buhler, who is wearing pajamas, then offers to delete her post.

“My two kids are here – I have an ultrasound in an hour,” she says. “This is ridiculous… I didn’t realize I was doing anything wrong.”

But the officers respond by telling her she has been charged with “incitement” over a planned protest in Ballarat on Saturday. The event is part of wider anti-lockdown rallies.

“Now is not the time to protest about anything. Because to do so is not safe,” he said on Thursday.

Police Assistant Commissioner Luke Cornelius added: “[I’m] outraged to say there are still people in our community who think it’s a good idea at the time of this deadly pandemic to leave home and protest.”

But the incident has been criticized by human rights activists and opposition lawmakers on the left and right of politics.

“Arresting people pre-emptively for the act of organizing peaceful protests or for social media posts is something that happens all too often under authoritarian regimes, and it should not be happening in a democracy like Australia,” said Elaine Pearson of Human Rights Watch.

Critics also warned that it could further stoke anti-lockdown sentiment or conspiracy theories, noting the video had been shared among groups in Australia and the US.

To see this video footage for yourself take a look below. I for one find it quite appalling. It is hard to watch and sad to see, that’s for sure.