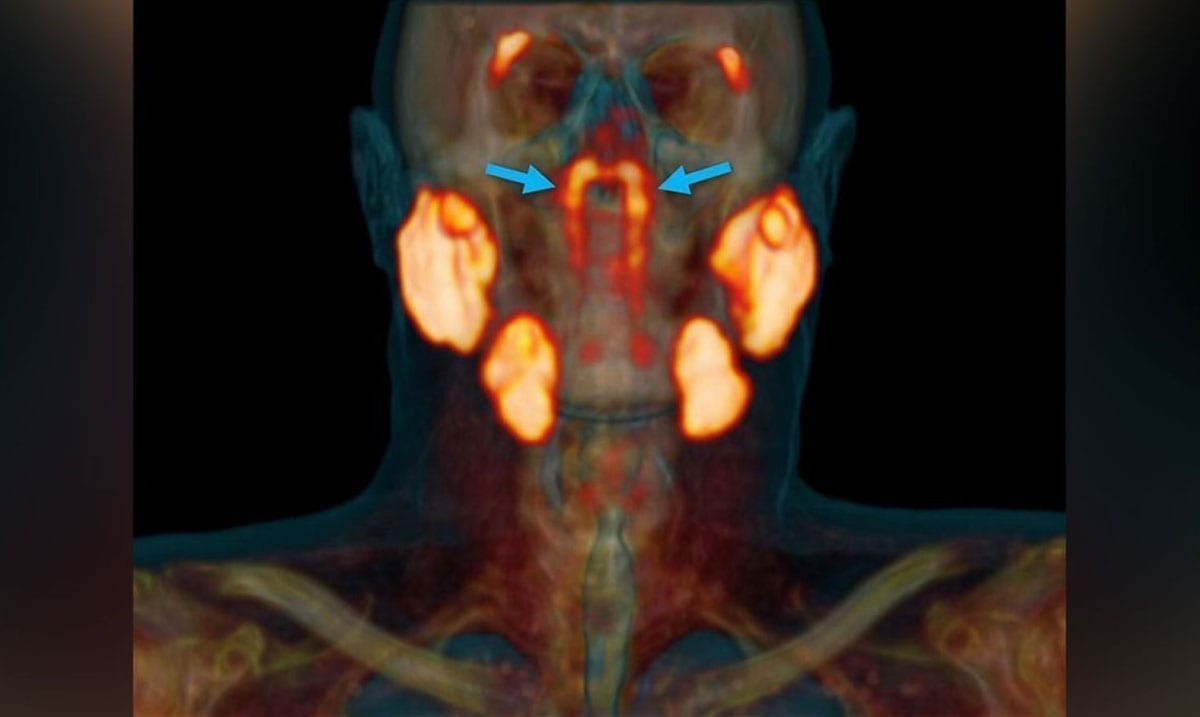 While we might feel like now we’re pretty aware of all of the things within our bodies, that isn’t necessarily the case. There are still mysteries even in our bodies and well, this one mystery might blow your mind.

According to CNN, a group of scientists from the Netherlands might have uncovered something that most would find unbelievable. These researchers came across something pretty special and possibly never noticed before when doing some kind of scan that would help them look for tumors as they were growing. This organ seems to some kind of gland and is within our skull where the throat meets the nasal cavity.

You may think we’ve learned everything there is to know about human spit, but it turns out the well has not gone dry. Scientists may have identified a previously undiscovered pair of salivary glands near the center of our heads, The New York Times reports. According to standard anatomy textbooks, the body has just three major sets of salivary glands: one under the tongue, another below the jaw, and the third near the ears. This potential fourth pair sits near where the nasal cavity meets the throat. Researchers noticed these unfamiliar structures while looking through the computerized tomography scans of 100 patients diagnosed with prostate or urethral gland cancer. They then examined tissues from two cadavers, and found that the structures were similar to salivary glands located underneath the tongue, they reported last month in Radiotherapy and Oncology. More research is needed to conclude whether these mysterious structures are newly discovered organs, or one of the hundreds of minor salivary glands in the mouth and throat. If the finding is confirmed, it would be the first discovery of salivary glands in about 300 years.

I know, you’d think by now we would have already discovered all of the organs our bodies had hidden away but this really goes to show how mysterious things can be even now in 2020. According to ABC 17, the lead author working on this study said that it was quite thrilling and for some time they were very skeptical considering what it was they thought they were seeing.

ABC 17 wrote as follows breaking things down a bit:

“We thought it wasn’t possible to discover this in 2020,” Valstar said. “It’s important it’s replicated and it should be done with different series of patients. It’s important to have confirmation of new medical findings.”

The “unknown entity” was only identified when the doctors were using an advanced and new type of scan called PSMA PET/CT that has been used to detect the spread of prostate cancer. PSMA PET is shorthand for prostate-specific membrane antigen imaging using positron emission tomography.

Salivary glands show up clearly on this highly sensitive kind of imaging.

“People have three sets of large salivary glands, but not there,” said study author Wouter Vogel, a radiation oncologist at The Netherlands Cancer Institute, in a news statement in May. “As far as we knew, the only salivary or mucous glands in the nasopharynx are microscopically small, and up to 1000 are evenly spread out throughout the mucosa. So, imagine our surprise when we found these.”

Many great scientific discoveries “come as a surprise — an incidental finding,” said Joy Reidenberg, a professor of anatomy at the Icahn School of Medicine at Mount Sinai in New York City, who wasn’t involved in the study.

“Luckily, these researchers were tuned into the data, and were anatomically savvy enough to note the unusual brightness in a region that was not thought to contain any salivary glands,” Reidenberg added via email. “As the famous (late French biologist) Louis Pasteur once said: ‘Chance favors the prepared mind.’”

The big issue here is whether or not these glands are their own glands or if they are part of the salivary gland system as a whole. Within these findings, they are broken down as something on their own and while it’s mind-blowing to read about, we’re not 100 percent certain what the case is just yet. I know, it might sound a bit out there but it’s still very interesting.

Part of the results of this study are listed as follows:

All 100 consecutive patients (99 male, one female; median age 69.5; range 53–84) demonstrated a clearly demarcated bilateral PSMA-positive area on PSMA PET/CT. It extended from the skull base downward along the posterolateral pharyngeal wall, on the pharyngeal side of the superior pharyngeal constrictor muscle (PCM-superior), with a PSMA-positive mass predominantly overlaying the torus tubarius (Fig. 1). The median cranio-caudal length of the detected area was 3.9 cm (range 1.0–5.7 cm). The total tracer uptake in the area of interest determined by visual comparison was on average similar to the uptake in the sublingual glands. This was in line with our earlier quantitative evaluation of tracer uptake in the glands of the head and neck [6]. This was consistently more than the uptake in the palate, which is known to contain a high concentration of minor salivary glands.

The dissected area from human cadavers showed a large aggregate of predominantly mucous gland tissue, with multiple macroscopically visible draining duct openings in the dorsolateral pharyngeal wall (Fig. 2). The gland was draped primarily over the torus tubarius, the anatomical structure formed by the cartilage that supports the entrance of the auditory tube. The gland extended caudally to the pharyngeal wall and cranially to Rosenmüllers’ fossa. The gland cells showed almost 100% cytoplasmic expression of PSMA with a luminal preference, comparable to the mucous aspect and PSMA-ligand uptake of minor salivary glands in the palate (Fig. 3; Fig. 1 in the Supplementary material). There was no amylase expression in the gland cells consistent with very low numbers of serous acini, similar to the sublingual glands. The 3D histology reconstruction illustrates the anatomical distribution of glandular tissue and draining ducts (Fig. 4; interactive 3D-PDF Fig. 2 in the Supplementary material). MRI images of a healthy volunteer showed a subtle tissue structure with lower signal intensity on the T2 sequence, compatible with glandular tissue, was identified at the expected location of the tubarial gland on the medial side of the torus tubarius (Fig. 3 in the Supplementary material). Small T2-intense dots were present within this tissue structure, which may represent the macroscopic duct openings seen in the cadavers and 3D histology reconstruction.

To learn more on this topic take a look at the video below. What do you think about all of this? I for one am quite blown away by all of this and think these glands could very well be something that holds their own.