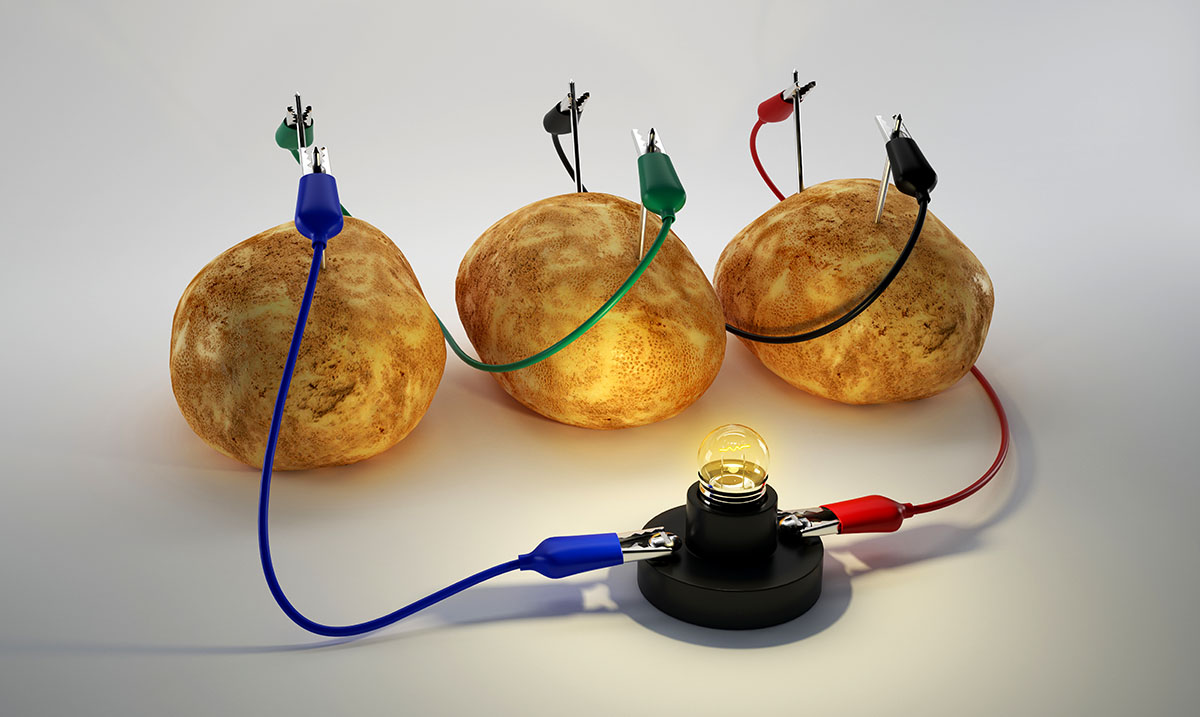 Potato Batteries Light A Room Up For Over A Month

By Gerald Sinclair February 6, 2020 No Comments

When we were kids we made potato batteries and other quirky yet simple things as ‘science’ experiments, but they are actually pretty mind-blowing when you break them down. You might not realize it but potatoes, in general, are capable of doing some amazing things.

I recently came across an article by the Smithsonian Magazine that was written back in 2013 and it brought the potato battery back into my mind. This article claimed that potato batteries could be used to light up a room for literally one whole month which is truly mind-blowing when you think about it. While simple, this kind of thing is quite effective when you look at it from this kind of stance.

Within this article, they spoke of research coming from the Hebrew University of Jerusalem that I until reading this article was not aware of. This research was surrounding the potato itself and those working to study it boiled it for eight minutes and found that it when used ‘as a battery’ could produce ten times the power of a raw potato. Isn’t that crazy? Of course, from here I dove down a rabbit hole of potatoes and batteries and remained entertained for quite some time.

Nature published these findings back in 2010 and as follows is written on the potato battery itself and how potent it can be:

Schoolchildren are routinely shown how to convert potatoes into makeshift batteries using copper and zinc electrodes. Haim Rabinowitch at the Hebrew University of Jerusalem in Israel and his colleagues now report a way to rev up the power output: by boiling the potatoes first.

Boiled or electroporated Solanum tuberosum produced a voltage up to ten times higher than raw potatoes. The authors calculate that energy production from these potatoes is five- to fiftyfold cheaper than commonly used batteries and can produce light, through LEDs (light-emitting diodes, pictured), more cheaply than kerosene lamps. Potatoes could thus provide an inexpensive way to power low-energy appliances.

The authors suggest that rupturing tissue membranes by boiling or electroporation alters the properties of the tissue sandwiched between the electrodes such that it enhances the energy-generating capabilities of the biological power cell. D.C.

Yes, potatoes can do a lot more than provide you with a nice meal. They can power your lights or even your computer/cell phone if you really needed them to. If used properly they could in many ways over time become cheap and organic means of powering things within reason. This would make a lot of sense for places where electrical infrastructure is not necessarily present.

Israel 21 reported as follows when these findings first were released/published:

Rabinowitch expects that charity funds will take the initiative and start providing economically disadvantaged people with the two sheets of metal and a short piece of electric wire, “so that they can make their own ‘potato sandwiches.’”

“The ability to provide electrical power with such simple and natural means could benefit millions of people in the developing world, literally bringing light and telecommunication to their lives in areas currently lacking electrical infrastructure,” says Yaacov Michlin, CEO of Yissum.

The research findings were published in the June issue of the Journal of Renewable and Sustainable Energy and were also featured in the Research Highlights section of Nature.

Interest in the new potato battery is growing. Rabinowitch recently received a letter from an entrepreneur in India interested in community building and environmental solutions. He is hoping to work with the Israeli team to mainstream the concept by creating kits for Indian schoolchildren and their families.

For more on this please check out the video below. What do you think about potato batteries and would you use them if you needed to? I for one think that they are a lot more than just a neat trick to show children, especially after learning this.