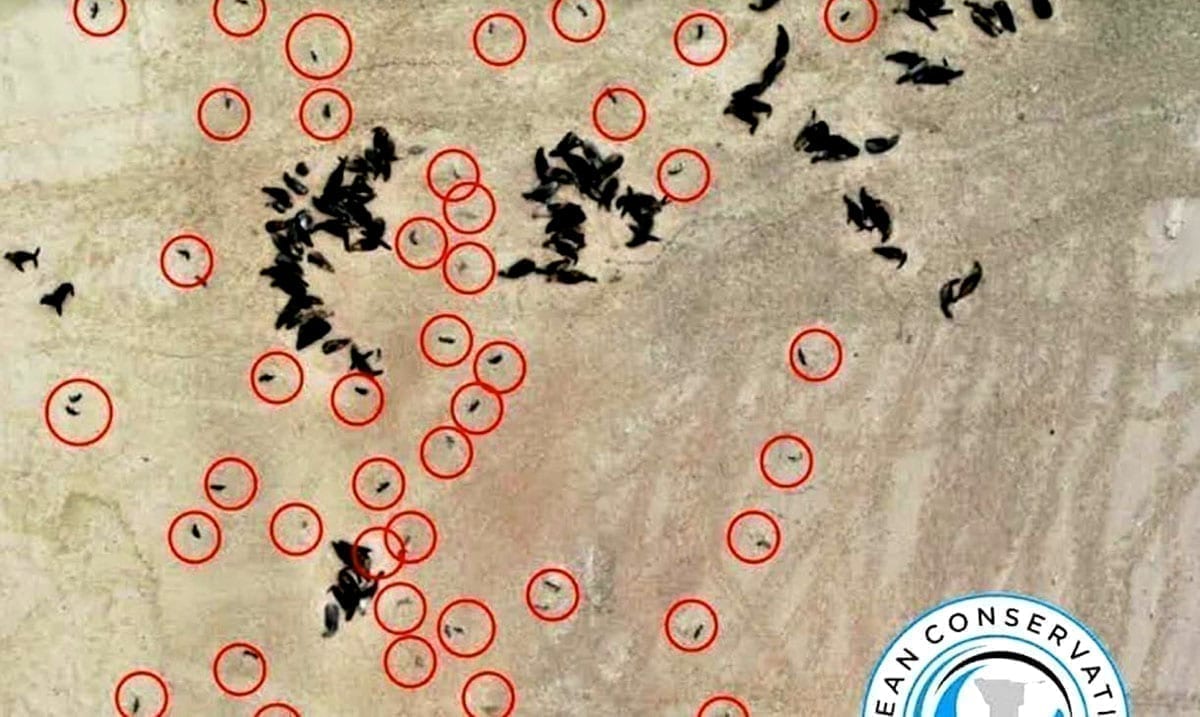 Over 5,000 Baby Seals Wash Up On Nambia Beach In Unpredicted Die-off

By Gerald Sinclair October 20, 2020 No Comments

While we do see this kind of thing on some scale from time to time the numbers present in this situation are mind-blowing. According to Bloomberg, something quite strange is happening.

As of late over five thousand seal pups were found dead at a place in Nambia known as Pelican Point. These pups were some that seem to have been born premature and likely died quickly after their births. That being said, such numbers all right there together is a bit of a loop to be thrown. Samples from these pups are being sent in for analysis but right now, we don’t quite know why so many seals have birthed prematurely.

These seals for those wondering are Cape fur seals and it is possible as a group the seals in this situation decided they did not have enough resources to care for their babies and birthed early. These seals when pregnant are able to seemingly abort on their own when they do not have the things they need, but again something on this scale is seemingly unheard of. With the state of the world, this might not be as surprising as some might feel it is though.

The Guardian wrote as follows on this topic:

The bodies were spotted by Naude Dreyer of Ocean Conservation Namibia (OCN), who flew his drone over Walvis Bay’s Pelican Point seal colony on 5 October and counted hundreds of bodies. “This is tragic, as it makes up a large portion of the new pup arrivals expected in late November,” he tweeted.

Cape fur seals are mostly found along the coasts of Namibia and South Africa, with females giving birth in November and December. When there is a shortage of food, they will often abandon their young or abort their foetuses.

Dr Tess Gridley, of the Namibian dolphin project and Stellenbosch University in South Africa, who is part of the research team monitoring the situation, said dead pups are commonly found at this time of year – but not on this scale.

Dreyer started noticing bodies in August, but became concerned when he found hundreds on one day in October. An estimated 150 pre-term pups have also been found in the Cape Cross colony, further north.

Total deaths are estimated at 5,000, although Gridley says it is difficult to be certain as many carcasses are eaten by scavengers, such as black-backed jackals. She says: “We are concerned about emaciated juveniles and adult females as well, which have also been observed at Pelican Point and to the north – indicating a wider scale to this event.

“This event could disrupt the normal breeding cycle at the affected colonies. Normally females will give birth to a pup each year, and they come into oestrus shortly afterwards and mate with the bulls. With females aborting pregnancies, they may come into oestrus earlier, but the males may not have organised themselves for mating. Also, the females are very thin and may not be healthy enough to reproduce.”

Lack of food, disease and toxins are all possible causes, but there is not enough data yet to confirm the reason, Gridley says.

While the concept of something opting to give birth early on purpose might be hard to swallow for some, for the seals if resources are low having babies could leave them without the things they need and force their offspring to suffer in the long-run. Sure, we still aren’t certain about what happened but this does seem to be the most likely scenario.