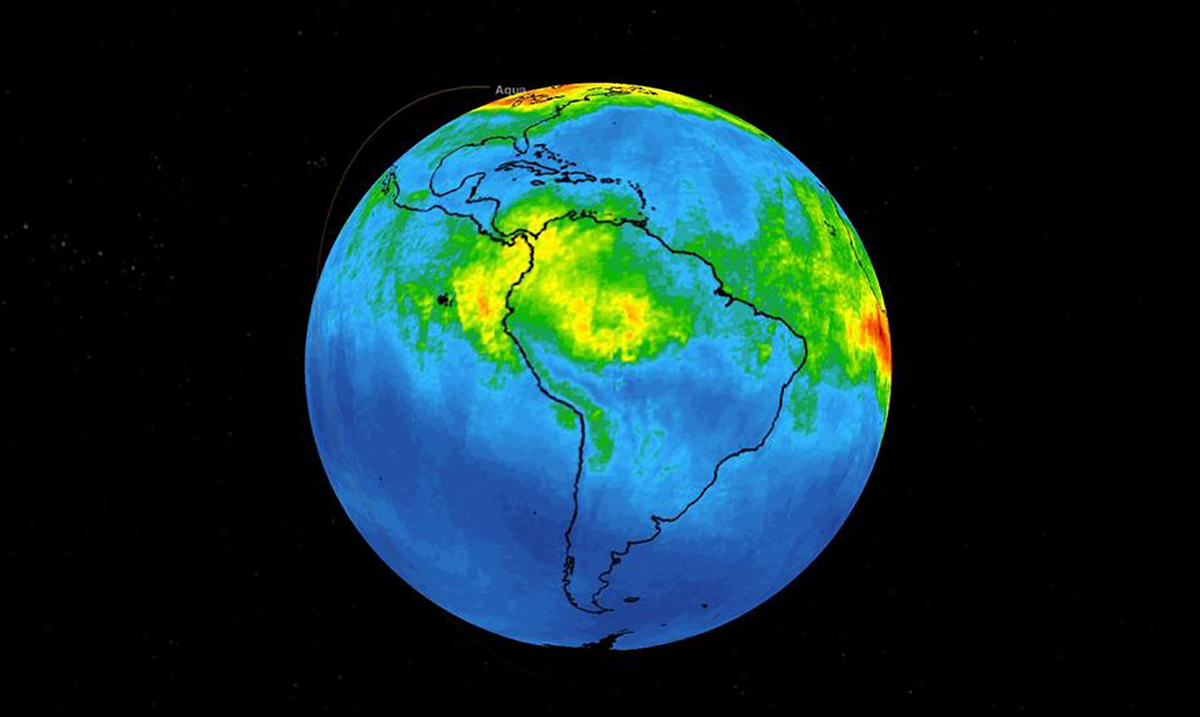 By Gerald SinclairAugust 25, 2019No Comments

NASA is always collecting images of the planet we call home via satellite but the images it’s managed to catch of the Amazon lately reveal something quite concerning. Not only are animals being harmed and losing their homes as a result of this enormous burn, but carbon monoxide is also being produced on a very large scale.

These images and the data associated with them come from NASA’s AIRS or Atmospheric Infrared Sounder. They cover the time from August 8th to August 22nd and it is important to remember that the Amazon is STILL on fire. According to a press release the carbon monoxide plume is blooming in the Northwest Amazon and drifting south and east in a more concentrated plume towards Sao Paulo.

In the image you are about to see, green indicates the concentration of carbon monoxide at about 100 parts per billion by volume and then the yellow and red are 120 PPBV and 160 PPBV. For those who might not be aware, carbon monoxide is an odorless gas produced by burning things like gasoline, wood, propane, and other fuels. When carbon monoxide accumulates, in general, it can reach dangerous levels and as a result harm the people and animals being forced to breathe it in. Carbon monoxide is a serious pollutant and contributes to the damage being done to our ozone layer.

In the press release noted above, NASA said the following in regards to AIRS and its use:

Carbon monoxide is a pollutant that can be transported large distances and persist in the atmosphere for about one month. It plays a role in both air pollution and climate change.

AIRS, in conjunction with the Advanced Microwave Sounding Unit (AMSU), senses emitted infrared and microwave radiation from Earth to provide a three-dimensional look at Earth’s weather and climate. Working in tandem, the two instruments make simultaneous observations all the way down to Earth’s surface. With more than 2,000 channels sensing different regions of the atmosphere, the system creates a global, three-dimensional map of atmospheric temperature and humidity, cloud amounts and heights, greenhouse gas concentrations and many other atmospheric phenomena.

The AIRS and AMSU instruments are managed by NASA’s Jet Propulsion Laboratory in Pasadena, California, under contract to NASA. JPL is a division of the Caltech.

While not everyone is going to grasp the severity of this kind of situation, the more who do the better. These fires in the Amazon need to be taken care of. Fires have been increasing in the area as the years pass and there doesn’t seem to be much being done about them at the moment.

BBC reported the following regarding the growing number of fires:

While the number of fires in Brazil is at its highest level for almost a decade, the data suggests that Brazil – and the wider Amazon region – may have experienced more intense burning in the past.

An analysis of NASA satellite data last week indicated that the total fire activity in 2019 across the Amazon, not just Brazil, is close to the average when compared with a longer 15 year period.

Looking specifically at Brazil, figures from Cams going back to 2003 show that the total CO2 equivalent emissions, used to measure of the amount and intensity of fire activity, are at their highest since 2010.

But according to the data, emissions in Brazil were higher in the mid-2000s, as the chart below indicates.

To learn more about this serious issue please check out the video below. What do you think about all of this? We all should be concerned about the world we live in and be working to do more for its safety.