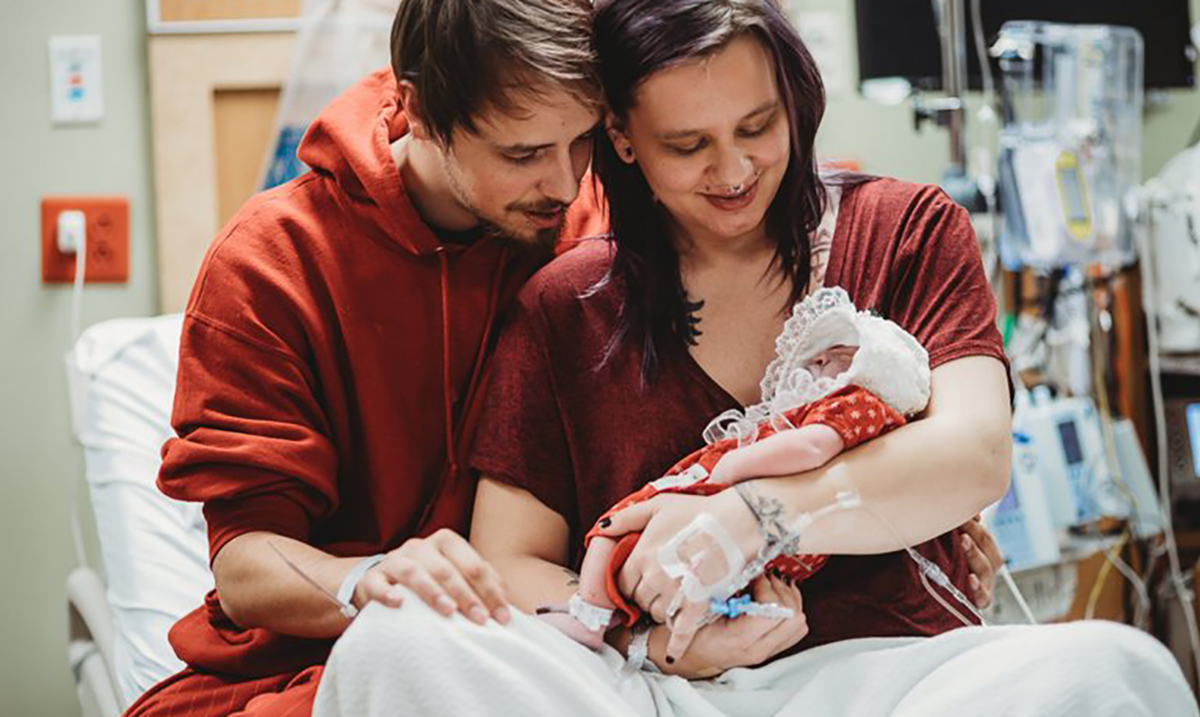 Krysta Davis was excited about her baby to come but when she found out that her baby had something known as anencephaly she was in shock. For those who do not know anencephaly is a severe birth defect that in most cases only allows babies to live a few days out of the womb at most. The couple were given several choices as to how they should move forward but the couple (Krysta and her partner Derek Lovett) chose to continue on with the pregnancy to full term so that they could spend some time with their child and then donate the organs given his/her passing.

Krysta went on to give birth to a beautiful little girl with whom the couple spent several days with soaking up every moment they could. Krysta said that the idea of donating their daughter’s organs is what sealed the deal for them pushing through to full term. She felt like she should at least give mothers who would be able to potentially bring their babies home the chance to do-so.

Krysta when speaking to The Metro said as follows about her daughter:

“We found out her favorite band was Fleetwood Mac and did a lot of normal parent things, but we also had an extra ounce to cherish that a little more.”

“I knew I had to be happy throughout the entire pregnancy for her, there was no point putting myself on her through that when we had such limited time together.”

“It was amazing feeling her kick, I didn’t know if she would move around at all but we found out, as she moved a lot.”

“As we got further along into the pregnancy she moved more and more, I could watch her little feet move across my belly.”

“I had nine months to carry her and fall in love but it was nothing compared to holding her and seeing her, I couldn’t see anything wrong with her when she was born, I was in love. It was really hard as we never knew how much time we were going to have with her.”

“After she passed the surgeon came in and told us he had not met a family like us in 12 years. It felt wonderful knowing that because of her two other kids get to go home, that touched us the most. Every time I look at the reminders of her, I treasure the moments. I still get a couple of tears coming down, they are perfect moments.”

“As hard as it is to give away those organs as it is your child, it makes a huge difference to others’ lives who wouldn’t have a second chance.”

While a hard thing to go through this couple managed to do what they felt best and in the end saved lives through allowing theirs a chance. While this precious baby was born with her brain exposed, to her parents she was perfect no matter what. Efforts like this are what keep humanity thriving. This amazing little girl while only here for a few days was able to change lives and that is something that will last forever.

This marvelous little girl’s name was Rylei her life held more meaning than most could dream of. Her parents made one of the hardest decisions they could have ever had to make. Because of Rylei’s heart valves being donated, two other babies got to continue living and that in itself is a miracle.

To see some of the best moments from this precious little girl’s life check out the video below. I guarantee you will be in tears by the time it is over with. So tiny and fragile but still able to do so much good in this world.