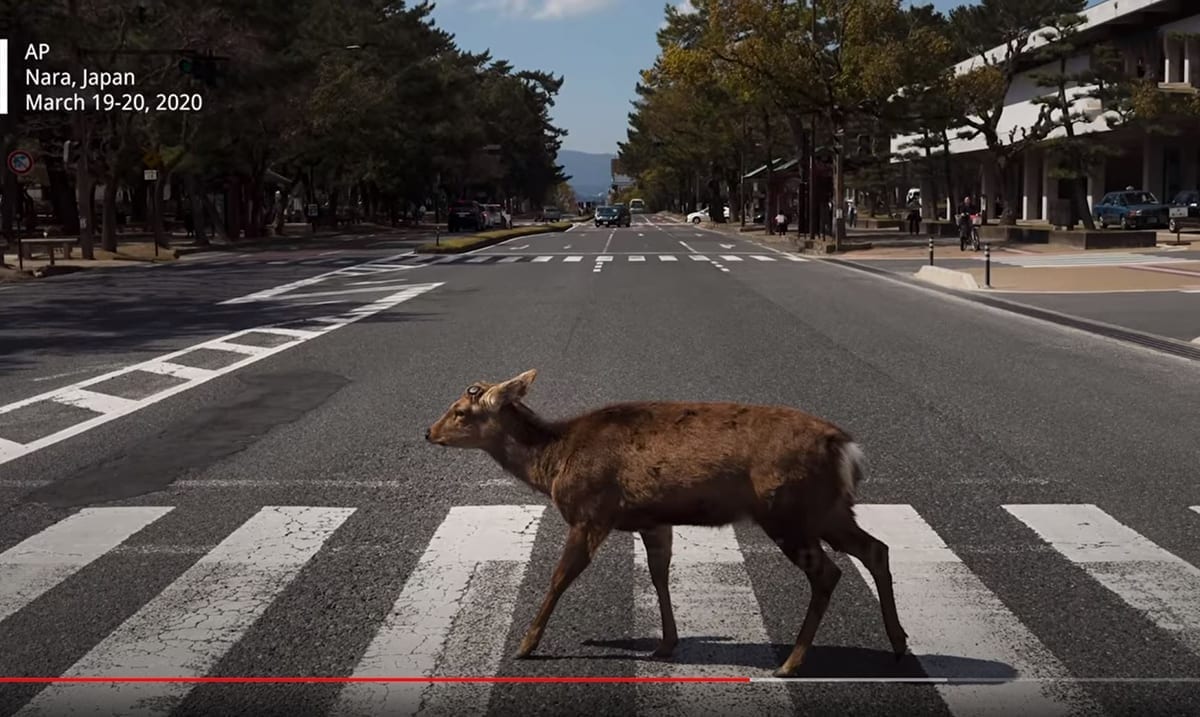 More Wildlife Spotted In Cities Across The World As Lockdown Ensues

By Gerald SinclairApril 12, 2020No Comments

With so many places across the globe being affected by the current pandemic things are changing quickly. It seems in many countries animals are coming back out and in some images, it really looks like they’re taking over even if they’re not.

There have been lots of different animals roaming the streets in different places it seems as this lockdown continues we are sure to see much more of this. Wildlife really is coming out to play. With the streets in many areas seemingly empty you can find things like peacocks in Spain, goats in Wales, and so much more.

It is important to note that while some are just curious others are animals that would normally rely on tourists for food who are now quite hungry and looking for something to eat. The effects of this pandemic hit hard in many ways, that being one of them. While it’s not a virus that animals are dying from it is one that as the dominoes fall does affect them in this manner.

As you can see in the video below there are some creatures coming out to see what they’ve been missing. While there aren’t entire herds scouring the streets the random wild animal here and here is quite interesting to see and even deer have been noted as roaming the roads in some places. No, we’re not yet facing some kind of animal take over but the presence of some of these critters is concerning.

The longer this pandemic goes on the more these animals will come forth. While it is a good thing that nature is getting a break it does seem things are getting weird in some areas as monkeys in Thailand have been fighting over scraps in the street because they are so used to seeing people who are willing to give them snacks. I know, this might be cute and silly to some but others can see where this is going and how serious it could become.

Fox Baltimore wrote as follows about this on their website for those who see animals here in the US strolling:

From deer being spotted around Baltimore City, to bears on the streets of North Carolina animals seeming to be taking back nature.

“They won’t hesitate to take advantage of people not being around,” Paul Peditto with the Maryland Department of Natural Resources said. “All of those species are opportunists.”

The DNR says none of this behavior is uncommon but with more humans staying home due to the Coronavirus pandemic, wildlife is more likely to venture out, especially young ones.

DNR says it’s been seeing an increase in wildlife-related calls during the pandemic, but they believe it may be because more people are home to observe the animals.

“We’ve seen calls for things like foxes running through yards and those are normal behaviors for those species,” Peditto said. “But for folks who are normally not at home, observing them gives rise to maybe there’s something wrong here.”

If you do see an animal like a deer or even a bear on a street or in a park DNR says if it loks OK just take in the moment but don’t approach it.

Who would have thought we would ever see times like these? While we knew it was possible there is no denying that we were without a doubt not ready. Please do your best to respect the wildlife coming out if you do happen to see any, these animals are just trying to make sense of things themselves.