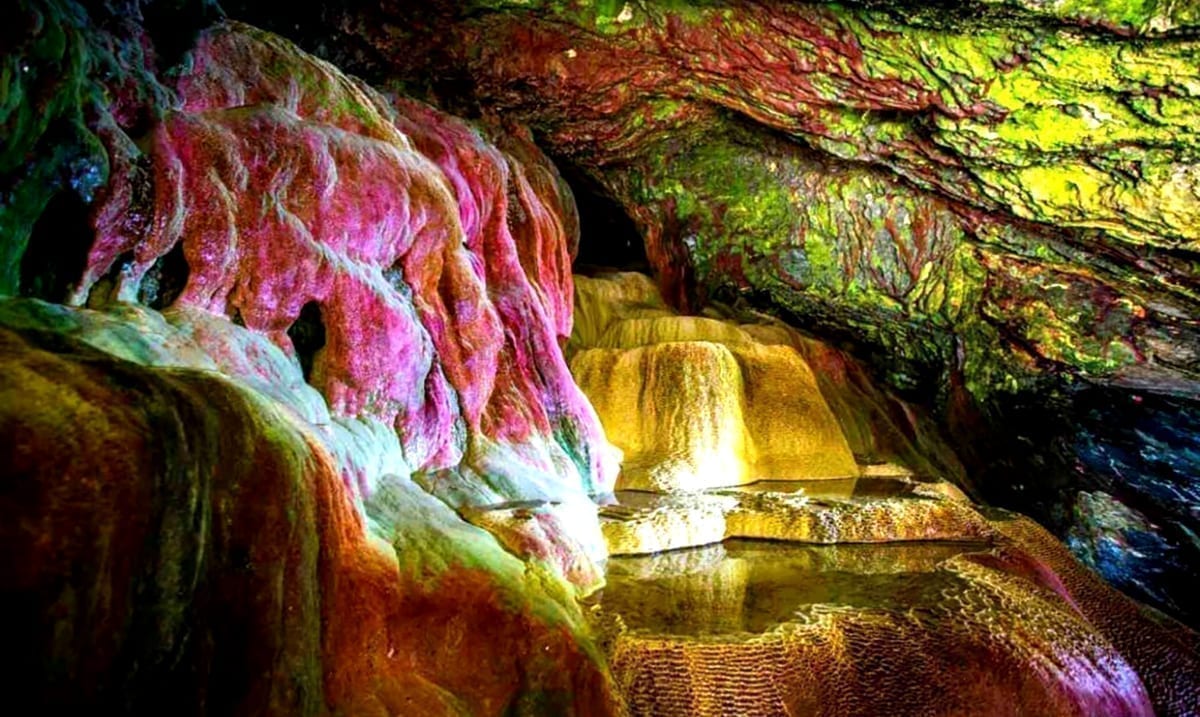 Mesmerizing Rainbow Cave Is Said To Have Powerful Healing Powers

While not many people seem to be aware of this, there is a ‘rainbow cave’ located in Cornwall that is easily one of the most beautiful ‘hidden’ wonders of the world in this day and age. This timeless place in the past was thought to hold some kind of elixir of life and well, it’s far more beautiful than most would expect.

While the British Isles, in general, are captivating and full of amazing locations, most people overlook this mesmerizing cave for some reason. This sea cave is not like most others because the walls within it are almost rainbow in color. This is because of the rocks and things of that nature within it. It also holds a spring that flows down through basins within in and well, people of the past once drank that water to heal themselves.

According to Cornwall Live, this water has been described as tasting like cereal milk which to me is quite shocking and intriguing for a number of reasons. This cave is also washed out twice a day because when the tide comes in, it is seemingly covered. That in itself is why it is important to pay attention to the tides and only visit this holy/powerful location when the tide is low.

Cornwall Live wrote as follows on this powerful location:

Along with the geological explanation for this holy well’s curative water, there is a far more intriguing one, steeped in legends and magic, which was documented by Mabel Quiller-Couch, in her 1894 book “Ancient Holy Wells of Cornwall”. The story goes that in 995 AD, the bishop of Lindisfarne, Aldhun, was transporting the skeletal remains of St Cuthbert, one of the most important medieval saints in the north of England. He was bound for Ireland, but his ship was blown off course and ended up on the north coast of Cornwall.

Aldhun settled in Cornwall long enough to build a church dedicated to St Cuthbert, a mile or so in from the coast of Holywell Bay, in what is now the village of Cubert. But eventually an oracle instructed Aldhun that he must return the relics of St Cuthbert to Durham, and as he was leaving from Holywell Bay, the saint’s bones touched the side of the well, giving the spring its magical healing powers.

A slightly earlier book, John Cardell Oliver’s “Guide to Newquay” from 1877 gives us a detailed description of the cave from that era: ‘It is a somewhat curious place. After passing over a few boulders the mouth of the cave will be reached, where steps will be found leading up to the well.

“This rock-formed cistern is of a duplicate form, consisting of two wells, having a communication existing between them. The supply of water is from above; and this water, being of a calcareous nature, has coated the rock with its earthy deposits, giving to the surrounding walls and to the well itself a variegated appearance of white, green, and purple. Above and beyond the well will be seen a deep hole extending into the cliff.”

“The legend respecting the well is, that in olden times mothers on Ascension Day brought their deformed or sickly children here, and dipped them in, at the same time passing them through the aperture connecting the two cisterns; and thus, it is said, they became healed of their disease or deformity. It would seem that other classes also believed virtue to reside in its water; for it is said that the cripples were accustomed to leave their crutches in the hole at the head of the well.”

“This well has Nature only for its architect, no mark of man’s hand being seen in its construction ; a pink enamelled basin, filled by drippings from the stalactitic roof, forms a picture of which it is difficult to describe the loveliness. What wonder, then, that the simple folk around should endow it with mystic virtues?”

However, the popularity of St Cuthbert’s Cave is recorded much earlier than Oliver’s “Guide to Newquay”, by William Hals in his “History of Cornwall”, which he compiled from 1685 until 1736. In his book, Hals writes: “IN this parish is that famous and well-known spring of water called Holy-well (so named the inhabitants say, for that the virtues of this water was first discovered on Allhallows- day). The same stands in a dark cavern of the sea- cliff’ rocks, beneath full sea-mark on spring-tides ; from the top of which cavern foils down or distils continually drops of water, from the white, blue, red, and green veins of those rocks. And accordingly, in the place where those drops of water fall, it swells to a lump of considerable bigness, and there petrifies to the hardness of ice, glass, or freestone, of the several colours aforesaid, according to the nature of those veins in the rock from whence it proceeds, and is of a hard brittle nature, apt to break like glass.”

As you can see below, the photos of this location are more than enough to make you want to visit. Not only is it beautiful but it even in photos seems to have an energy to it that draws you in, wouldn’t you agree? Who knows, perhaps it does hold healing properties that we otherwise discount.

Finally got to St Cuthberts Cave yay. Thanks @emilycurrah for showing me 😘💕🥰

Would you ever visit this amazing cave? I for one would be ecstatic to visit. It blows my mind that we are still able to see beauty like this in the world. To learn more and see more of this cave and others like it in the area noted above take a peek at the video below.