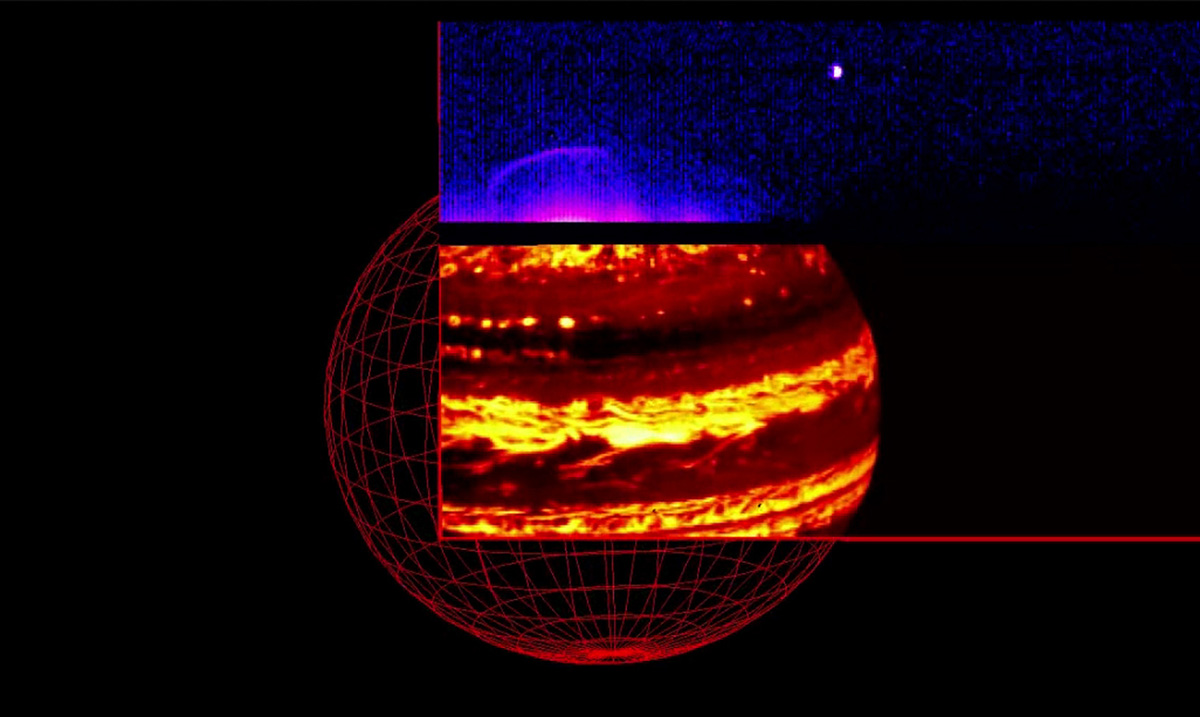 By Gerald SinclairFebruary 4, 2020No Comments

If you were not already aware, Jupiter’s north pole glows. It lights up in a way that most people would never be able to imagine and is truly mind-blowing, to say the least.

Here in our solar system, you won’t be able to find anything quite like the lights put off by Jupiter’s north pole. While it might look like something out of a science fiction film, these ‘fireworks’ seem to be going off constantly on the celestial body itself. Back in 2016 NASA’s spacecraft Juno passed by this enormous gassy planet and captured some of the most amazing footage we’ve ever seen in regards. That same year (and in the years before) the Hubble telescope was also able to capture some mind-blowing image/time-lapses and this all together gives us a great idea of what this glow might appear as.

All of the lights. See a @HubbleTelescope view of an electric-blue aurora glowing on Jupiter. #ThrowbackThursday pic.twitter.com/L0ehlaxsYW

Storm systems and other things of this sort are extremely unique on Jupiter as this in itself is not something you see in other gas giants as a whole. While this footage and these images were captured back in 2016, not many people are aware they exist. Your average person isn’t going to know just how amazing the glow of Jupiter’s north pole is and as a result sharing this information is quite important.

NASA’s JPL wrote as follows on their website in regards to all of this back in 2016:

The video is composed of 580 images collected over a period of about nine hours while Jupiter completed nearly a full rotation on its axis.

In this case, the exposure time of the imager was optimized to observe the planet’s thermal emission. However, it is possible to see a faint aurora and Jupiter’s moon Io approaching the planet. The Great Red Spot is also visible just south of the planet’s equator.

If you love space and all things in regards to the celestial bodies then seeing this footage will likely bring excitement to you in waves, I could not believe my eyes the first time I viewed this footage. It is also a good idea to note that when Juno swept by Jupiter some waves were also recorded that sounded almost ghost-like. These radiating from just above the planet itself. While we have known about these emissions as a whole for many years, we have never been as close as Juno was able to get until recent years which is a huge feat.

Now, in regards to the images captured by the Hubble telescope as follows was written by NASA:

The extraordinary vivid glows shown in the new observations are known as auroras. They are created when high-energy particles enter a planet’s atmosphere near its magnetic poles and collide with atoms of gas. As well as producing beautiful images, this program aims to determine how various components of Jupiter’s auroras respond to different conditions in the solar wind, a stream of charged particles ejected from the sun.

This observation program is perfectly timed as NASA’s Juno spacecraft is currently in the solar wind near Jupiter and will enter the orbit of the planet in early July 2016. While Hubble is observing and measuring the auroras on Jupiter, Juno is measuring the properties of the solar wind itself; a perfect collaboration between a telescope and a space probe.

“These auroras are very dramatic and among the most active I have ever seen”, said Jonathan Nichols from the University of Leicester, U.K., and principal investigator of the study. “It almost seems as if Jupiter is throwing a firework party for the imminent arrival of Juno.”

To highlight changes in the auroras Hubble is observing Jupiter almost daily for several months. Using this series of far-ultraviolet images from Hubble’s Space Telescope Imaging Spectrograph, it is possible for scientists to create videos that demonstrate the movement of the vivid auroras, which cover areas bigger than Earth.

Not only are the auroras huge in size, but they are also hundreds of times more energetic than auroras on Earth. And, unlike those on Earth, they never cease. While on Earth the most intense auroras are caused by solar storms — when charged particles rain down on the upper atmosphere, excite gases and cause them to glow red, green and purple — Jupiter has an additional source for its auroras.

To see this glow for yourself and get more information on this topic please check out the videos below. What do you think about all of this? I for one cannot wait to see what else we are able to find in space and photograph as a whole.