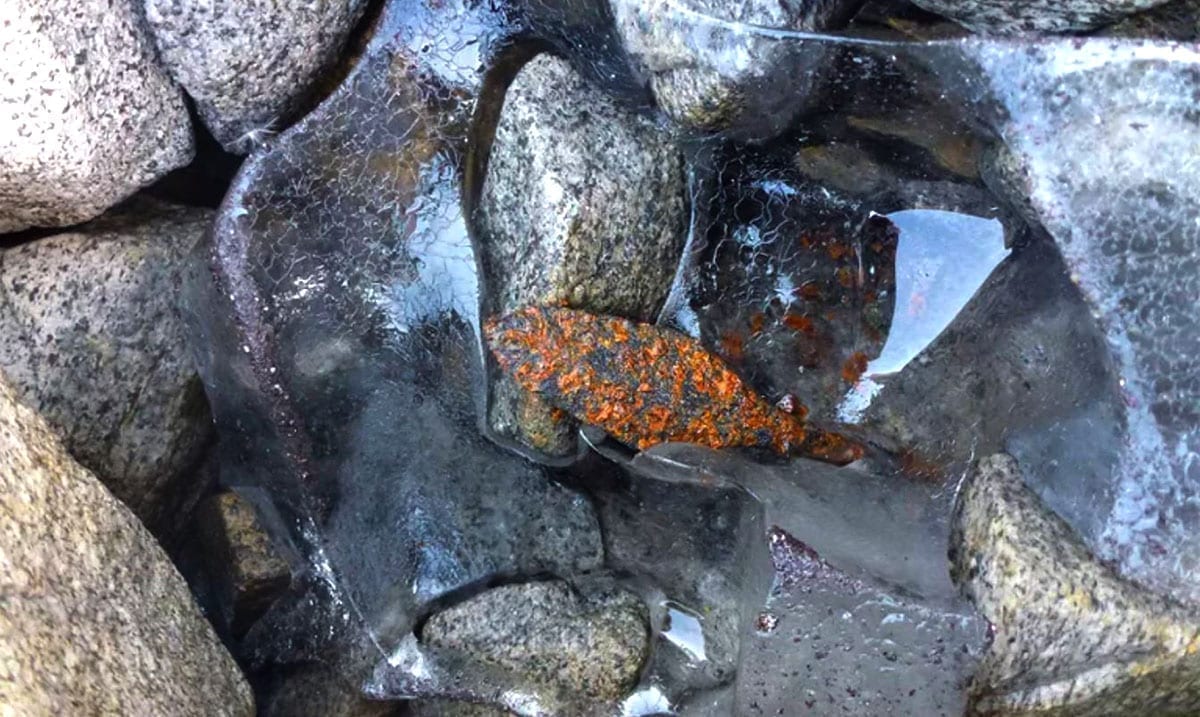 By Gerald SinclairNovember 29, 2020No Comments

In recent times it seems ice melting in Norway has revealed something that has long since been hidden. While we expect to find things inside of ice as it melts, these artifacts are in very good condition and well worth being aware of.

According to Gizmodo’s Earther, lots of ancient arrows and other hunting equipment have been found in a ‘remote Norwegian ice path.’ As the planet warms, more and more of this ice and ice elsewhere is melting, revealing a lot of amazing things but also causing quite a bit of alarm for our own wellbeing in the long-run. This discovery was heavily noted and dove into as it was made and since its findings have been documented in a study that was just days ago published in the journal Holocene.

This study was published under the title ‘Interpreting archaeological site formation processes at a mountain ice patch: A case study from Langfonne, Norway’ and its abstract goes as follows:

In the context of global warming, ice patches are increasingly important foci of high-elevation archaeology. Langfonne in Jotunheimen, central southern Norway, is uniquely suited to provide a window onto site formation processes and taphonomy in this novel archaeological setting. Here the site record from a systematic survey includes the largest number of arrows, bones, and antlers from a single ice patch worldwide. Combining data from these finds with the results of glaciological investigations provides an opportunity to interpret the influence of archaeological site formation processes and taphonomy on chronological and spatial patterning. It is inferred that the spatial patterning of artifacts at Langfonne is partly a result of displacement by ice movement, meltwater, and other natural processes. Nevertheless, the finds yield information regarding past hunting practices and the extent of ice at different times. An early cluster of finds from c.6000 cal yr BP may result from ice deformation which has brought early objects to the surface. The number of arrows increases from c. 1700 cal yr BP onwards, peaking around c.1200 cal yr BP. Artifacts from this period show a wide spatial distribution indicating both the preferential survival of more recent finds and that they were lost when the ice patch was large. Based on comparison with the chronology of natural bone and antler samples from the site, the greater number of finds of this date may also reflect a period of increased hunting.

Discoveries like this do not happen every day and the researchers working on this one may never find anything like it again. This site is one that has been useful in the past as according to Secrets of the Ice it was one that someone also managed to find a shoe on back in the year 2006. This show dating as old as at the very least ‘Viking Age.’ This ice patch seems to be a place full of mystery as we still do not know what else it may reveal as time continues to pass and melting continues to happen.

Secrets of the Ice wrote as follows on this interesting discovery and others:

A few words on the Langfonne ice patch, before we dig into the finds. Langfonne has retreated dramatically in the last two decades. It is now less than 30% of the size it was twenty years ago. This retreat is clearly visible in the landscape. Light grey, newly exposed scree and bedrock without lichen and moss surround the ice. The ice has split into three different ice patches. Langfonne is now only 10% of the maximum extent of the ice during the Little Ice Age (AD 1450-1920). The melt of Langfonne is part of a much larger pattern of retreating mountains glaciers here in Norway and worldwide, linked to global warming.

Langfonne was an ancient reindeer hunting site. We have recovered a record-breaking 68 arrows from the site, dating from the Stone Age to the Medieval Period. The earliest arrows are c.6000 years old. This is earlier than finds from any other ice site in Northern Europe and about 800 years earlier than Ötzi.

The finds also include the Early Bronze Age shoe and the usual scaring sticks. In addition, we collected nearly 300 finds of faunal material, mostly bones, and antlers from reindeer. With a few exceptions, the faunal material was deposited naturally without human interference. The age of this natural material provides an interesting contrast to the age of the artifacts.

We have carefully recorded the position of each find in the field using a high-precision GPS. We have also radiocarbon dated 102 finds, including nearly all the arrows. This has resulted in a very detailed archaeological record and has revealed mysterious patterns on the site.

The record shows that there are patterns to where the artifacts are found on the site. We discovered many artifacts in front of the lower ice edge. These finds are mostly poorly preserved, while finds along the sides of the ice and above the upper ice edge are better preserved. In addition, the Stone Age finds appear on the surface of the ice or very close to the present-day ice edge.

There is also chronological patterning, i.e. some periods have many finds while others have fewer. There are, relatively speaking, many arrows from the Late Neolithic (2400-1750 BC) and especially during the Late Iron Age (AD 550-1050). Other periods have few or no artifact finds. The number of dated reindeer bones also varies over time, but differently from the artifacts.

Preservation of the individual arrows is also variable over time. Not the way you would expect it with the arrows getting gradually better preserved the younger they are. Arrows from the Late Neolithic (2400-1750 BC) are well preserved and numerous, while arrows from the following 2000 years are poorly preserved and less numerous.

To learn more about this find take a peek at the video below. I know, to the average person it might not sound like much but things like this are important for us to understand the past. You never know what you’re going to find as time passes and this is a very good find, that’s for sure.