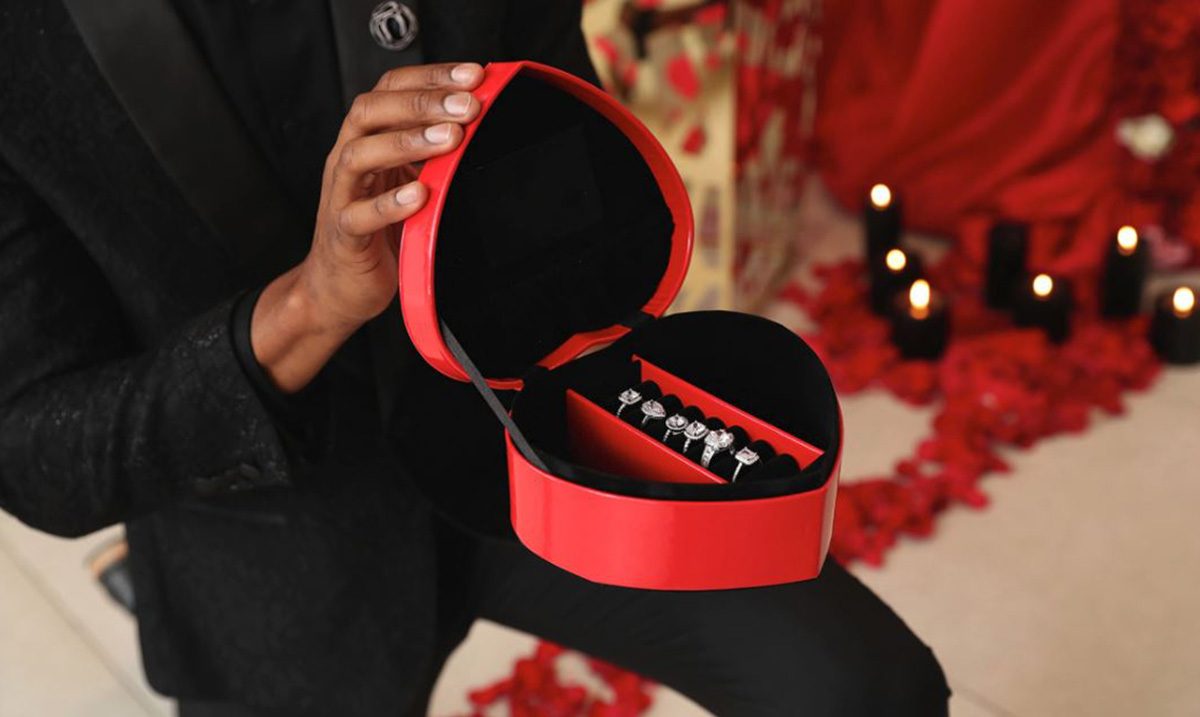 While the way a man proposes can either make or break things, this guy went above and beyond to please his lady. While most women would be more than ecstatic over just one ring this bride to be had 6 before her to choose from.

While you might think this would be something that happens all the time, we do not hear about it often. Being unique with the way in which you propose makes a difference and Dennis Brown just blew all other proposals out of the water at least for now. If you have the money to pull off something like this, it might end up proving to be quite the amazing memory.

We are in engagement season. This proposal from this weekend was amazing. Planned to perfection by Khia at @themeit_inc … we look forward to working with them on many more amazing proposals during this engagement season. Fellas if you need help planning the perfect proposal check em out! Can’t wait to share more from this amazing day!

Brown bought six different rings and had them all laid out nicely within a beautiful heart-shaped box when he got down on one knee before his girlfriend, Atara Dallas. He did this so she could get a look at each one and figure out which one caught her eye the most. For those who might not know, Brown is a model/former athlete and in regards to his proposal, he spent a small fortune. He hired event planners, florists, photographers, and so much more.

While she chose her ring he even had a banner prepared that read something like “Today, on your special day I had the pleasure of putting a smile on your face all day. For there is no greater gift that I could think of to give you.” Brown seems to be quite the romantic. On Instagram Brown wrote that he had won a life with Atara and that she deserved all six rings to choose from in regards to why he would buy so many.

The backdrop to their proposal setup read as follows:

“A woman whose heart is full of love and devotion to me, a woman whose loyalty to all those she loves stands unmatched, a woman whose generosity and willingness to help others around her flourish knows no depths.”

“A woman who single-handedly made me believe that a soulmate, a lover, a prayer warrior, a confidant, and a best friend could be wrapped up in one amazingly beautiful soul that was handcrafted for me.”

“That’s why today I wanted to give you the greatest gift that I could ever give you… my heart and soul completely, unwavering and all yours… will you accept and hold my hand in yours through this journey?”

Of course, Dallas was shocked at the whole situation and quite pleased. how would you react if someone proposed to you with six rings? Well, Dallas quickly said yes and chose one out of the six to be her own. For anyone wondering, she chose the teardrop shaped one. While after posting proposal pictures online the couple has received backlash from lots of Twitter and Instagram users, some are quite excited for the soon-to-be-married couple.

Some argue that Brown should have ‘known’ his fiance well enough to choose her ring for her and know what she likes but at the end of the day their proposal was more than amazing for Atara and that is all that matters. Realistically he probably thought she would like all six of the rings and just wanted to give her the option to choose her own, there shouldn’t be anything wrong with that.

People are always looking to make unique proposals. This man has set the bar high. He gave her a box of six rings to choose the one she preferred!#Uganda #Weddings #Kampala #Uganda pic.twitter.com/mgZPM3M1N1

As far as unique proposals go this one takes the cake for now. This was an event I am sure neither of the two will be able to forget and sets the stage for a marvelous wedding. Congratulations Atara and Dennis, May you have a wonderful long marriage.