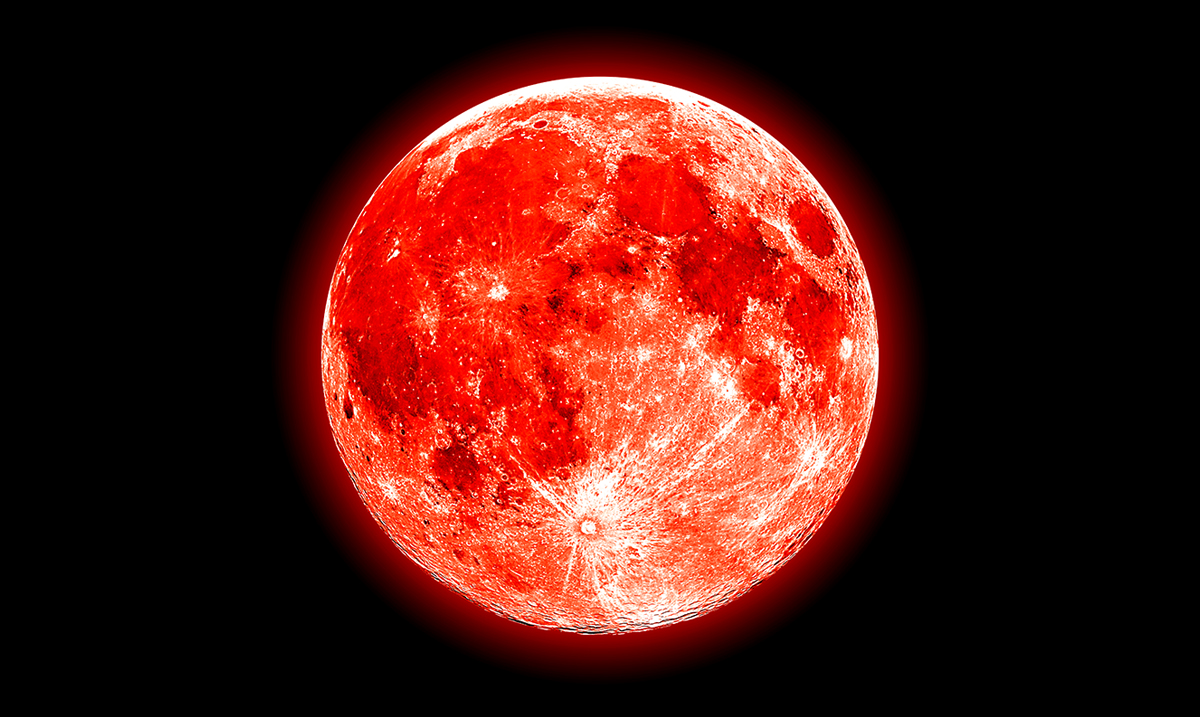 While some astrological events will happen quite regularly, almost losing their ‘magic’ in time (who runs outside just to see a regular full moon?) there are others that continue to captivate our attention with their rare appearances. You don’t want to miss this May’s total lunar eclipse as we won’t see another until next year.

The May total lunar eclipse ‘blood’ supermoon is set to occur in the final week of the month, and most of the US will be able to witness some or even all of it! On May 26, 2021, the earth will line up perfectly between the moon and the sun, which will cast a shadow across the moon and make it appear to be darker in color. 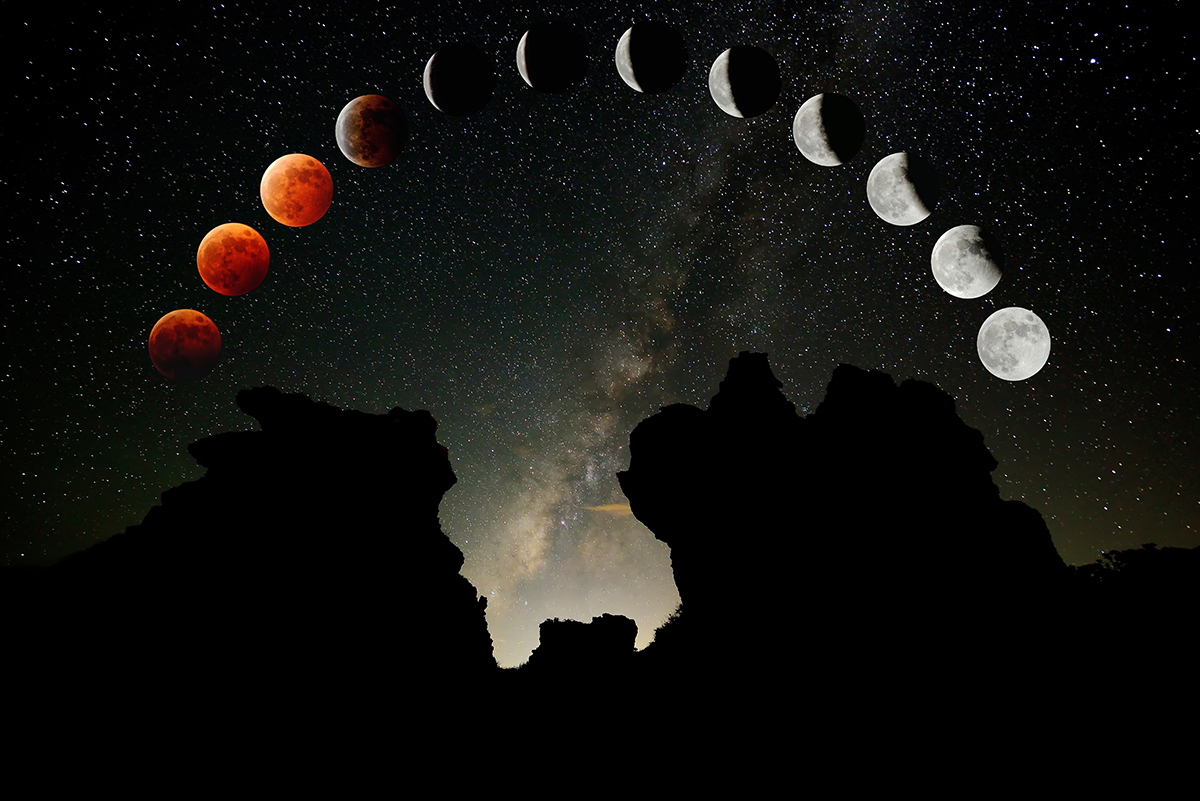 Panoramic image of the Total Lunar Eclipse of a (Super-moon) Blood moon ,Taiwan.

Whenever we witness a lunar or solar eclipse, these events are triggered by the movement of the moon and the Earth throughout orbit, lining up with the sun to impact our ability to view the light of the moon or the sun in some way. When we see the moon illuminated in the night sky, what we are actually viewing is the sun’s light reflecting off the moon and back to us. However, during a lunar eclipse, the Earth’s shadow falls upon the moon blocking this light. 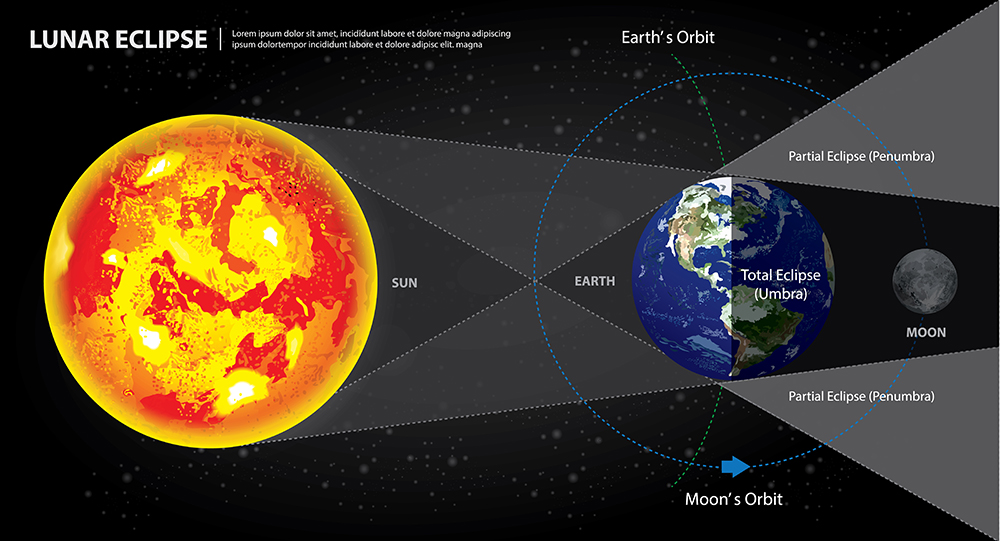 There are different types of lunar eclipse, depending on how closely aligned the sun, moon and Earth are with one another. The most common, and least interesting, is the Penumbral Lunar Eclipse. This occurs when the shadow that reaches the moon is only the faint outer shadow of the Earth, an incredibly weak shadow that barely causes a change to the light of the moon. During a Partial Lunar Eclipse, the sun, moon, and Earth are not completely aligned, meaning that the dark shadow of the Earth only covers part of the sun.

A Total Lunar Eclipse will include a partial eclipse before and after as the shadows works its way across the moon. However, when the shadow lines up directly with the moon, it will block most of the light that is coming through. The mall amount of light that does pass through the Earth’s atmosphere hitting the moon is refracted and scattered, altering its appearance – as such, the moon gives off a reddish glow known as the Blood Moon.

During ancient times, before this phenomenon was understood, it was often seen as a terrifying experience with the loss of light in the sky viewed as an omen. However, today the lunar eclipse is an astrological marvel that many enthusiasts will go out of their way to take in. While partial and penumbral lunar eclipses are far more frequent, the total lunar eclipse is rare.

How To Watch The May 2021 Lunar Eclipse

The May 2021 lunar eclipse will be visible from North and South America, Australia, and even parts of southern and eastern Asia.

The best views in the US are in the Western half of the country – think west of the Rocky’s.

Expect it to start in the early morning hours of May 26, 1:47 a.m. PDT, the earth’s shadow will begin to creep across the moon at 2:44 a.m. PDT, the partial eclipse begins, and about an hour and a half later at 4:11 a.m. PDT, the full eclipse will start.

The eastern United Stated will only be able to watch the beginning of the eclipse, and that’s because the moon will drop below the horizon and the sun will rise before the eclipse starts.

The Next Lunar Eclipse

If you miss out on the opportunity to watch this eclipse, you will have to wait an entire year before your next chance! On May 15-16, 2022 there will be another.

Will you be watching? To learn more about astrological events happening this year, click here!

During this time we can and should all be expecting a lot of hectic energies to come forth. Conditions will be changing, and your abilities will be forced into the light. Your self-control and adaptability will come in handy during this time and should not be overlooked.

Lunar eclipses are much stronger than most people realize. They hold the power of a full moon but times ten. They will force you to delve into the world of your emotions and well as the world of your future. This specific blood moon will be heavily affected by Uranus and because of that, we all need to be on edge.

While this eclipse in itself will be a challenging one, it will really be a time for thought. Do not obsess over the small things and remember how intense the effects of your actions can be on the people who care for you the most. Because the moon itself will be square Uranus at the time of this blood moon, chances are you and many others will also become quite impulsive and suffer from rapid mood swings.

Lunar eclipses like the one we are going to see soon will really bring forth the perfect time to work within and really teach us to heal the wounds before us. We will be letting go of things that hold us back and really showing our shadow selves. All that has been bringing you down will be highlighted and worked through in due time.

According To Astrology King,

Like a regular full moon only stronger, the Sun opposite the Moon of a lunar eclipse brings your home, family, and intimate relationships into sharper focus. Opposing forces such as work versus home, or what you need versus what you want, create inner tension and external pressures. This can lead to conflict and crises that drain your energy.

The lunar qualities of emotions and instincts reach their peak at a lunar eclipse. So use your increased emotional strength and intuition to overcome any relationship challenges. Subconscious awareness allows for an impartial and balanced look at your personal relationships. You will clearly see any relationship dynamics or negative feelings causing disharmony. A lunar eclipse represents a resetting of your emotions, clearing away the emotional baggage of the previous six months.