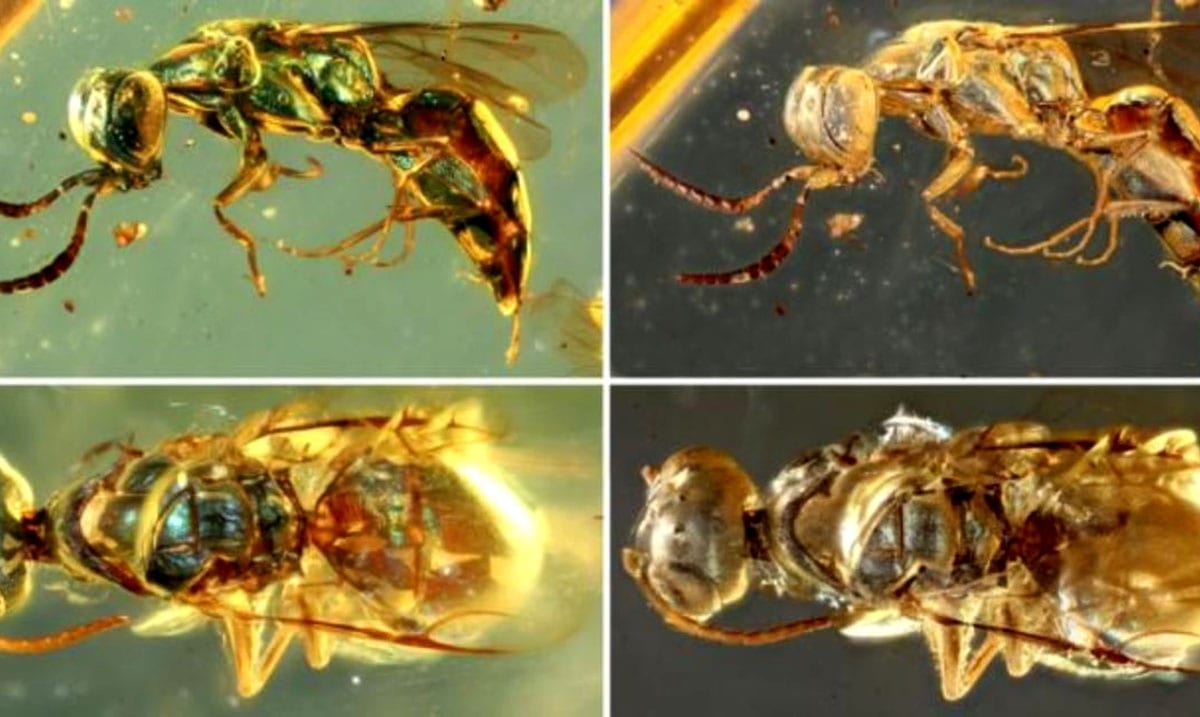 We’re always learning about new things that have been uncovered but this one is quite mind-blowing to me. Insects locked away in amber for millions of years that are much more spectacular than you’d expect.

It seems a team of researchers from the Nanjing Institute of Geology and Paleontology of the Chinese Academy of Sciences or NIGPAS for short has found some insects that are roughly 99 million years old and locked within amber so they’re also extremely well-preserved at that. These specific insects are quite interesting as now we can see their true coloration. Knowing that in itself is a huge thing and helps us better understand the creatures as a whole.

The abstract of a study titled ‘Structural colours in diverse Mesozoic insects’ that was published in the Proceedings of the Royal Society B on these findings goes as follows:

Structural colours, nature’s most pure and intense colours, originate when light is scattered via nanoscale modulations of the refractive index. Original colours in fossils illuminate the ecological interactions among extinct organisms and functional evolution of colours. Here, we report multiple examples of vivid metallic colours in diverse insects from mid-Cretaceous amber. Scanning and transmission electron microscopy revealed a smooth outer surface and five alternating electron-dense and electron-lucent layers in the epicuticle of a fossil wasp, suggesting that multilayer reflectors, the most common biophotonic nanostructure in animals and even plants, are responsible for the exceptional preservation of colour in amber fossils. Based on theoretical modelling of the reflectance spectra, a reflective peak of wavelength of 514 nm was calculated, corresponding to the bluish-green colour observed under white light. The green to blue structural colours in fossil wasps, beetles, and a fly most likely functioned as camouflage, although other functions such as thermoregulation cannot be ruled out. This discovery not only provides critical evidence of evolution of structural colours in arthropods but also sheds light on the preservation potential of nanostructures of ancient animals through geological time.

It’s quite puzzling as to why color is preserved in this manner in some amber fossils and not in others but by finding these perhaps in time we will be able to better understand exactly that. According to Psys.org, these researchers used electron microscopy in order to see just how these fossils were able to scatter light because of how preserved their exoskeletons were, and they seem to be almost glowing in that sense. This in itself might not sound like much but it’s quite a huge find.

Dr. Cai Chenyang who lead this study said as follows in a statement as noted by Psys.org:

“The amber is mid-Cretaceous, approximately 99 million years old, dating back to the golden age of dinosaurs. It is essentially resin produced by ancient coniferous trees that grew in a tropical rainforest environment. Animals and plants trapped in the thick resin got preserved, some with life-like fidelity,”

“At the moment we also cannot rule out the possibility that the colors play other roles besides camouflage, such as thermoregulation.”

For more information on this interesting find take a look at the video below. What do you think about all of this? I for one think anytime good quality fossils are found, it’s worth celebrating. Who knows what we will learn from these specific beings as a whole?